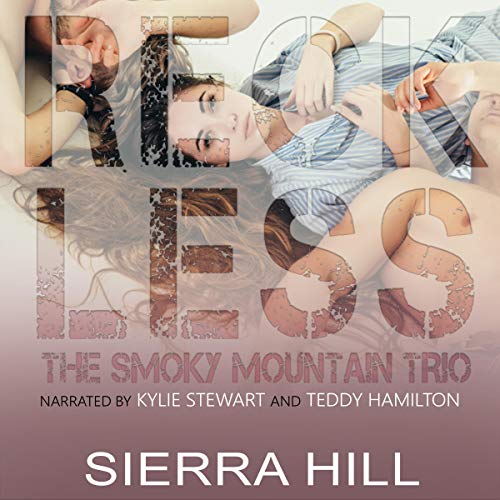 By: Sierra Hill
Narrated by: Kylie Stewart,Teddy Hamilton
Try for $0.00

An epic, MMF love story that spans the course of 25 years. It has drama, love, betrayal, sacrifice, and shocking cliffhangers you won't see coming.

Conventional wisdom says you can’t love two people at the same time, but I’ve proved that wrong. Because I did. I gave them my innocence and my heart to keep forever. They each together taught me how to love. And then they broke me. What should have been a memorable prom night turned into a nightmare that tore us apart.

I gave them my heart. Sage and London - two halves of my whole. But I crushed theirs when I left them. I’ve made some terrible mistakes in my life but leaving them was unconscionable. Now I have a second chance to make it up to them. I just hope they’ll forgive me for my past mistakes, so we can have a future together.

I’m a convicted felon who became a chart-topping musician. I've had the highest of highs and the lowest lows. And through it all, I've loved two people.

There were moments I didn't know how I'd survive without them. Truth be told, my life isn't worth a damn to me if I can’t be with them both. It’s together forever or nothing.

What listeners say about Reckless

I loved everything about this story. Cam, London and Sage shared quite an amazing love story albeit unconventional but that's what made the story so good. The only thing that could have made it a better story is if Jacob Morgan also narrated with them.

This book really colored trust, loyalty and love along with hot sex. The characters are well developed and I found myself rooting for them to find a way to be together.

Wow this book had so many ups and downs. The story starts off with 3 kids and we learn about their lives and how their friendship grows. Sometimes love has no boundaries and theses three proved that. Sage’s life makes me want to weep for him but he is strong in so many ways!

Teddy Hamilton and Kylie Stewart did a fantastic job. Teddys rustic voice is dreamy and Kylie brings the sweetness to them.

Sierra Hill takes us on an epic journey as three kids grow up together and struggle with their growing feelings for each other over the years. London is portrayed by Kylie Stewart who was new to me and gives a powerful performance. Cam and Sage are voiced by the always superb Teddy Hamilton. The story is told in three parts with each of the characters giving their own perspective. Ms. Stewart did an excellent job portraying London’s innocence as a young girl. She’s equally effective in bringing out London’s strength and vulnerability as her character grows throughout the timespan of the story. Teddy Hamilton is so good with angst and this saga definitely supplies it in spades. He brings both Cam and Sage to life and you definitely feel the emotional toll these boys/men go through on their journey to love and be loved. I have read and listened to a handful of ménage romances prior to this one. I found this story original in how it gives us the full picture of the characters’ journey from adolescents coming to terms with their sexuality to adults with life experiences that still find themselves drawn back to each other. All in all I thought it was a captivating story that was elevated by the perfectly cast narrators.

This was my first time listening/reading a story by Sierra Hill. Kylie and Teddy are two of my favorite narrators so it was nice to listen to them narrate this story. They always bring the story alive. Was nice to see the journey between London, Cam and Sage. I do not like to give a lot of details as I like to go into a story blind and just enjoy the roller coaster ride.

This was a beautiful emotional love about 3 best friends over many years. We watch their friendship grow into love and heartbreak over a lifetime.

We watch them experience their relationship through the lens of sexuality and the experience of the first blooms of desire and love. It is both sweet and bittersweet to watch them try to navigate their friendship while experiencing their attraction and love.

London, Sage and Cam's lives converge and separate over the years as hurt and heartache drive them apart. But their love and friendship always remains even when life took them away from each other.

The narration by Kylie Stewart and Teddy Hamilton was lovely and captured both their childhood and adult memories beautifully.

This was a sweet heartfelt listen that might have you looking twice at your own best friend. 😏

Reckless, The Smoky Mountain Trilogy includes #1 Reckless Youth, #2 Reckless Abandon, and #3 Reckless Hearts. Cam, Sage and London's Epic Love Story is beautifully written. They are wonderful characters, and they share a sizzling hot chemistry. The storyline is filled with drama, unpredictable twists and turns, and sexy scenes. I loved to follow them in their journey. Kylie Stewart and Teddy Hamilton did a fantastic job with the narration. This is a great MMF romance. #AudiblyAddicted

I have been looking for a MMF where they have a soul deep connection and Reckless by Sierra Hill seriously delivered. I was blown away with how beautifully this story was written. Each part telling one of their different POVs, this book with satisfy your need for a true, well rounded love story.

Cam, Sage and London have all known each other since they were mere children on the playground. They grew up together, learning every thing there is about life and all the awkward stages in between. You have the struggle of London falling for both boys, while you have Cam and Sage equally struggling with a growing attraction between the two of them. Combined with the layer of teenage anxiety of what’s to come, family problems and living in a small town, it obviously is not going to be easily accepted for all 3 of them to be together.

Life and a series of terrible mishaps rip these three soulmates apart but London is the cement of their foundation. She stands steady for Sage as he goes through adjusting to life as a felon, addiction, fame and is the one who reunites the three of them when they are older. Although she sticks around through all the emotional turmoil she’s not a doormat and I thoroughly enjoyed that about her character. Cam brings his own set of issues once they reunite, making their story equally heart wrenching as it is warming.

The narration for this story is stellar. Kylie Stewart is quickly climbing my list as a go to narrator, with a wide range of talent I am always finding myself surprised by her ability to embody whatever role she’s playing. Teddy Hamilton really shines in this audio. Every time I listen to a MMF where there are two characters voiced by one narrator it’s a bit hard for me to separate who is who. But not with Teddy. He easily slips from role to role with a simple change of his voice that is perfect. Not over done and is just the right amount of difference to make you really feel like it’s a whole new character. I haven’t found a narrator who does this as well as him.

Ultimately I loved the hell outta Reckless and Sierra Hill has solidified herself a new fan. Cam, Sage and London’s story is the epitome of what love is all about and I couldn’t get enough. This is a must listen romance.

This was an interesting listen for me. I loved the narration by Kylie Stewart and Teddy Hamilton. The story by Sierrra Hill was enjoyable, but not really in my lane as a menage book, so it took me out of my comfort zone for this listen.

Sage, Cam and London met in Kindergarten, and were inseparable ever since. Along the way, they fell in love, left town, came back together. It was a very long road for the three of them to get to a stable, fully-developed, loving relationship, and they had a lot of ups and downs along the way. It was an interesting listen.

This is a story of 3 friends from childhood to adulthood and the way they fell in love. The strong bond that they had despite the years that passed by, life changes that each went through. All roads always led back to each other. This is an MFM book in my opinion it wasn’t as hot as I was expecting. This is a first time for me reading a Sierra Hill book. I enjoyed this book and recommend it!! Narrators were amazing as well!!!