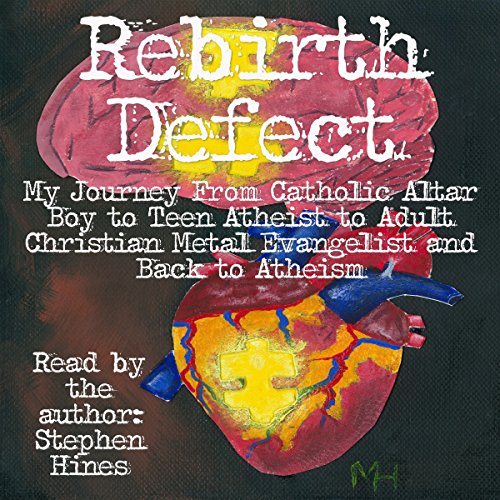 Okay, let's get one thing straight. I didn't write this book to de-convert anyone. Honest. So, if you're a devout Christian, Muslim, Hindu, Mormon, Catholic, Scientologist, or whatever, you just keep on doing what you're doing. No offense, but, as long as you're a good person who doesn't try to shove your beliefs down my throat or protest at military funerals, I really couldn't give a rodent's rectum about your spirituality. It's none of my business. Go to church. Don't eat pork. Worship Ganesh. Pray your rosary. Jump on couches and pretend you're on Oprah? Whatever. If it keeps you from going on a multi-state killing spree armed with grenades and an Uzi, knock yourself out! For your information, I wrote this book, well, for your information. That's it. Over the years I've been asked more and more how I went from being a Catholic to a teen atheist to a rabid Bible thumper (with a mullet!) to a (somewhat) mild-mannered atheist and I've always said, "It's a really long story. I'll write a book about it someday. I promise". Now, after repeating this oath a bazillion or two times, frankly, I'm tired of stalling. So, instead of procrastinating more or becoming rude to (mostly) well-meaning folks who are just curious, here you go. I done wrote a book about it. So if this book offends you, don't launch a campaign to re-convert me. Don't carpet bomb me with hellfire and brimstone emails. If you're really pissed off, I'm so nice I'll give you a list of names and home addresses of all the people who've pestered me for the story contained in this audiobook. So go bother them! It's their fault this book exists, not mine! Incidentally, if you feel so inclined, you can pray for me. That's cool. Whatever lights your altar candles, partner. That's none of my business either.

What listeners say about Rebirth Defect

this was an enlightening and interesting story about life and the different paths we go down. the author bares his life and I am sure anyone can enjoy and relate to some or all of it.

Hilarious, Cerebral, and Nourishing to the Soul

I started listening to audio books just a couple years ago and found my favorite genre to be biographies and autobiographies. I specifically enjoy autobiographies narrated by their authors because there is just something extra delicious about having someone personally telling you their story in their own words with their own tone. This book fits into my favorite category, but it is the first one that I have listened to that wasn't about some popular public figure or celebrity. This is a book written and read by an atheist public school teacher in Ohio, which touches way close to home for me as a fellow public school teacher in Ohio who is maybe more agnostic than atheist, but all the same my spirituality has not followed one consistent path. I listened to this book in just one day because the story was gripping! I blurted out loud with laughter multiple times at the author's hilarious idiom concoctions of curse words and pop culture references.

Who will love this book? Anyone who has had a change of faith in their life will love it (not just those who convert to atheism, but anyone who has struggled to align themselves with any variety of religion). Anyone who listened to and read Jim Gaffigan's books but wished that there was more profanity will love it (Stephen Hines sounds like him at some times and does hilarious impressions). Creative types will love it. People who grew up in the 80s will love the pop culture references. Anyone nosey enough to learn about a guy who could very well be your backyard neighbor will love it because it is just an epic life story. Anyone who raised their eyebrow at the title and was remotely curious about the born again metal band will not be disappointed because that part of the story was certainly interesting!

Who won't love this book? The easily-offended, perhaps. However, I think Mr. Hines' spiritual journey is one that will resonnate with anyone willing to hear about it.

the story started out slow but pick up and was funny and honest. Steven shares his story with honesty and humor anyone can appreciate and enjoy.