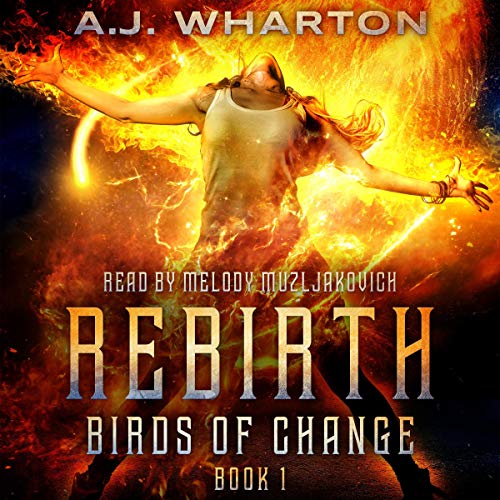 By: A. J. Wharton
Narrated by: Melody Muzljakovich
Try for $0.00

In a world divided between those who are talented and those who aren't, Vici is a city governed by an egotistical Praetor driven by his hatred for the gifted individuals - the Tallents - who he considers a plague. Tallents are forced into the shadows, for fear that they will be caught and executed.

An explosion rocks the city to its very foundation; the sole survivor a young woman with no memories of her past. Her only tie to her previous life is a silver necklace with the name Asylia inscribed. Risen from the ashes, she pieces herself together while taking control of her emerging fire talent. She must be careful; one mistake and she will end up like all the other Tallents who have faced the Praetor's wrath.

Harbored by a mysterious group called Revival, the young woman discovers that the people of Vici are disappearing at an alarming rate. Together with her new friends, she must rally against the Praetor's tyranny, racing to free the city in hopes that she isn't too late to bring peace to this world in turmoil.

What listeners say about Rebirth

First, the narration was well done. The naïvety of the main character was well voice acted and other characters voices were clearly distinct.

The universe and plot presented an interesting setting. The story contained a diverse array of characters, but the characters often suffered from a lack of depth. Motivations were incredibly simplistic and the plot was often predictable. This really tore away from the realism for me and I found myself desiring complexity of some form. It was a good story, but the telling could use some work.

I received a token for this audiobook in exchange for an honest review- so here goes (my first full review on the website). Overall, Wharton's debut novel is an entertaining listen. You can definitely see the scuffs and bruises of early work but in some aspects these bits can be as endearing as they are blemishing. The prose can be rather rough in some parts, doing a fair bit of "showing" instead of "telling", and often times repeats the subject to the reader as if we forgot what was talked about only a sentence prior (A glaring example of this is a section about eating pasta about halfway-2/3 through the book). My solution to getting through this without too much frustration was to just read this as a popcorn-fantasy novel written for a YA audience, not taking the prose or diction too seriously and just sitting back and enjoying the journey through the scenes. The biggest thing I enjoyed was the characters probably, they each had their own distinct feel (not to mention their Talents, of course) and each had endearing qualities (even the villains). The Greek mythos attributes of the narrative were also fairly intriguing and I kept itching to find out more and more as we dug deeper into the plot. The narrator, Melody Muzljakovich, did a great job giving the characters each distinct voices, really bringing them to life (especially Nyx's rippling fairy tone and the healer lady whose name I just blanked on).

All in all I enjoyed the novel for what it was and would read (and pay for) a sequel.

A gripping story of a woman with amnesia trying to make sense of her newfound deadly powers in a world where people with super powers are considered a threat. While the story line is not unique, it kept me waiting in suspense wanting to know what happens next.

The story is a brilliant concept as a series but I feel like it was missing some plot lines which may well be introduced in further books. The writing wasn't the best and the descriptions were quite repetitive but it was a fun listen. The narrator is brilliant with a voice suited to the main character and her change in voices, their suitability to each of the characters and the acting was flawless. I'm looking forward to listening to more of her work.

I was given this free review copy of the audiobook at my request and have voluntarily left this review.

I thought this was a very good listen. It has a lot of suspense, action and drama. The narrator does a perfect job of reading this book.

Great read with a few interesting twists here and there. Was going to finish it in a week or so, but couldn't help - done in barely 3 days.

Good job, Mrs. Wharton. And, of course, the narration was fantastic.

A great mix of mythology and mystery

A young woman without memories in the wake of a catastrophic event to a city tries to put the pieces back together while doing what she thinks is right and staying alive. The amnesia storyline isn't something new, but I think it was done well here and kept me engaged along with Asylia on her journey. The story mounts and doesn't rush anything but once it gets going there are some exciting events that take place and it all works well. The narration by Melody Muzljakovich is very good throughout, I loved her voice for the MC and thought it fit her. She had good delivery and pacing throughout the book and look forward to more from her.

The story mixed mythology, magic and good character building to make for an entertaining listen. I look forward to where the story will go from here.

I can’t express how awesome this book truly is. When I first took a look at it, I wasn’t sure, but once I started listening to it I couldn’t stop. The main character Asylia wakes up after a massive explosion in downtown. She has no memories and slowly puts her life together, unsure if she was the cause. She is in a city called Vici and its run by a man called the Praetor who wants to exterminate everyone with abilities (tallents). Asylia quickly falls into a group of others like herself with abilities ranging from elementals, to light casting, and even a fairy and demon. It’s an interesting twist on Greek mythology and dystopian fiction. At first, I was unsure of the lesbian romance, but towards the end of the book, I ended up really enjoying it and made the final twist that much more satisfying. The narrator was flawless and had a remarkable range. The story is told in two POV one of the main character Asylia, and the other Nyx (the fairy). The voices were distinct and impactful, I could feel the emotion in her voice in every scene. If you are into young adult fantasy, and love Greek mythology, or even just superhero stories I’d highly recommend this book. I can’t wait to see what else A.J. Wharton comes out with. I was given a copy of this book for free with the expectation of a fair and unbiased review.

The book starts with a girl who cannot remember anything. All she has to go on is a necklace she has with the name Asylia on it. She finds out that she is a Fire Tallent who can use fire for all types of things. Praetor is the villian in the book who searches out all the Tallents to be executed. Asylia is also being blamed for a huge explosin that reduced the city to ruins. She groups of wit other Tallents to find answers to who she is and a way to stop the Tallents from being executed.The real adventure begins when Asylia discovers that she isnt just an ordinary girl with fire powers. She may be the only person powerful enough who can save the city.

It's hard not to like the main Asylia as she is always positive and trying to right things in this world. Never giving up and striving to control the powers she has been reborn with. Greek mythology lovers will also like how the story mixes her in with Prometheus and Zues and probably a few others I did not know about.

The story is a little bit of a slow start because of all the character building which is normal for most fantasy books i have read. It speeds up towards the middle though and things start coming together with a lot of action. It reminded me of the book Circe but with more focus on the fantasy element.

The narrator was perfect for this book I think since it is a YA Fantasy book. With a very clear and bubbly voice you can't go wrong.

I can't wait for the next book in the series to see what A.J. Wharton comes up with next!
I was given this free review copy audiobook at my request and have voluntarily left this review.

This is an awesome story. The writing and narration are equally astounding. I'm looking forward to the next installment.

I liked it! This book is very interesting because it's not your ordinary fantasy. The narration is great and will keep you entertained. This author does an excellent job with the character builds and plot. I look forward to reading more books from this author. I was given this free review copy audiobook at my request and have voluntarily left this review.

The author: Congratulations to A.J Wharton. Her first audiobook. See Audibles author description (they do it much better than me :D)

The feel.
See the books blurb for what the story is about, but as some additional opinion..
It is nice to see a book that is so modern in it writing, with many of the tired stereotypes of older fantasy completely absent and modern ideals touched upon such as freedom of sexuality, mild same gender love, androgyny and including strong (but still quite feminine and full of young mischief) lead female characters, whilst not detracting from the male characters.

Described as a ‘young adult dark fantasy’, the story is of course also suitable for anyone else who likes simple tales of good and bad, without too deep a plot or useless masses of archaic and complicated wording. The story has a ‘wide eyed innocent’ kind of feel to it.

The flavour.
I got a little bit of the flavours of Hunger Games, Maze Runner, Junior X-men and ‘Harry Potter’ from the story and from the innocence of the characters. FYI though, there are a few scenes not suitable for children.

Also, the story and the lead character for most of the book has a taste of ‘Alice in Wonderland and The Wizard of Oz’ where female leads were innocent and trying to work out strange new worlds.

Triggers.If you worry about triggers, there are one or two.

The Narrator.
Melody Muzljakovich is very talented and has a naturally beautiful voice. She gives the main character a soft and other-worldly voice that fits the characters innocence. Other characters are portrayed in an array of accents and tones and really done very well, which makes the characters more alive. A great voice actor.

In a world divided between those who are talented and those who aren't, this audio was well written by A. J. Wharton
and the narrater was great too Melody Muzljakovich can't wait for volume 2