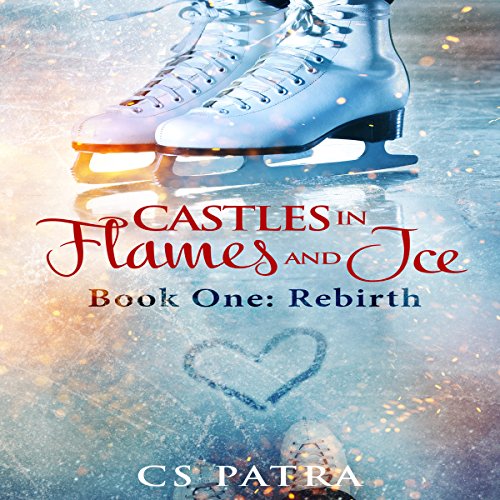 By: CS Patra
Narrated by: Jessica Schell
Try for $0.00

Rachna Sengupta always knew that she wanted to be a figure skater. Ever since she laid her eyes on Jenny Nguyen, she fell in love with the sport. She knew she wanted to be just like Jenny one day. She was well on her way too, getting better with her skills and ready to take on the world. However, it all came crashing down when an injury took her out of competition. Broken up by that, she takes the year off from the rink and begins to contemplate retirement.

One day, Rachna goes to the rink in hopes of reigniting her love for skating. In doing so, she manages to capture the eye of an unlikely person; her idol, Jenny Nguyen. Jenny is impressed by Rachna's skill and decides to help her get back on the ice. They begin to put together routines for the upcoming Charity Cup. If anything can get Rachna back in the sport, this is it. As she and Jenny are working together, something is beginning to bloom between them. They are growing closer and things are starting to heat up. Rachna soon finds herself falling in love with more than just Jenny's skating. Will her new feelings hurt her chances at getting the gold?

What listeners say about Rebirth

i like darsha's light voice, but Jenny's voice sounded too deep. I thought it was a male character prior to hearing her name.

the romance felt too fast. They skated together a few weeks, the suddenly the star jenny is willing to give up her career for rachna. I think if jenny didn't move so quickly emotionally, the book would have been better. There is a lot of skating, but you don't have to know what the terms mean. There are a few other side characters, but they're like the star trek red-shirts who are introduced as being significant but don't really serve much purpose. I like how the romance focused on personality and what the girls do and how much time they spend together. Too many "romance" novels focus on lust, but not this story.

A story about regaining confidence and returning to a beloved sport after a downfall, and finding a romance in the process.

I wish that the ice movements (triple axel, double toe loop, Salchow, etc) were explained/described. The differences weren't made clear when the moves were initially introduced. It doesn't detract from the story, but the writer could've gone into the terminology or fully described it more.

The narrator used a few different voices. There wasn't a strong amount of differentiation among them. For instance, there was a positive friendly voice (used for the ballerina friend and the friend who worked at or owned the practice rink), the Rachna main character/narrator voice, the Jenny voice, and a deeper voice for random coaches.

Character emotions were portrayed well. The story didn't call for a large emotional range, but what was performed was done well. I think the worst thing I heard was a mispronunciation of the word "pho." Overall, the voice work suited the story.

Listeners/readers get to follow Rachna's struggles. Her family isn't supportive of her dream. She gets some hate online while trying to make her comeback. She has some self-confidence issues to work through. As she works on her ice routines, she also winds up dating a fellow skater she's looked up to for a long time. That's the romance element. I thought the main character was a sweet person, and I wanted her to succeed.

Sadly, I didn't find myself falling in love with Jenny, the love interest. There was some distance there. I think the romance may have snapped on too fast without enough build up. That's just me, though. I do think Jenny was cool. There were decent reasons for why Rachna would be interested in her. Jenny's attitude was a good match for Rachna's, and I can understand why they got together.

Story was predictable. It lost my interest towards the end. I don't normally read sports stories. If you do, you'd probably be able to stick with this longer than I did. The figure skating made for an interesting setting.

I liked Rachna as a character and her motivation for trying to land a quad. I was rooting for her, which is why this gets a 3 for me instead of a 2. Had the romance not felt as sudden, I would've given it another star.

Good for people who want a light/sweet/cute romance story about returning to something once loved, and realizing you still have the skills to do it. Prior knowledge of figure skating not required. Also has racial diversity that feels genuine and not forced in for brownie points.

I was voluntarily given a copy by the author, publisher, and/or narrator. I chose to give an honest review.

Rachna Sengupta had been off the ice after a devastating fall on the ice during competition. Now her her idol Jenny Nguyen was helping her train for a Charity Skate Competition. This is a great story of athletes on the ice. A warm tender romance. Great performance. Recommend.

Figure skating with a side of romance

This is a very sweet story about an ice skater named Rachna returning to the ice and becoming stronger thanks to two close friends and her professional hero Jenny who believes in her. The emphasis in this story is on the skating, and it works as a sports story. It’s also a  low-key romance between Rachna and Jenny. The story treats their growing affection with each other as no big deal.

I enjoyed listening to this, and part of the reason was the skating. The other part is that I’ll listen to a love story with any combination of characters (MF, MM, FF, MMF, etc), but it was a particular treat for me to listen to a story with female leads from backgrounds different than my own. It made the story seem more interesting simply because of the variety of humanity involved.

I did notice a few verbal ticks from the author. She liked the word “However” quite a lot. It was very present in the narration and the characters’ dialogue, and that did not help make a difference between the narrative passages and the places where the characters were speaking.

The narrator was capable and did what she had to do.  I didn't love her voice, but that's not because there was anything "wrong" in how she used it to perform.  The audio sample is a good indication of what you'll get with this one.

This story is perfect for those interested in women's ice skating, second chances, chaste first time romances (they only kiss and not more than three times), and continuing series because the ending set up the promise for more.