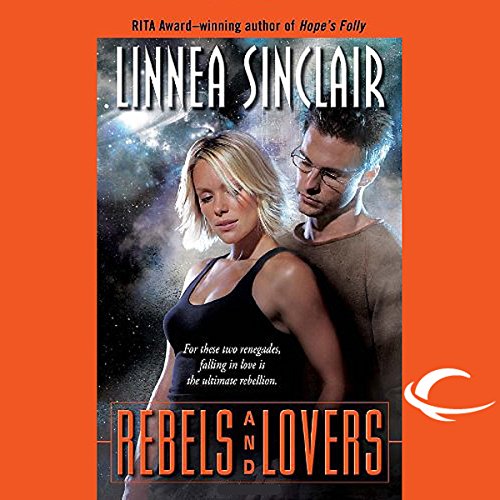 By: Linnea Sinclair
Narrated by: MacLeod Andrews
Try for $0.00

It's been two years since Devin Guthrie last saw Captain Makaiden Griggs. But time has done little to dampen his ardor for the beautiful take-charge pilot who used to fly yachts for his wealthy family. While Devins soul still burns for Kaidee, she isn't the kind of woman a Guthrie is allowed to marry - especially in a time of intergalactic upheaval, with the family's political position made precarious by Devin's brother Philip, now in open revolt against the Empire. And when Devin's 19-year-old nephew, Trip, inexplicably goes missing after his bodyguard is murdered, this most dutiful of Guthrie sons finds every ounce of family loyalty put to the test.

Only by joining forces with Kaidee can Devin complete the mission to bring Trip back alive. And only by breaking every rule can these two renegades redeem the promise of a passion they were never permitted to explore. At risk? A political empire, a personal fortune, and both their hearts and lives.

What listeners say about Rebels and Lovers

Linnea Sinclair really does get it right with this series. Heart pounding action, a LOT of surprises that aren't expected, pathos between characters, and just the right dollop of romance - never over the top or eye rolling.

This is the fourth (and likely last) in the series. And it ended up being my favorite - less 'magical mysticism' of the first 2 books and straight out dockside action.

This series is highly recommended by me - loved every book immensely.

The one detractor for me were the narrators. The accents were all over the place (especially this last book's narrator) and really detracted from the story.

The voices for main characters switched. His voice for the male lead was so whiny and weak. I think I will stick to reading this one myself.

I like this series very much; however, this is my least favorite . The narrator did a poor job in the different character voices and throughout it was stilted as if reading from the page and unfamiliar with the story. His constant clicking/skurp sound at tbe end of every sentence due to excess spit was very distacting.

This is an action packed sci-fi romance and had me on the edge of my seat.

However, there were times when I wasn’t sure who was speaking at first or there was a very obvious change in the narrator’s voice, like it was a new recording.

I will still listen to it again.

Seems like a good in between story of the Series.

Good story line will be interesting to see how it's tied together. hopefully not last one.