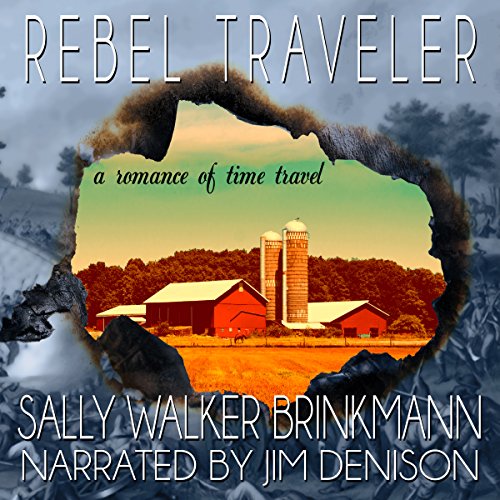 A Romance of Time Travel
By: Sally Walker Brinkmann
Narrated by: Jim Denison
Length: 6 hrs and 4 mins
Categories: Romance, Fantasy
3.5 out of 5 stars 3.5 (13 ratings)
This title is included in Audible Escape

The year is 1862. Dan Fields, a Corporal in Stonewall Jackson's Rebel Army, is marching near Bath, Virginia. At the height of a blizzard, he touches the cross at his neck and remembers his Granny's warning: "You won't die in this war, but you may wish you had". Seeking refuge, he stumbles into a cave, and suddenly finds himself in 2010. Cold and starving, Dan stumbles onto the farm of beautiful Allie Johnson, who saves his life. But Dan has been followed into the future by his nefarious cousin, Dillon, who wants the cache of gold hidden by Dan during the war - and wants Dan's girl as well. Dan must fight the effects of living in a time not his own, and in the process somehow neutralize his ruthless enemy from the past - or both he and his newly beloved may be swept away by the...Rebel Traveler! The grand debut of a striking new voice in romantic fantasy!

I enjoyed the story line, but the narrator's voice was too monotone. I think it would have been better with more feeling in his reading.

This book is a must read.

I thoroughly enjoyed this book. It has literary quality, and is engaging as a historical novel. The author has the civil war period down cold.

The author's descriptions and details were excellent. I felt like I was in a dream.

His voice fit the period and was easy on the ears..

It made me smile.

I recommend this book to all my friends and fellow book-lovers.

Another barely readable book for me. It was kind of silly that soldiers kept falling through the time portal. First Dan, our hero, came through, then Dillon, the killer, then Johnny, another Rebel soldier. Amos and James came through too but they were killed before they were even introduced, which I just found stupid. Then we found out the lawyer Joe Duncan had come through years before. That’s a lot of time travelers for one book. The whole story was rather silly and the narrator only made it worse.

Then we had Granny, whose ghost kept roaming around taking care of Dan, and giving him warnings. She was a seer. As was Maggie, who also warned Dan of Dillon’s whereabouts. So, he left one seer in 1862 only to find himself a new one in 2010. Oh, and we had the geese that helped Dan and Allie and the wolves, too.

And then we had the heroine being TSTL. On her wedding day she decides to go for a horseback ride. Really? Knowing Dillon was not far off and she decides to go riding? If I hadn’t been at 93% I would have stopped reading. I can’t stand heroines who are that stupid. Of course, she got caught by Slim Purvis, Dillon’s partner in crime, but that didn’t work out so well since the goose attacked Purvis when he took Allie. Seriously?

Anyway, this could have been a good time travel if it hadn’t been so silly in parts. I don’t think I’d be interested in this author again.

The only swearword that stood out was sonnavab*tch, and that was only because of the crazy way it was spelled.

There was not an ounce of desire, lust, nothing in this book. I think they kissed a couple of times so if you’re looking for a romance, keep looking.

As to the narration: Holy crap! Jim Denison is the worst I’ve ever listened to. I finally had to quit listening to him at 63% and finish it by just reading. He did nothing but read the book. No difference in the males and females voices whatsoever. One reviewer on audible said he was too monotone but he was a lot worse than monotone. He was horrible.

Would you listen to Rebel Traveler again? Why?

Yes, it's a page turner.

Dan Fields, a man after my own heart

Have you listened to any of Jim Denison’s other performances before? How does this one compare?

I preferred savoring it over several days.

If you’re looking for gratuitous sex and violence, this is not a book for you. But if you want a tale of slimy men getting their comeuppance and strong women saving themselves, check this out. Real-life people, unlikely circumstances, romance, action, history, culture shock, and a sprinkling of the occult meld as well in this story as meat and vegetables in a savory stew. And for dessert, the good guys win in the end.