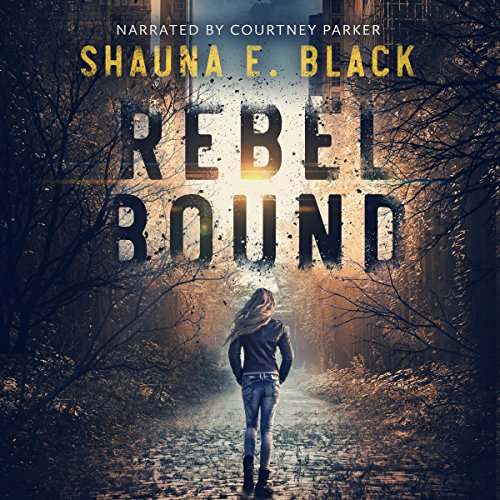 By: Shauna E. Black
Narrated by: Courtney Parker
Try for $0.00

Caelin is a survivor. It's been 11 years since a nuclear disaster drove much of the population underground. Caelin and her young sister Mardy were left topside, and Caelin uses salvage to trade for shelter until she gets stabbed, and a handsome stranger named Jate must save her life.

Jate brings the sisters to rebel turf where plans are being hatched to conquer the Undercity. The rebels preach good life for the masses, and both Caelin and Mardy are hooked on the dream. But as Caelin is drawn deeper into the rebel's inner circle, passion ignites between Caelin and Jate, and he suddenly seems determined to push her away.

Then she discovers the harsh price of loyalty. The rebel's dream becomes a nightmare that puts her sister on a dangerous mission to the Undercity. Caelin must determine who to trust before Mardy and the population of the Undercity are wiped out.

What listeners say about Rebel Bound

It's been a few weeks since I've read a good post apoc book that a) held my attention and b) that was fresh and unique, and thankfully Rebel Bound was both!

The characters were all well written and I pretty much liked them all. Caelin is responsible for looking after her younger sister, Mardy, since both their parents are dead, and so far she's doing a good job. In order for her to find shelter for them both during the day, Caelin has to scavenge as much as she can, the better the find, the longer she can stay. But pickings are getting slim and Caelin is struggling to find decent items. I really liked Caelin, she wanted to do what was best for her sister and I admired her tenacity and her bravery. I also liked that she took a while to trust others and trust the situation she was thrown into. It made her feel more real.

The plot was a little slow to fully get going, but once it did, it was awesome. I liked the premise and the author did a great job in explaining it and bringing the world to life. The romance was slow to build, which I also liked and I'm looking forward to seeing where it goes from here!!

In all, this was a good introduction to the world and the author and I can't wait to see what happens in the next book.

Courtney Parker was easy to listen to and had a clear voice. She had a few different tones and voices for the characters but some of them sounded too similar and I was a little confused at times as to which female character was talking!

Dystopian books is such an interesting genre because authors have a lot of option about how they can create their world. Yet at the same time most books have lots of similarities and reading a lot in this genre can start to feel repetitive. But this book is anything but... it comes across as new and interesting.

The character are fantastic, very well crafted from the good, to the self-serving, to the bad all of them are vivid and feel like they could walk off the page. Caelin makes a great lead character, she's complex and yet is motivated only by looking after her sister.

I don't want to give away the plot but I will say that over the book as new information comes to light it causes you to see actions and motivations in new lights and this makes for a very exciting story.

Great character voices for both genders and the delivery is smooth and lows well.

I loved it! Highly recommended.

I love these types of stories and this one did not disappoint. I was engaged and unable to put it down.

I LOVED this post apocolyptic book!A girl,who hs cared for her sister alone for many years,questions why a group would help them for 'free'.She finds out in the end.I hope there is a sequel!Courtney Parker was a good narrator.I was given this book by the narrator,author or publisher free for an honest review.

This story wasn't too bad. It was kinda wrote in the Twilight style, for youngsters.

Narration kept me listening. Courtney is a pretty good story teller. She has some post production audio techniques to master, such as de-essing, but that did not stop me from enjoying this story.

This is an awesome story! There are so many labels these days - dystopian, young adult, post-apocalyptic, etc etc etc. So, I guess story fits it all :) I think it's geared a bit more toward young adults, but I'm 50 (oops did I say that?) and I loved it! I felt right there with Caelin as she struggles through a new world, trying to keep her and her sister safe. I loved the writing and the narration, I think all in all it's an awesome story and I'd definitely recommend it.
I was given this free review copy audiobook at my request and have voluntarily left this review.

omg this audio is amazing

i love this so much i love they way the person read it. i couldnt put down my kindle at all
i love it so much
i so recommend it

Such a well-written read that hooks and entices you. A really good and enjoyable listen.

The narrator was good! A lovely listen.

For fans of the post-apocalyptic dystopian genre, this entry is a very good listen. I enjoyed both Ms. Black's writing and Ms. Parker's vocal style. The book was well executed and had a good complete story. She did a fine job of fleshing out the characters. The protagonist is a whiny and overreactive, but also smart and has it together.

Ms Parker did an excellent job of conveying the emotions of the book without overdoing it.

I assume from the ending that there will be a sequel, if so, I'm looking forward to it.

I received a free copy of this book and am submitting this review voluntarily.

I was delighted to discover that this series has a fresh take on the YA post apocalyptic genre.The author has a talent for world building and delivering well developed characters.The narrator has a pleasant voice and does a good job portraying the story.I purchased the e-book,but received an audiobook from the author for review.

This is a relationship story in ways as we have two sisters brilliantly written with this close relationship which helps to drive you deeper into the story itself. All the characters are really well done and there's plenty of chemistry within the book in that respect on character interaction.

The story and the premise is great. Caelin works really well as a lead character and her motivation of wanting to protect her sister doesn't detract from this or stop her developing as a character. We get plot reveals and twists and turns as we go through the book and it all feels well timed with great pace to the book. I like how this gives us more perspective or different perspectives as we go.

The narration is great and really matches the pace of the book and also works well with the story and all the characters in it.