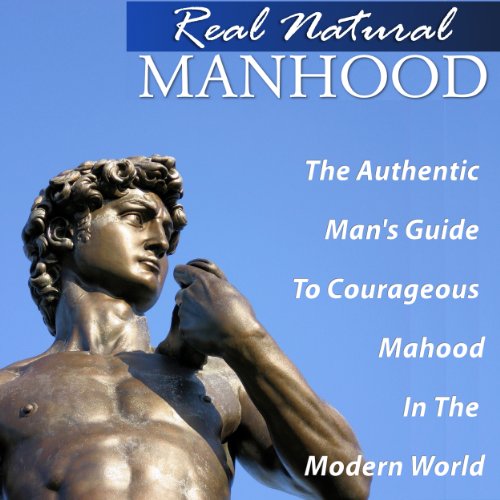 By: Vincent Vinturi
Narrated by: Robert Armin
Try for $0.00

What does it mean to be a real man today? And what is "manhood," anyway? Is it biological, cultural, spiritual...? Real Natural Manhood: The Authentic Man's Guide to Courageous Manhood in the Modern World explores the central issue at the core of any man's life - how to gracefully leave behind boyhood, immaturity and fear, and enter bravely into the boundless strength and infinite joys of manhood.

Men today are lost. We can all feel that something's missing. But we're not quite sure what it is... We scavenge the past for clues that may help us unravel the mystery of manhood. But for better or for worse, the stalwart man of the depression era belongs to the 20s. The stoic, hard-drinking post WWII gentleman of the 50s is also gone. So what about now? What about today? To come into your own as a man in the modern world is perhaps more difficult than ever before. Cultures all over the world have traditionally "forced" upon their boys rites of passage, which were designed to bring them face to face with their own mortality and usher them, if grittily, into manhood.

So what then is manhood? What is it that today's man is utterly lacking? In short, men today flow through their lives unaligned. Unaligned with their hearts, unaligned with a purpose, unaligned with the very universe they live in, itself. It's like they're lost at sea without any land on the horizon. Yet every now and then you meet a real man... What is it about this man that strikes you as so real, so natural, so compelling, so...manly? You can't quite put your finger on it. It's not that he's muscular. Or successful. And even if you sharply observe and meticulously catalog all of his qualities, the whole is somehow much greater than the sum of its parts. It's something elusive, ineffable... What is it? This is question you'll investigate in Real Natural Manhood.

This book is a an absolute waste of your time. I wished that I could get my money back. Thank God that men don't adhere to this type of philosophy or they would all be in the Bahamas weaving wicker baskets.

This book is spot on in my opinion. Awesome !!!

Really enjoyed thus book, Very enlightening to say the least. Very helpful for where i am in my life as far as a man perspective. It was also great to hear the narrator say, for listening to this book i have tremendous courage. Very appreciative for receiving this information.

This is one persons opinion of maturity and seeking enlightenment. Somewhat gender neutral. Not redundant which is appreciated. Unique theories.

Where does Real Natural Manhood rank among all the audiobooks you’ve listened to so far?

It's a pretty good book that offers some guidance and points to areas where the reader needs to spend time with himself to draw his own conclusions and work on his own areas free from any type of advice or programming outside of the self. It bridges a lot of teachings from Osho, Buddha, Eckhart Tolle, The Matrix and The Red Pill.

There is one piece of advice I think is very important in this book that every man should adhere to:DO what you you want. Ask yourself what you want, then do it immediately. Do not give it time to think, because thinking is what caused the problems in your life anyway. Your mind will only tell you what you should want or ought to want from conditional programming, but the spur of the moment doing what you want, is the real desire free from condition. Do that.

What insight do you think you’ll apply from Real Natural Manhood?

I'm putting myself first from now on and living selfishly. After a life of 31 years of bending to others needs, this book helped me realize the importance of the true male selfish nature. We must be selfish because to be selfless is actually self less, and without a centred self people do not respect you, because being self-less means your don't respect yourself and your wants and needs.Put yourself first, always.

Women only categorize men in two categories, lovers and providers. As men, we need to understand which role we want and be sure not to blur the lines between both because that confuses women and also prevents you from being a man of intention and action.