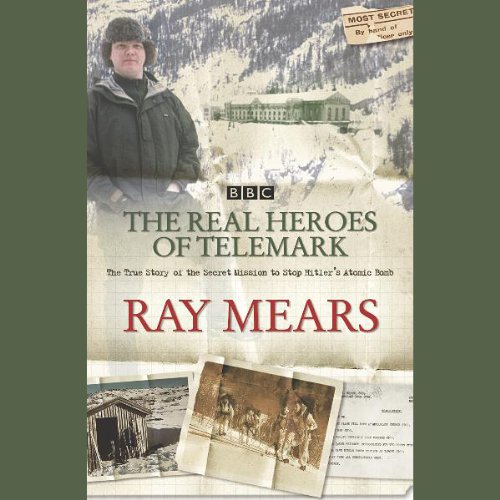 Sixty years ago, four men parachuted onto a Norwegian glacier, equipped with only the most basic equipment. Their mission was to prevent the Nazi regime from building an atomic bomb. Now wilderness expert Ray Mears tells the true story of this gruelling campaign, showing how these men's ability to survive in extreme conditions influenced the outcome of the Second World War.

The Telemark campaign was an example of the bravery and skill of the SOE trainees. The Norwegians transformed a military disaster into a triumph. This audiobook will tell the full story for the first time.

"If Ray Mears isn't a Great Living Englishman, then goodness me, who is? Ray is a persuader, poulariser and pragmatist in the Durrell-Attenborough-Bellamy tradition." (Robert Crampton, The Times)

What listeners say about Real Heroes of Telemark

loved it. Ray Mears is my favorite.

i just love what Ray mears does, and I always wanted to take one of his courses but could never afford it. please make more. no doubt I will buy them. thanks again.

A pity the only the abridged version is available

Excellent true sorry superbly told by Ray Mears, with passion and understanding in what these remarkable men went through without knowing at the time how significant a role they would play in the war. True Hero's

Amazing tale of courage everyone should listen to.

An amazing tale of courage beautifully writen and read by Ray. Please can we have more books like this Ray! The film is one of my favourites but as ever misses out large chunks of the real story. This is a thorough but easily digestible account of the heroic Norgies!

Excellent telling of a fantastic story

Excellent telling of a fantastic story, Ray does an excellent job of honouring the brave men of the telemark

such a good book and a very good read listened right till the end it was so fantastic.

A story of courage and resilience well told by Ray Meares. A key turning point of WW2