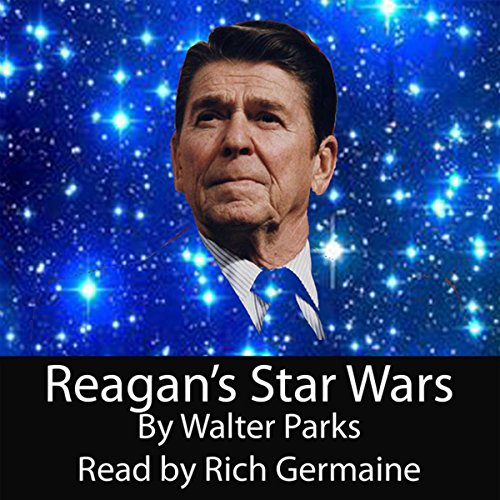 By: Walter Parks
Narrated by: Rich Germaine
Try for $0.00

President Eisenhower led us to victory in World War II. He then led our country as President for 8 years. He understood war and he understood how Washington worked.

The major message he gave us as he left the presidency was: Beware of the Military Industrial Complex.

His warning was very appropriate but it was not heeded by our nation. I know because I not only witnessed it being ignored, but I participated in using the power of the Military Industrial Complex during my aerospace career.

Reagan's Star Wars describes why and how the power of the Military Industrial Complex gave birth to the Strategic Defense Initiative known as Star Wars.

By the early 1980's it was becoming clear that the USSR would fail. The major US Aerospace companies who were dependent on military spending were growing concerned that peace would be declared and the military budgets would be significantly decreased.

They had to do something!

Most of the major US Aerospace Companies maintained a study staff to assess military needs and likely budget actions; and, of course to try to influence such actions and budgets.

I know the details of the Martin Marietta Aerospace Company's studies and the resulting pitches to the military, congress, NATO, and all affected agencies including the President because I was a corporate Vice President and well aware of our studies. I also had some awareness of such studies at Lockheed Aerospace Company because we had a close relationship with them. The two Companies eventually merged and is now Lockheed Martin Aerospace Company.

Their studies viewed the sharp drops in military budgets at the end of military threats like World War II, the Korean War and Vietnam. They feared that peace would break out and the budgets would be significantly decreased, maybe even as severe as happened after World War II. President Carter had already dropped the budget to the lowest it had been in over 25 years. The US military budgets would certainly be decreased. What could the Aerospace Giants do to continue our enriched lifestyles?

They reasoned that seeking funds for new weapons in a peace time or seeking funds to "patch" existing weapons would not result in the magnitude of budgets that they needed. They put a study together that showed the merits of pursuing a leap frog to the current weapons technology and jumping into technology of the future. They started preaching such a strategy to the US military, to Congress, to the President, NATO and any agency that would listen. The pitch got honed until it began to make sense. The Strategic Defense Initiative, later known as Star Wars, was about to be born. We honed our pitches first with the military staffs in the Pentagon, then the staffers of the key military committees in Congress. Then we were ready for the President.

I remember a key pitch to the President that I believe really convinced him in the merits of pursuing a leap frog to current technology. The pitch was about how we could use the workings of the brain of a tiny insect to control the battle field. President Reagan was sold. The military budgets ceased the Carter decline and began to rise. The military industrial complex was working; the military budgets were saved. >President Reagan absorbed and understood our "pitches" and proposed a new program: The Strategic Defense Initiative (SDI) on March 23, 1983. It was to replace the insane old strategic plan of Mutual Assured Destruction (MAD) that had been in place for many years.

The President's proposal was accepted by the military and Congress and SDI was set up in the Pentagon in 1984. The day after President Reagan's announcement the Washington Post published a quote from Democratic Senator Ted Kennedy describing the proposal as "reckless Star Wars schemes." The name stuck, Reagan's Star Wars was born.

What an interesting behind-the-scenes look at the Strategic Defense Initiative from a man actually involved and instrumental in the concept -- Walter Parks! It makes you wonder where the US would be now had Reagan not put the initiative in place? It not only saved the aerospace industry but also catapulted the US for what what we needed to fight terrorist attacks and other war related issues. So interesting!

Another fascinating Walter Parks' book. It's nice to own the Audible book to go along with the ebook.