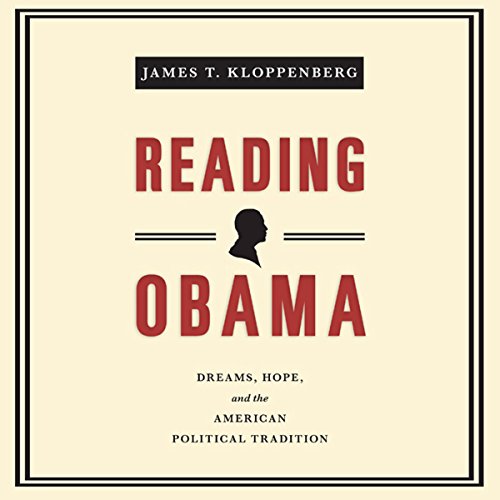 By: James Kloppenberg
Narrated by: Scott Woodside
Try for $0.00

Derided by the Right as dangerous and by the Left as spineless, Barack Obama puzzles observers. In Reading Obama, James T. Kloppenberg reveals the sources of Obama's ideas and explains why his principled aversion to absolutes does not fit contemporary partisan categories. Obama's commitments to deliberation and experimentation derive from sustained engagement with American democratic thought.

In a new preface, Kloppenberg explains why Obama has stuck with his commitment to compromise in the first three years of his presidency, despite the criticism it has provoked. Reading Obama traces the origins of his ideas and establishes him as the most penetrating political thinker elected to the presidency in the past century. Kloppenberg demonstrates the influences that have shaped Obama's distinctive worldview, including Nietzsche and Niebuhr, Ellison and Rawls, and recent theorists engaged in debates about feminism, critical race theory, and cultural norms. Examining Obama's views on the Constitution, slavery and the Civil War, the New Deal, and the civil rights movement, Kloppenberg shows Obama's sophisticated understanding of American history. Obama's interest in compromise, reasoned public debate, and the patient nurturing of civility is a sign of strength, not weakness, Kloppenberg argues. He locates its roots in Madison, Lincoln, and especially in the philosophical pragmatism of William James and John Dewey, which nourished generations of American progressives, Black and White, female and male, through much of the 20th century, albeit with mixed results.

Reading Obama reveals the sources of Obama's commitment to democratic deliberation: the books he has read, the visionaries who have inspired him, the social movements and personal struggles that have shaped his thinking. Kloppenberg shows that Obama's positions on social justice, religion, race, family, and America's role in the world do not stem from a desire to please everyone but from deeply rooted - although currently unfashionable - convictions about how a democracy must deal with difference and conflict.

What listeners say about Reading Obama

Americans who prefer their principles stated with dogmatic certainty rather than with the humility and tentativeness appropriate for democratic deliberation might find Obama's conception of politics unpalatable. In part for that reason, and in part because flavors his universalist aspirations with healthy doses of historicism and pragmatism still unfamiliar to large segments of the culture, many Americans have not noticed how firmly Obama is rooted in older national political traditions."
- James T. Kloppenberg, Reading Obama

Kloppenberg, a Harvard professor of intellectual history who focuses on the history of politcal ideas, uses Obama's writing (primarily his books Dreams from My Father: A Story of Race and Inheritance and The Audacity of Hope: Thoughts on Reclaiming the American Dream) to explore Obama as a writer, thinker, and a politician.

He firmly roots Obama in the intellectual pragmatic tradition of William James and John Dewey. He also shows how Obama's political thought and allowance for ambiguity owes debts to Reinhold Niebuhr and Abraham Lincoln and the fiction writing of such American writers as Ralph Ellison, James Baldwin, and Richard Wright, and Langston Hughes. Kloppenberg, however, isn't satisfied with just contextualizing Obama's books. He looks at speeches Obama has given, articles he has written, and even the texts of the HLR during the years Obama was at Harvard and edited the Law Review to show how writers and thinkers such as John Rawls, Martha Minow, Hilary Putnam, Richard Rorty, Charles Fried, etc. all influenced Obama's outlook and political world view.

While the book is certainly no hagiography, it is a very positive take on Obama's understanding of uncertainty and limits of compromise. The limit of this book, however, is a bit evident with the rise and election of Trump. While I myself consider Pragmatism, skepticism, openness, and the virtue of debate in a pluralistic society to all be positive contributors to a robust democracy, Obama's ideas (and I guess mine too) seem to have taken a huge step back with the election of Trump. Obama, however, understandably would probably take a longer and more optimist view of History and US politics (The arc of the moral universe is long, but it bends... yadda yadda"). I hope the optimism of this book and the long-term view of Obama's approach (all which seems to have taken a hit under the weight of 21st Century populism, and certainty) DO turn out to be just another piece of our Nation's political conversation and greater dialogue. I choke as I write that and read tonight's tweets from 45.

What could have made this a 4 or 5-star listening experience for you?
To be a more direct to the point. His sentences seem very abstract.

How would you have changed the story to make it more enjoyable?
Make a little more personal and use less references

How could the performance have been better?
Use less words. He tried to make too sophisticated.

If you could play editor, what scene or scenes would you have cut from Reading Obama?
Overall when he goes too deep into history to try to compare Obama's ideas to others.

Any additional comments?
I tried several times but I could not make myself listen to it. Yes listen! I can't imagine if I were actually reading it. I like Obama and all but the book is just flat out dry. No emotion, no engagement. It is like you are a very long math problem.

Good content. very informative but needed a lot of concentration to get the themes out