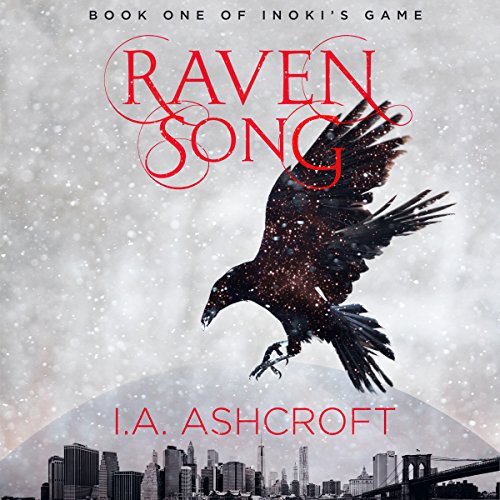 A century ago, the world burned. Even now, though rebuilt and defiant, civilization is still choking on the ashes.

Jackson, a smuggler, lives in the shadows, once a boy with no memory, no name, and no future. Ravens followed him, long-extinct birds only he could see, and nightmares flew in their wake. Once, Jackson thought himself to be one of the lucky few touched by magic, a candidate for the Order of Mages. He is a man now, and that dream has died. But, the ravens still follow. The nightmares still whisper in his ear.

Anna's life was under the sun, her future bright, her scientific work promising. She knew nothing of The Bombings, the poisoned world, or the occult. One day, she went to work, and the next, she awoke in a box over a hundred years in the future, screaming, fighting to breathe, and looking up into the eyes of a smuggler. Anna fears she's gone crazy, unable to fill the massive hole in her memories, and terrified of the strange abilities she now possesses.

The Coalition government has turned its watchful eyes towards them. The secret factions of the city move to collect them first. And, old gods stir in the darkness, shifting their pawns on the playing field.

If Anna and Jackson wish to stay free, they must learn what they are and why they exist.

Unfortunately, even if they do, it may be too late.

Raven Song is the first of a four-book adult-oriented dystopian fantasy series, a story of intrigue, love, violence, and the old spirits in the shadows who wait for us to notice them again. Readers of Neil Gaiman, Holly Black, and Charlie Human will enjoy this dark magic-laced tale rooted on the bones of what our world could become.

What listeners say about Raven Song: A Dystopian Fantasy

interesting mashup of dark fantasy and a dystopian

Raven Song by I.A. Ashcroft is the first novel in the series called Inoki’s Game. Jackson is a smuggler in a future world where the United States has been scorched by nuclear bombs. He has been a misfit all his life. Not only was he raised in a group home until adopted, he also has some type of mystical powers and he sees ravens that no one else sees and are supposedly extinct. On a smuggling mission for the government, Jackson finds Anna. Anna displays magical powers from the moment that he meets her. She wakes up with exuding radiation and with powers that she’s never had before. To hop it off, she is apparently displaced in time. Terrified, she must trust the people around her, rightly or wrongly, if she’s going to figure out what has happened to her. Together, Jackson and Anna fight to stay away from the clutches of the government and the magical consortium, the Order, to survive and live as normal lives as possible.

This story had a lot of potential and might still as the novels continue. The plot is an interesting mashup of dark fantasy and a dystopian world with a lot of different people and motivations interwoven. Ultimately, however, I felt that there were a lot of different parts of the plot that were introduced and continued to be hinted at, but none truly resolved. There is enough action in the story line to keep the attention of the reader as the characters were placed in bizarre and exciting situations and discovered little bits of information about the situations that they were in. I liked Jackson’s character quite a bit. He was practical, kind, and gritty. There was a lot of backstory provided about him, which really made him come alive.  But I found Anna’s insistence on sticking to her ignorance, however realistic, annoying. Her backstory was also intriguing and I like the way that it was revealed. However, none of the mysteries in the story are solved, leaving the end of the novel seeming like a pause between books. There were different organizations, the government and their special division and the Order, and characters that could have been more clear. I also really found some of the supporting characters compelling and wanted to know more about them.  Overall, I liked all the parts of the story, especially the crazy manic Tony, but the lack of resolution makes it hard for me to really love this novel.

The narration by Mikael Naramore was good. He was able to capture the voices of the characters well, especially the manic Tony. In general the characters were distinguishable and the voicing gave life to each of them. The production quality was good as well. I would recommend this novel to anyone who likes a dystopian fantasy series and characters who fight against the establishment.

An oddity with colorful characters.

I.A.Ashcroft intrigues with a post-apocalyptic setting and the nature of magic. Excellent story. Need more!

A stand out dystopian and I can't wait for more!

Full Disclosure: I received a copy of this book from an author assistant in exchange for an honest review.

My Thoughts: Post-apocalyptic dystopian novel with a twist I’ve never seen? Sign me the heck up. Listening to it as an audiobook during my audiobook obsession phase? This just keeps getting better! When you read a lot of dystopian books they start to have a similar sound and get to be a little bit boring. Then you come across a book like Raven Song and you smile while you read one of your favorite genres.

Raven Song had me with the description. I was definitely interested and most of the reviews I’d read were very positive, so there really wasn’t any hesitation about reading it. Part of me was still a little nervous since it’s a debut author book and you never know what you might get. I was anything but disappointed. Raven Song isn’t perfect, but I will definitely be buying the next book in the series when it comes out and I think I’ll be sticking with the audiobook version (the narrator was pretty darn awesome).

I felt true frustration with both main characters while reading Raven Song. They both had parts where they were just flat-out stupid. It was frustrating as a reader because if you have an ounce of common sense, you know it’s a bad decision. Yet both Anna and Jackson (the main characters) are supposed to be intelligent and they make some seriously stupid decisions. I couldn’t help but think of other books where the author needs the characters to make a specific decision in order to put them in a bigger situation with drama. As a reader, if it’s not done right you get annoyed with the lack of believability.

I loved the way the author fed you details in a way that keeps the reader in the dark with Jackson and Anna. I’m normally kind of a know-it-all, so at first I thought this way of story telling would get old fast. I was wrong. The story continues forward at a perfect pace because of this and it allows for more of a surprise element (which I absolutely LOVED).

Overall, I loved Raven Song! It wasn’t perfect, but it was so different from all of the other dystopian books I’ve read that it really didn’t matter to me. If you’re a fan of the dystopian/apocalypse genre, I would definitely recommend Raven Song.