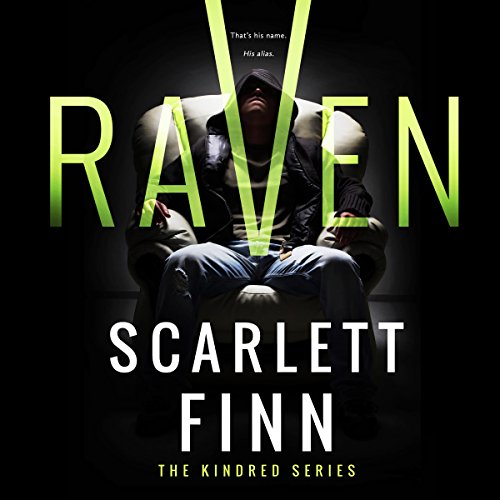 By: Scarlett Finn
Narrated by: Tieran Wilder
Try for $0.00

After a date ends in disaster, Zara Bandini is drawn into a conspiracy of dark lies and hidden motives. Bidding farewell to blissful ignorance, she must betray those who trust her to prevent evil from murdering innocent civilians.

Raven guides her, shields her, and seduces her. Now Zara has to protect her heart while saving the world.

What listeners say about Raven


WOW!!! I LOVED RAVEN AND WAS SURPRISED, IMPRESSED AND STAR STRUCK WITH MY FIRST SCARLETT FINN STORY! IT WAS SO MUCH BETTER THAN I ANTICIPATED!!!

May Contain Some Spoilers;
The publisher's summary doesn't give a lot of information. This audio has an intriguing steady paced plot with a cloak and dagger feel. There were a few intense moments, but the plot wasn't too dark. It's filled with suspense, danger, terrorist, a mysterious, and dangerous organization lead by a even more mysterious alpha who's almost like an anti-hero, but one you'll fall in love with. Zara gets sucked into their world when Raven mysteriously appears in her room one night wanting to earn her trust. She works for a company who's secretly developing technology that could be used to harm millions. At first she doesn't want to believe, but after conducting her own research she can't deny the facts. The main characters are great, and there are secondary characters that play significant roles, and you get to learn more about them. Things really heat up between Raven and Zara, as he starts earning her trust, and protecting her which leads to some hot, steamy erotic sex scenes. I was pulled in from the first chapter, but the more I listened, the more I became entranced with the characters, plot and romance.

The only reasons I didn't give this story five stars; 1) it's kinda long, and only told from Zara's POV, and due to just hearing her POV there were a few times throughout the story I was ready to get out of her head, and back into the action. 2) I really wanted to hear Raven's POV, and see things from his perspective. Not sure if any future stories will be told from dual POV's, but if they are, dual narration would be perfect...as long as it's the right male narrator.

Tieran Wilder did a great job with the narration. The male characters voices were good, but the lead female character could sound high pitch at times.

Months ago, I saw this audio offered through audioboom, but didn't request it due to the lack of reviews on amazon, and the length, but did keep it in my wishlist. When I requested and received the second book to listen and review, I knew I wanted to go back and listen to the first book before starting the second. I'm so glad I did, because Raven was a great book. It's worth a credit, but if your caution about starting the series, it's an awesome KU/whispersync deal! I have over 800 audios, and this one's in my favorite four/five star pile.

Tieran Wilder does a wonderful job portraying all the different characters and was absolutely wonderful at showcasing the edgy darkness of this story. I loved all the intrigue and shady dealing and the mystery of everything going on. Throughout the entire story I couldn't decide if I loved or hated Raven (still can't too). There were times that he was adorable and so sweet and other times where I wanted to smack the crap out of him. This entire story of layer upon layer of whats going to happen next or WTF??? just happened and it was so awesome!!

I really enjoyed listening to this book. The characters Raven and Zara are well done. Zara is a put-together professional who stumbles into some bad stuff and Raven is a dark and mysterious stranger that reluctantly comes to her rescue. The romance blooms fairly quickly, which makes you wonder about Zara’s good judgment, but never the less it works with the story. The romance scenes are pretty hot from the start and keep up the heat throughout the story. Also, the action kept me interested and anticipating what was going to happen next. The narration by, Tieran Wilder is great. She does an excellent job with voices and emotions. I highly recommend this audiobook!

I was given this audiobook for free in exchange for an honest review.

Super open ending to a promising first book. I instantly loved Raven. Zara's character was more difficult to connect with but Raven more than made up for it. The story line kept me involved and listening from start to finish and Tieran Wilder was an awesome choice for narrator. Awesome job!

I requested to listen to this book from the narrator, publisher or author in exchange for my review via Audiobook Boom.

Raven was the best character and he did a wonderful job. There were several scenes that were unbelievable. Her first encounter with murder, Raven, and the taxi ride. Overall the story was good. I just had to remember that it is a story but if I am kissing someone on a dark street and they get shot, I would not be so calm. But Raven was the "man". The narrator cracked me up sometimes when saying his part. This was another long story and must be listened to in intervals but well worth the listen, I got this book via audiobook boom. If you want to listen to betrayal, murder, mayhem, love, and humor then this is the book for you.

This is a good story full of suspense, mystery, great characters and a very interesting plot.

It was the first time I listened or read something written by Scarlett Finn and I had a great surprise.
The story is fast pace and Tieran Wilder did a great job. I have got involved in the story and I couldn't stop listening to it!

I voluntarily reviewed an audiobook provided via Audiobook Boom

Looking forward to the next book

Enjoyable, entertaining and engaging story. Well written and interesting storyline. It pulls you from the start and never lets go. Full of action, mystery, suspense, intrigue and steamy romance so how could you not enjoy it.

Zara is not prepared for the world she's about to pulled into or the mysterious man that invades her life. Raven the cold, dark, mysterious and questionable man that has secrets. All the characters were interesting, not just the main characters.

Definitely looking forward to the next installment of the series. Hopefully it will be available on Audible soon.

This is the first Scarlett Finn book I have read/listened to, but it won't be the last. I need to go back and read some of her other books.

I really, really liked this story!

I received a copy of the audio book free of charge in exchange for an honest review, and I loved it!! Hot guys, gutsy gals, and plenty of intrigue. This story was well thought out and well written. I plan on continuing the series, which says a lot..........lol! The narrator was great, too!

I completely enjoyed this story. Reader did a great job and the story was easy to follow. I hope to read more in this series.
This audiobook was provided by the author, narrator, or publisher at no cost in exchange for an unbiased review courtesy of AudiobookBoom dot com.

What made the experience of listening to Raven the most enjoyable?

I loved the characters and story!! Cannot wait to follow up with Swallow

Raven. He was dark, dangerous and a strong alpha

Have you listened to any of Tieran Wilder’s other performances before? How does this one compare?

Thanks for the gift of this book. I loved the story i hope Swallow comes out on audio soon