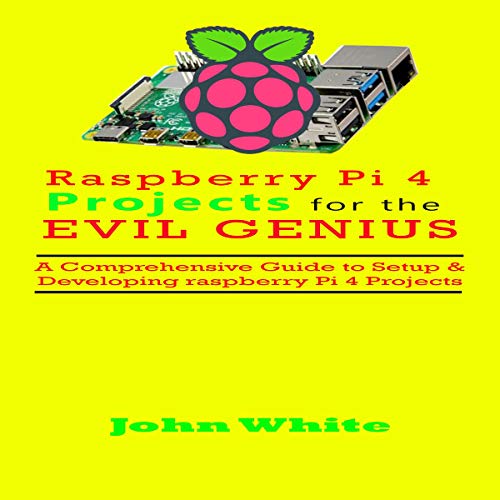 By: John White
Narrated by: Una McGruber
Try for $0.00

Raspberry Pi has long been the gold standard for inexpensive single-board computing, powering everything from robots to smart home devices to digital kiosks. The long-anticipated Raspberry Pi 4 takes Pi to another level. It offers performance that is good enough to use in a pinch as a desktop PC, plus the ability to output 4K video at 60 Hz or power dual monitors.

Raspberry Pi’s applications are wildly diverse. In addition to the many common purposes it was designed to fulfill, the minicomputer has evolved to also perform more unusual tasks. To implement a Raspberry Pi project, users, sometimes, require a lot of preliminary knowledge, and sometimes, barely any.

With enough interest in the project, however, a lack of knowledge shouldn’t be an obstacle at all. This guide contains amazing projects that will boost your productivity with the latest Raspberry Pi 4.

Here is a preview of the chapters in the book:

Scroll up and Click the "Buy Button" to add this book to your shelve.

I picked this up because I am VERY familiar with the Raspberry PI (I teach a class at the local community college) and I was interested in the offering and how it worked as an audio book.

Frankly I was disappointed, when giving commands the narrator isn't consistent, As part of a command the "-r" was referred to as "Dash R", "Negative R" and "minus R"

Additionally /etc was sometimes referred to as 'back-slash etc' and sometimes 'backslash etcetera' which can cause confusion for the reader. I think a written version would be better.

Also while all the projects are well documented and put together, I'm not sure any qualify as for an 'evil genius'

I was given this free review copy audiobook at my request and have voluntarily left this review.
The book presented several good ideas, like how to make an e-mail server and VPN which sounds neat but not something I would likely do, but the radio transmitter, game station, and Kodi video player all sounded really neat, easy, and something I would personally like to do. The information provided gives the individual enough to get started but suggest other resources for more in-depth information. There are examples of code, programs that work on Windows, Apple, and Linux, and real-world applications of the projects included in the book.
The narrator did a good job, she had a clear voice that was easy to follow, the only area in which I struggled was when she presented the code to be used, she would follow with the same code but spelled out "S U D O space A P T... ", it really didn't bother me overall, and I will likely remember it for a while but could turn some people away. It would be ideal if there was a PDF with the information stated, but then it wouldn't be an audiobook.
I currently don't have a Raspberry Pi, but have been interested in them for a while, This book made me want to stop and buy one now, just to try some ideas out. It does go through the process of what you need, how you can get it, and how essentially with a Raspberry Pi, it can be as cheap as $30, and as good as a modern computer.
Overall I enjoyed it, and when the Raspberry Pi 4's come in, I intend to relisten to the book.