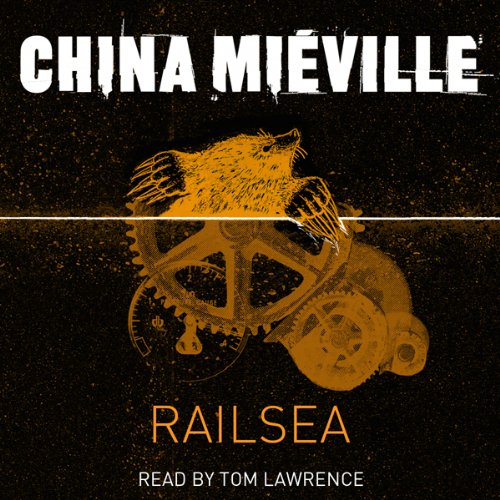 By: China Mieville
Narrated by: Tom Lawrence
Try for $0.00

On board the moletrain Medes, Sham Yes ap Soorap watches in awe as he witnesses his first moldywarpe hunt. The giant mole bursting from the earth, the harpoonists targeting their prey, the battle resulting in one’s death and the other’s glory are extraordinary. But no matter how spectacular it is, travelling the endless rails of the railsea, Sham can't shake the sense that there is more to life. Even if his philosophy-seeking captain can think only of the hunt for the ivory-coloured mole she’s been chasing – ever since it took her arm all those years ago.

When they come across a wrecked train, at first it's a welcome distraction. But the impossible salvage Sham finds in the derelict leads to considerably more than he'd bargained for. Soon he's hunted on all sides: by pirates, trainsfolk, monsters, and salvage - scrabblers.

And it might not be just Sham's life that's about to change. It could be the whole of the railsea.

“What kind of novel might someone produce if he had been influenced by writers such as Joan Aiken, the Awdrys, Daniel Defoe, Ursula Le Guin, Herman Melville, Robert Louis Stevenson and Spike Milligan? The answer is Railsea, a wildly inventive crossover/young adult fantasy with elements of SF and trains, lots of trains.” (Guardian)

”Huge fun, a book that plays intellectual games without ever letting them overpower the sense of rip-roaring adventure gradually unfolding.” (SFX)

What listeners say about Railsea

with beautiful words and imagery - sometimes hard to grasp is ultimately rewarding to listen to.

not the deepest story in China's grand arsenal however highly appropriate for a teenage audience and rewarding till the last drop.

a great book for both seasoned ready of Mieville or a young audience just getting into steampunk, high fantasy or books I'm general.

highly recommended for anyone who values imagination and originality

it took me a while to get my head round this endless sea of railways track . But once l had l found this book entertaining and the story gripped me and l must admit I was lost a Bit until l was deeper into the book. It's well worth the effort to get to understand this world .

A curious steampunk work that leaves as much unexplained as it elucidates. The narrator's voice shifts minutely in tone and accent, like the various rhythms of the rail-faring engines, creating a mesmerising pace to the story but occasionally making it tricky to distinguish between who of the characters is speaking. Overall, a compelling read.

Not up to his usual standards

Plenty of imagination as you might expect but I found I couldn't engage with the characters.
The setting, a 'sea' of rails was difficult to relate to: a clue that the story wasn't particularly engaging is that rather than pay full attention to the story, I found myself trying to work out how a rail-sea might actually work (it's never really explained in a satisfactory way).

Where does Railsea rank among all the audiobooks you’ve listened to so far?

A very memorable book, so among the best.

It's not so much the characters as the world they inhabit: the details are so intriguing that I was longing to hear more at every stage.

I liked the scenes where we were travelling along the Railsea, from the start and all the way through.

No way! I listened to it driving to and from work, but got so engrossed by the end I sat at home to listen to the ending.

This book would make an amazing film.

Another piece of quality

Working my way through China Mievele's works and wasn't sure about this one. I'm not a fantasy fan and it felt like a bit of a slow starter for the first few chapters but once the scene was set and world was painted, It became a beautiful story that I couldn't put down.

I've never read a story that has has described action in such a visceral way, making me feel like I could be riding along the rails right with them. And there are a couple of chapters where I felt genuinely awed, something which very rarely happens.

My only gripe would be on the odd occasion the pacing could be a little better. Some events, large and small, build up nicely, get me hooked, ramp up some more then as I'm expecting a satisfying conclusion, it will wrap up too quickly for me. It's almost like someone off stage is telling him to wrap it up and move on.

That aside, I thoroughly enjoyed the story and was never able to predict what would happen next.

This is how to do it. Another winner from China Mieville, another bizarre word made real by masterful storytelling. Top class narration too.

A different way of doing it

I loved the book. It takes a while to get into the rhythm and style of the book but it is really worth it.

There is so much world-building, yet I still have so many questions; there are so many (many) words, yet I am still none the wiser about characters, their motives. The book is trapped in blendness, no matter how much it tried to do the opposite, therefore became pretentious with too much of somethings and not much of other things ... reminded of Russell Brand, really.

China Mieville's second young-adult book takes us to a world covered by a sprawling network of traintracks, - the Railsea - and the crews of the trains who travel this land, some pirates, some navy, others hunters of the moldywarpes - enormous and vicious moles and scavaging technology. The main character, Sham Yes ap Soorap is the youngest member of the Medes, a mole-hunting train, her captain on a personal vendetta against the moldywarpe which took her arm. On one hunt, Sham finds an abandoned train along with a camera which gives evidence of the end of the Railsea - and leads him in a mission to discover just what is really out there. Railsea is another wonderful novel from Mieville's, showing his imagination and talent, making an excellent read, (in this case listen), for not just teenagers but adults too. On a different note the narrator is preferable, (in my opinion), to those who read Mieville's epic and amazing New Crobuzon books.