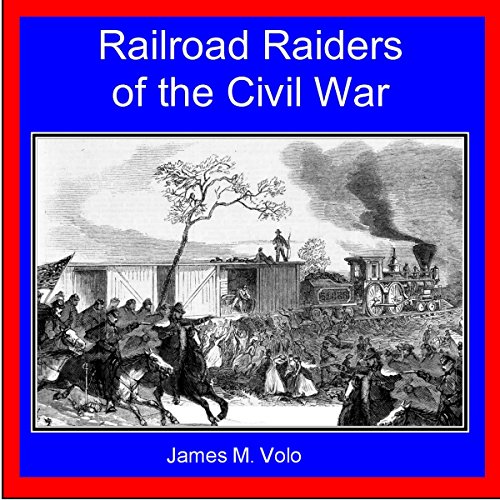 Railroad Raiders of the Civil War

By: James M. Volo
Narrated by: Joshua Bennington
Try for $0.00

About Railroad Raiders: The focus of this selection concerns both the Federal and Confederate efforts to disable or maintain the railroads within the active theaters of the war. Real railroads of iron and steam and ribbons of steel vanishing into the horizon quickly became a strategic objective of both armies in the Civil War. Raiders and protectors were deployed both North and South. The damage inflicted on roadways and rolling stock was not always easy to accomplish. The simplest method of slowing a train was to remove a small section of rail, but once spotted the gap was not difficult to repair. Both sides learned to tear up long sections of track, pile up and set fire to the ties, and heat and bend the iron. This was temporarily effective, but the rails could often be reheated, straightened out, and spiked back into place. The destruction of bridges, trestles, rolling stock, and especially engines was more difficult and expensive to undo. It was found that to permanently disable a locomotive, however, smashing cylinder heads, pumps, links, and valve stems was not enough. The parts had to be scattered, taken away, or buried or thrown into an inaccessible body of water. It is the author's purpose to record this often under-reported aspect of the Civil War for both military and railroading enthusiasts. Most Civil War historians concentrate on the strategic and military aspects of the railroading industry, and they rather uncritically mention engineering and other technical factors as if they were simply founded or well established. They were not. In many cases, the same sources and traditions are always quoted with no investigation into their accuracy, and no further understanding of the matter at hand is attempted. The Confederate Railroads, for instance, have only been given a detailed examination once. The Railroads of the Confederacy, by Robert Black (1952), was written 60 years ago.

What listeners say about Railroad Raiders of the Civil War

RAILROADS IN THE BOARDER STATES IN THE CIVIL WAR

Where does Railroad Raiders of the Civil War rank among all the audiobooks you’ve listened to so far?

I like books about the Civil War. This book had the twist of introducing the railroad and the battles over it during the war

What was one of the most memorable moments of Railroad Raiders of the Civil War?

Most of the battles to capture the railroad engines and their supplies. It was also interesting in how they moved the engines, with out tracks.

Joshua Bennington did an all right read. It was dry but then so is the book. I guess narrators can only do so much with the material. The one thing Joshua Bennington has going for him was his voice, I did like that.

I did not give this book top rating because it was like my history books, only so much you can do with that material. What I did like was the story line about trains in the South during the Civil War.

There are really no featured characters as the people mentioned are all written about in the third person and do not speak to the reader. I guess that is to be expected in a book dealing with the Civil War but I believe the writers style and not the topic kept me from rating the book higher.

The section on Gettysburg.

As a university senior, I spent hundreds of hours researching and then writing a paper on railroad reconstruction in Georgia . I was drawn to this book by the title. If you are a Civil War fan the book brings some new perspectives that are overlooked in most books dealing with the conflict. In some of the chapters, I felt as if I could actually hear and see a train in motion.

Railroads of the Civil War in Northern Virginia

If you like train stories and the Civil War stories this book is for you.

TRAINS OF THE CIVIL WAR

I liked the book but it reminded me of a text book, a little dry. I gave it 4 stars only becuse I liked trains.

Railroading During the Civil War

I like trains and stories about the Civil War. It was interesting that the author has mixed the two.

I did not give this book a high mark because it was more like a text book and lacked entertainment value.

RAILROADS AND THE CIVIL WAR

What did you love best about Railroad Raiders of the Civil War?

What I found least like able about the book was that it was mainly about the South's efforts to win the war. Not very even handed or neutral.

It was a good book if you were a Southerner and liked the railroad and what part it played in the war in the south.

A railroad history story in the Civil War time

The book was too much of a text book and needed some personal touches. Like what was going on behind the generals and captains minds. Why did they do what they did? What were they thinking?.

This book will only be of interest to railroad lovers and civil war nuts.