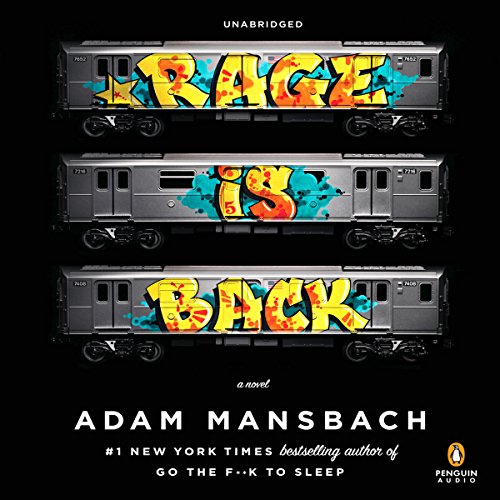 By: Adam Mansbach
Narrated by: Danny Hoch
Try for $0.00

Kilroy Dondi Vance is an 18-year-old mixed-race Brooklynite who deals pot and goes to prep school on scholarship, all while growing up in the shadow of his absentee father, Billy Rage, a legendary graffiti writer who disappeared from New York City in 1989 following a public feud with MTA police chief Anastacio Bracken.

Now it’s 2005. Bracken is running for mayor of New York City. And who should Dondi discover on a rooftop in Brooklyn but his father, newly returned to the city and ready to settle the score. The return of Rage and the mayoral race of Bracken prompt a reunion of every graffiti writer who mattered in the 1980s - in order to thwart Bracken with the greatest graffiti stunt New York City has ever seen.

Rage Is Back delivers a mind-bending journey through a subterranean world of epic heroes and villains. Moving through the city’s unseen communities, from the tunnel camps of the Mole People to the drug dens of Crown Heights, Rage Is Back is many things: a dramatic, hilarious thrill ride; a love letter to NYC that introduces the most powerful urban underdog narrator this side of The Brief Wondrous Life of Oscar Wao, and a literary tour de force from a writer on the brink of real stardom.

What listeners say about Rage Is Back

This is absolutely one of the best audiobooks I've ever heard. As a native New Yorker it read like a love letter that hurts to write. And Danny Hoch, as always, killed it!

This book is amazing and the narration is on point. I highly recommend this book!!!!

Enjoyed the book and narration thoroughly , especially the last few chapters. We need more graffiti fiction based books. Great to hear names like DONDI !!
Enjoyed it!

The voice actor narrating this largely stream-of-conscious book is out of this world. Entertaining, convincing, likable.

What other book might you compare Rage Is Back to and why?

Rule of the Bone by Russell Banks. Can't help but love the young men in both of these stories.

Which character – as performed by Danny Hoch – was your favorite?

The author has an intimidating command of the written and spoken word, and the words fly at the reader/listened fast and furious, a masterfully crafted tornado of Shakespeare, graffiti lingo, philosophy, drug references, urban lore, lush description of epic hallucinogenic trips, magic realism, and the verbal markers of class, race, power, authority, authenticity. . . . I was overwhelmed by the relentless passion of the language at times. There is never a let up.

The ending was a bit pat in some ways, but then other story arcs seemed to disappear completely.