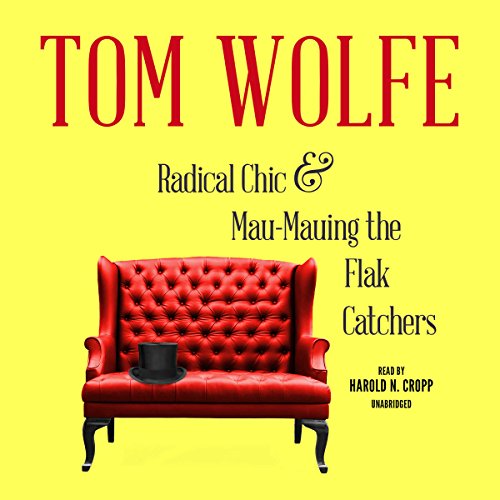 In "Radical Chic", Wolfe focuses primarily on one symbolic event: a gathering of the politically correct at Leonard Bernstein’s duplex apartment on Park Avenue to meet spokesmen of the Black Panther Party. He re-creates the incongruous scene - and its astonishing repercussions - with high fidelity.

What did you love best about Radical Chic and Mau-Mauing the Flak Catchers?

This brilliantly told piece of history is one that no doubt many power people hope you'll never find out about. Wolfe's writing is so rich with humor and insight, and the narration is so good, you'll think you're watching a play.

If you could sum up Radical Chic and Mau-Mauing the Flak Catchers in three words, what would they be?

My favorite character was the Flak Catcher.

Have you listened to any of Harold N. Cropp’s other performances before? How does this one compare?

That Lyndon B. Johnson created the victim grievance economy with its requisite Mau-Mauing and Flak Catching that we know and love today!

Although a satirical account of 1970s politics, the essays proved to be highly prescient and should enjoy a resurgence in light of recent fashionable identity politics movements.

I frightening insight into the future from 1970 I

This book could have foretold the future of black American radicalism of 2020. It gives an insight into the birth of the black radicalism movement and how community organizers like Barack Obama have forged the place in the cancerous growth of Black American culturism.

Classic Tom Wolfe -- at his best

I am delighted this title became available on Audible. The narrator does a fantastic job, capturing the nuances of Wolfe's prose and poetry. In today's PC culture, I wonder whether a capable journalist would dare tackle the subject matter, lest he get burned himself in the blowback. But Wolfe tackles it with great aplomb. I was a big Tom Wolfe reader as a kid in college and this book -- Wolfe's prose not the subject matter -- tickled my funny bone and scratched my itch for nostalgia in one fell swoop. I'm off next for the Audible of The Electric Kool-Aid Acid Test and The Kandy-Kolored Tangerine Flake Streamline Baby.

After Tom Wolfe's death, I wanted to try some of his most-recommended nonfiction, and found my way to this audiobook. I think it may be my absolute favorite of all the audiobooks I've ever listened to--a perfect combination of snappy prose and enthusiastic, pitch-perfect reading.

You get two totally indelible portraits of political life in the late 1960s, not in some didactic lesson but in the form of entertaining tableaux. I don't think I'll ever forget the party at Lenny's, or the "shit-eating grin" of the threatened bureaucrat. Four hours extremely well-spent, I've been recommending this one all over.

Historic New Journalism by Tom Wolfe Still As Relevant As Ever

The narration by Harold N. Cropp infuses the [already vivid] writing with attitude and power. I’d give him 10 stars if I could. This is a MUST listen for anyone interested in civil rights and racial issues in the USA.

Brilliantly insightful, hilariously detailed, and (unfortunately) still very much applicable. Written in 1970, and yet identifies social and racial dynamics still in place 50 years on.

Wouldn’t find a publisher today. Blacks (hustlers) are portrayed as trying to put something over on the good white people.

Breitbart sent me, he called this a must read
I agree. the insight into these minds and tactics is mind boggling.

Tom Wolfe's eye for left wing idiocy is legendary. This is a brilliant & timeless examination of the mess that is leftism