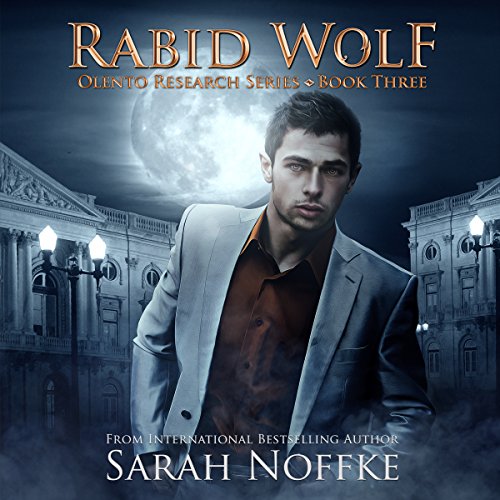 By: Sarah Noffke
Narrated by: Elizabeth Klett
Free with a 30-day trial

Rabid and hungry for vengeance, one wolf won't stop until he's put to death.

A string of murders involving women are making the residents of Los Angeles panic. They're calling the serial killer the "rabid wolf" because he tears his prey open by the throat and leaves behind a maimed body.

Meanwhile, at the Lucidite Institute, the pack is training, under Zephyr's instruction. He knows that soon they'll have to go after the rabid wolf and also rescue other members of the pack. However, they need to work together in order to be successful. They need to operate as one.

Adelaide, knowing that she needs to put an end to Olento Research's corrupted experiments, goes undercover working at its sister company, Parantaa Research. It's as a new employee that she meets Mika Lenna, putting herself in a deadly position. As long as she maintains her cover then she can gain covert information and find out how to destroy Olento Research and its CEO.

However, Mika is tired of the Lucidites beating him. These are his werewolves. He's the one who invested in creating them. And now the shareholders are pressuring him to deliver. That's why he decides it's time he sees the future, like the Lucidites. He needs to know where the next werewolf will be and when. And he needs a monster that can take them down.

The stakes are even higher in the third installment of the Olento Research series. The villains are more deadly. The heroes are growing stronger. But who will win? Beast, man, or wolf?

What listeners say about Rabid Wolf

Best in the series so far


RABID WOLF by Sarah Noffke Narrator: Elizabeth Klett 5* 2017/08/15
This 3rd audiobook in the enthralling Olento Research series is the best yet. It will have you on the edge of your seat and the hairs on the back of your neck standing to attention. Darker in nature than the other books, we get to see the workings of a warped mind, as the rabid wolf creates fear and anguish when he brutally murders women all across the city. The authors writing and the great narration makes you actually feel the terror of the women and the longing to kill that Hunter feels; it is both brutal and sad at the same time. This is a fast paced, exciting, anxiety filled story that still contains a great amount of humorous repartee. Tension mounts as we see Adelaide put herself in danger to try to find information, as Zephyr and the pack strive to capture Hunter before he kills again, the race to find the other wolves continues and all the while Mika and Drake are producing more creations. This story has great characters that grow from one book to the next and you can not help but love the easy, sarcastic back and forth between them. It's great to see the pack is becoming more cohesive, their talents growing and relationships forming. Mika is an excellent villain. He's crafty, intelligent but crazy as hell and the narrator shows this well. Then there is Drake, he totally lacks a conscience and reminds me of Josef Mengele. I not sure which of the bad guys is scarier. This is a great story that will keep you captivated from the first page to the last and leave you dying to get the next book

Loved the twist. Hunter is a complete mess and I especially love that answers to questions from another series were answered. Lol, no spoilers here. ;-) :-D YAY for a sweet kiss & opening of a broken heart. :-*

Zypher really came into himself. Caleb has an awesome gift. Poor Chris, she's so conflicted. Just as in the last book, I just adore Connor. <3 Honesty, he's my favorite character. =)

My star ratings include these 5 elements:
1★ story line
1★ engaging characters
1★ use of world building/descriptive
1★ being well edited or narrated
1★ the ending

Catching one of your own

1 step forward and two steps back
Adelaide struggles trying to stay ahead of Mika. Loving this series so far. Can't wait to see where the rest of this story goes.

The Lucidites are still hard at work tracking to shut down Mika, the big bad scientist that is altering humans for his own world domination quest. After stealing the Lucidites precious technology, Mika and his team are able to replicate dream travelers abilities, as well as other beastly creatures. And for the Lucidites, they desperately need to find a way to reverse the “were” gene for Zephyr and his pack, if they are ever allowed to leave the institute. Can Adelaide and her team of misfits stop Olento Research in time?

Adelaide is struggling with many facets of her life right now, and at the worst possible time ever! She was put in charge of this Level 5 case to find out where Olento Research was and to take them down, all the while still learning how to harness her abilities. Losing her father Ren before she was done with her training has definitely taken a toll on her. The confidence and drive this young girl has is outstanding! She never accepts defeat, never shows weakness, and therefore never shows love or compassion. But there is hope! Lucian, Adelaide's son, and Connor, (one of the were's) are wearing her down. Connor likes her, and she him. Although she tries to fight it, she finds herself opening up to him, sharing intimate moments with him...it's adorable! And Lucian, that little boy is a hoot! The two finally begin to enjoy each others company. Well Adelaide does, I think Lucian always did, lol. Adelaide had a hard time bonding with him from birth, but she has slowly allowed herself to open up to him and show love. The relationships in the story have been more captivating for me than the hunt for Mika and Drake...I love my love stories ;)

As far as the plot of the story, I'm finding myself thinking how hard it is to believe that they would leave Adelaide to run this mission. It seems to me like it has taken longer than missions normally do. I know she is new, and that is my point! Do they not have other, more seasoned Lucidites to help run this mission? And yeah I get Ren liked to run alone but there is no comparison! Adelaide needs experienced people with her, and not just Roxy, the FBI agent who is really getting on my nerves! The series has interesting characters with crucial rolls, but I'm hoping the story doesn't wrap up rushed. I don't need “good luck” closing this deal, I need skill and calculating moves to get this job done. Lets keep our fingers crossed for the conclusion of the story, lets root for that hat trick, hail Mary, or whatever you would like to call it, lol. Go Lucidites!

Elizabeth Klett graces us with her lovely performance on this crafty series. Elizabeth has this knack for accents. They are so good, and seamless. She moves from young woman English, (UK) to old dude German without skipping a beat! And her normal English (US) tone is so soothing just like a story tellers should be. I literally could listen to her all day! Thanks so much Elizabeth for the great memories! I give Elizabeth 5 stars!

**Audiobook provided by the author for an honest review**

bad to worse to better

things are getting really bad now. people are dying, there's werewolf protests, and Olento research has upped it's game. Adelaide goes under cover with no back up and Adin struggles to find a cure for the pack. there is violence and a wee bit of nudity. no major adult content. I would say ages 15-16+ . love the snarky humor in this series!

*I was provided with a free copy of this book by the author for review purposes. *

Book 3 of the Olento research series has left me needing more!
The werewolves have made the Lucidite institute their home and they are fitting in well with the rest of the dream travellers.
I love that we are learning more and more how the wolves came to be and what they are capable of.
I can not wait to find out how the pack and the lucidites will deal with the evil that is Olento!

Oh! Can't forget to mention that I absolutely adore how Adelaide's story is progressing!
I am so excited for more.
I am a Sarah Noffke addict!

As for narration, Elizabeth Klett is THE BOMB!
There is nothing else to be said :)

this series feels like werewolves for preteens
addy/Conner relationship is two broken people makes a whole. She pushes everyone away and his werewolf drive to find a mate makes him relentless made easier by the fact that she wants some to praise and accept her even with her bad attitude I wonder if it's also cause Conner and her father were both loners so it seems similar