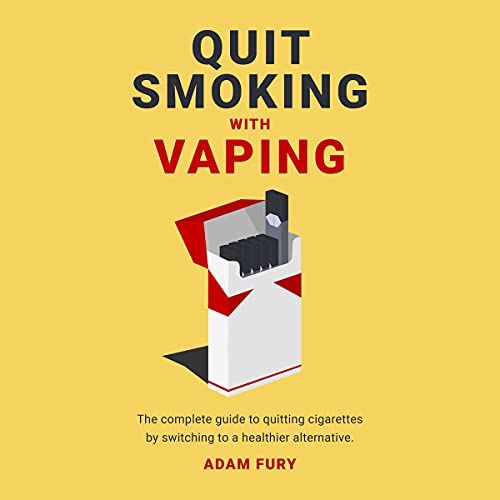 Vaping lets you keep your routine, without harmful toxins.

Vaping simulates the hit and feeling of a cigarette.

Most vapes start from just a few dollars.

No one has ever died from vaping e-liquid.

Doctors in the UK, AU, and NZ support the use of vaping as a cessation method.

Quit Smoking with Vaping is an easy-to-digest book about quitting cigarettes for good by switching to a healthier alternative like vaping. This book is based on scientific evidence and my own personal journey.

Being a smoker of 15 years, I struggled to successfully quit smoking using mainstream products like chewing gum, patches, and inhalers. That was until someone introduced me to vaping.

I was initially skeptical about vaping and didn’t understand much about it. But after just one month of vaping, I no longer wanted to smoke cigarettes. The urge was gone, and I haven’t touched one since.

After doing some research, I found out that vaping is 95 percent safer than smoking. This prompted me to create an online blog (wevapemods.com) to help educate other struggling smokers about vaping.

I’ve been writing vape articles for three years now, and as a result, I have helped countless smokers give up cigarettes. In saying that, I do come across quite a few smokers who are still reluctant to try out vaping.

Vaping can appear complicated and confusing on the surface. It can also be intimidating for some people. I’ll be the first to admit there’s a steep learning curve. That’s why I created this detailed guide.

After listening to this book, you should have all the information you need to successfully quit smoking with vaping.

What listeners say about Quit Smoking with Vaping