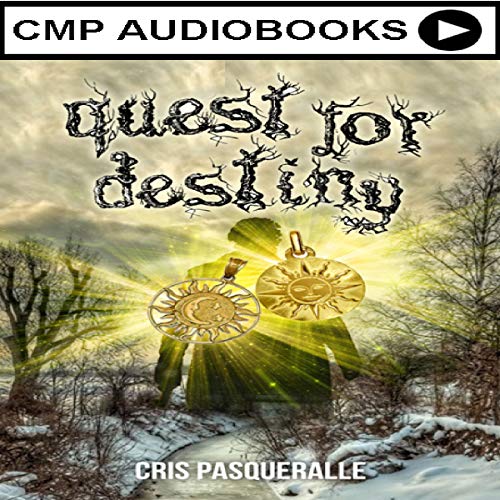 By: Cris Pasqueralle
Narrated by: Joseph Prince
Try for $0.00

Jack and Maddie have finally accepted their roles in the course of history that will change both theirs and the magical realms forever. Spurred on by the urging of their families, they have purged their fears and adopted the practice of heroship, embracing the future as something they can manipulate as easily as magic itself.

The ultimate reality stands before them: Tardon must be stopped! As it will not be an easy feat, Jack and Maddie must band together with friends and family to wage a fantastic magical war never seen or experienced before, as they stand at the precipices of both of their world colliding.

But as their powers continue to evolve and new evils emerge, with death looming around every corner, one final question remains: Will the twins accept their fate as heroes, or will they be converted to the darkness in their quest for destiny?

Quest for Destiny is a tale for the ages.

What listeners say about Quest for Destiny

much better than the first book

So, I saw there was a new narrator for this book so decided to give it a shot, even though I was pretty apathetic of the first one. I had missed book 2, but didn't really feel that lost on the story and was able to enjoy it. The narrator on this book is WORLDS better than book 1. There was also less "so and so said" type stuff in this one. It flowed a lot better and was a more immersive listen.

This is the third book I’ve read/listened to by this author. All have been in the Destiny Trilogy. I’d happily try another book by Cris Pasqueralle. I actually like the second and the third book in this series better than the first. I found the story came together nicely in the end and with a satisfying result.

This is the first book I’ve listened to by this narrator ( Joseph Prince ). He has separate voices (although not extremely distinct) for each character. Sometimes the sentences are run together and his cadence makes it obvious your listening to a book being read, but this does not really effect the understanding of the book and it is still an enjoyable listen.