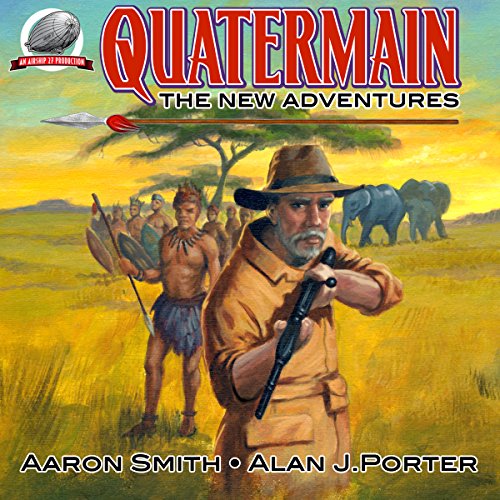 British adventure writer H. Rider Haggard's most popular fictional character was Alan Quatermain, the irascible African big game hunter. As the hero of the classic King Solomon's Mines, Quatermain immediately fired the imagination of listeners across the world and created an instant demand for more of his adventures. Now, Airship 27 Productions answers that on-going demand by presenting two brand new Alan Quatermain novellas each filled with a host of suspense, action and, exotic African locales.

When a French river boat pilot discovers elephant ivory suffused with gold, it sends the expert guide on a quest find a fable elephant's graveyard to learn answer to the Golden Ivory by Alan J. Porter.

Next, a naïve American lad follows Quatermain deep into the jungle to find eight missing white women only to uncover an ancient evil capable of possessing the bodies of its victim's in Aaron Smith's chilling Temple of Lost Souls.

Here are complete tales that will thrill pulp fans and introduce a whole new generation to one of the most famous adventure heroes of all time: H. Rider Haggard's Alan Quatermain.

What listeners say about Quatermain: The New Adventures, Book 1

This is my first Quartermain story ever. It certainly won't be my last. I'm happy that the author decided to make this a series and I can't wait to hear the rest! I've heard references to Quartermain in Indiana Jones but never really knew much about him. These authors have certainly got me interested in checking out some of his old classic tales. Both authored have a very different style to their stories. Both are an adventure but one goes sci-fi. I loved them both!
Jem Matzan, whom I had never listened to before, did a superb job with the narration. I'm hoping he will be doing the rest of this series. I'm pretty sure I'll be adding him among my favorite narrators.
If you enjoy Indiana Jones type of adventure stories you'll definitely like this book. Unfortunately I can't compare it to the classic Quartermain tales yet since I haven't experienced them. But I will!