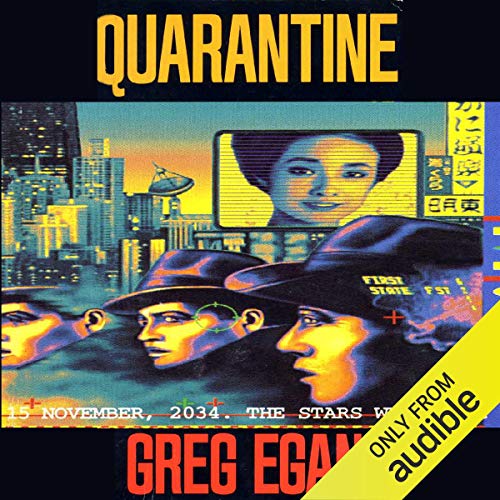 In 2034, the stars went out. An unknown agency surrounded the solar system with an impenetrable barrier, concealing the universe from humanity’s gaze.

In 2067, Nick Stavrianos is hired to investigate the disappearance of a mentally disabled woman, Laura Andrews, from the institution where she was being cared for. Aided by a skull full of neural modifications, he follows her trail to the Republic of New Hong Kong, where an organization known as the Ensemble has uncovered Laura’s extraordinary secret: An ability that could transform the world.

What listeners say about Quarantine

Fantastic Story Let Down by Narration

Where does Quarantine rank among all the audiobooks you’ve listened to so far?

The great ideas, like the priming, quantum mechanics, behavioral mods, and the quarantining of earth. The first part of the book, before it got into the quantum mechanics side of it, really reminded me of the Ghost in the Shell universe.

Would you be willing to try another one of Adam Epstein’s performances?

Yes, but only as I'm a Greg Egan fan, and no other option sadly.

I was able to "get used to it", but it was a conscious effort...

Not so much moving, but the lead character's discussing the behavior mods as a means of avoiding grief, and rationale behind it, on humans having always strived for behavioral modification, and a hardware mechanism of doing it being no less valid.

I've been a long term Greg Egan fan and was excited to see his books getting audiobook releases. However, the narrator they have chosen really is not very good, and it makes it a struggle to listen to. But if you can get past it, persevere, the story is worth it. If you still read written books though, I'd recommend just getting the written version. It is hard to pass up the convenience of audiobooks though...

What did you love best about Quarantine?

This story had a great concept, and the author did a great job of making a difficult subject comprehensible to the lay-person. I can't help but think this could explain some of the oddities in our world like the Mandela Effect.

The level of technical detail was refreshing. Guessing what technology will be available in three to six decades is always difficult, but some sci-fi authors are surprisingly good at predicting how technology will evolve.

Which character – as performed by Adam Epstein – was your favorite?

The sky is the limit; literally.

I gave up listening to the audio version after 10 minutes.The reader tried a poor hard boiled detective style. His patronising attempt at Chinese accent was woeful. I could not bear it. I read the paperback many years ago and will have to read this fascinating book again.

Stop sabotaging your books by pacing the narrators. The third wall is broken with every pause... every over enunciated... halting... word. I've forgotten the beginning of the sentence by the time narration reaches the end.

This book has a fascinating and unique premise that it utilizes to its fullest extent. The spy stuff near the end with the protagonists surreal superpower was thrilling and extremely cool. As with all of Egan's works this book explores themes of consciousness in a refreshingly logical way that is not often seen. Also typical of Egan's books the ending was a bit of a letdown, and I personally did not understand it at all.

The performance was pretty mediocre, but it was not bad enough to make me stop listening.

Overall, a fantastic read if you're a fan of hard sci fi.

What more could I want from a Greg Egan Tale

Cool tech, deep science, and mind blowing revelations. loved it, right up there with his best.
Narrator is a bit deadpan. But works well with the sort of cyberpunk noir theme.

I love Greg Egan books, but the guy who reads narrates Quarantine and Diaspora absolutely destroys the experience for me. I'm sorry Mr. Egan, you deserve better

Disappointed. The entire premise of the "bubble" was turned out to be a bait and switch after a promising opening. What the novel was presented as being about turned into hard sci-fi with a focus on quantum mechanics.

Now I like hard sci-fi so that wouldn't necessarily be a problem but the author seem to struggle with the presentation. A big part of the book consists of bland characters just having monologues/dialogues. These lengthy sessions seem to have little more purpose than to provide the listener with enough of an understanding of the mechanics that will make the ending plausible.

Egan not at his best

Quantum mechanics is not so pliable as simulated humanity - this ends up frustrating given Egan's level of detail and extrapolation.

Awful choice of narrator, had to shut it off

One of my favorite books, but the choice of narrator is unexplainable. The main character is Australian but the narrator is an American Sunbelt state burnt out dude-bro. So annoying and inappropriate I had to shut it off after 3 seconds.

What other book might you compare Quarantine to and why?

Think at all about the choice of narrator. Choose one that (1) fits the story and (2) whose voice isn't patently irritating and offputting

What character would you cut from Quarantine?

Whoever greenlighted this audio edition should be fired.

I love Greg Egan's books, but the narrator's repetitive intonation in every phrase is distracting and makes the book a slog to get through.

The story is classic Egan: extremely original, hard sci-fi intertwined with thought-provoking philosophical passages, all wrapped up in an entertaining thriller. Yet the listen was not a great experience. The reader insisted in punching every end of a sentence, and often even more frequently than that. Unnatural and exhausting. His ability to convey different characters was good, though.