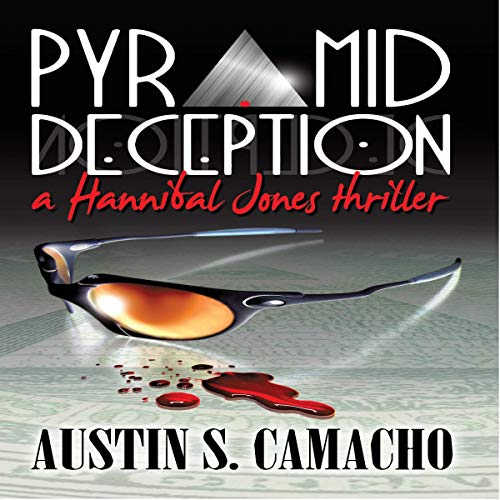 Private Eye Hannibal Jones takes on the most important client of his life: Cindy Santiago, the woman he loves. Cindy has been betrayed by a close friend and taken in a scam that has left her almost penniless. The swindler has not only taken her money, he has stolen her confidence and robbed her of her will to live.

Hannibal's only lead is Irene, the woman who got Cindy's friend involved and wants to run away with him. She may hold the key to Cindy's problem...until she is gunned down right in front of Hannibal in a drive-by shooting. When Irene's body disappears, Hannibal is the top suspect in a plot to help her and her boyfriend escape. Now, he needs to clear his name and recover Cindy's money.

As more murders follow, Hannibal must unravel the complex scheme before he and Cindy become the next victims.

What listeners say about Pyramid Deception

I was given this free review copy audiobook at my request and have voluntarily left this review. This felt like a true "law & Order" kind of episode. Every type of person and profession is involved, and Hannibal cant bare to see Cindy in such pain. He knows that the best way to help her is to come to the bottom of this case. No one likes a Ponzi scheme, except for the one who benefits. But when the one who benefits ends up dead, who is the one to blame? Great suspense and story. Lots of mystery, and some romance. The performance was great. A little too much cussing for my personal liking, but still a good story. If you have read any of Austin Camacho's other books I would recommend this one too. I'm not sure where in the Hannibal series this falls in but I have read a few of the them and its pretty cool to see the relationship between Hannibal and Cindy grow.

Held my interest from start to finish

"Pyramid Deception: A Hannibal Jones Thriller" (2015, 2020) by Austin S. Camacho is the seventh novel in a series about a Washington D.C. private detective. In this one, Jones follows the trail of deception that resulted in his lawyer girlfriend and her colleague being swindled out of their life savings. The story moves at a pace that held my interest as events shift from fraud to murder. Deep baritone narrator Royal Jaye voicing female characters made me cringe at times. Still, solidly recommended. At my request, I was given this free audiobook and have voluntarily left this review. Kelvin L. Reed Author of "Guilt by Association"

Don't miss this one!

action, relationship-issues, murder, suspense, private-investigators, law-enforcement, lawyers, fraud, friendship The first murder victim vanishes without a trace of body, trace evidence, auto, or police interest in the space of minutes. But not only this body has gone missing. There's all the money a scammer absconded with as well as a good friend, and more. And more bodies. And a professional killer. And arson. Excellent read! Narrator Royal Jaye seems perfect for this series as he can easily delineate the multitude of male characters with apparent ease. I won this audio in a giveaway! Yay me!

Private Eye Hannibal Jones takes on a case where his girlfriend Cindy Santiago has been unwittingly betrayed by a close friend and colleague and was swindled out of all of her money. As Hannibal works to recover Cindy’s stolen funds, he stumbles down a rabbit hole of red herrings, double-crosses, and murders. This was a mystery that kept you interested and guessing to the end. The narration was good as usual with this series. I was given this free review copy audio book at my request and have voluntarily left this review.

Pyramid Deception. . All I have to say is that this is superb entertainment Easy to listen to and a great story. It can be read as a stand alone novel, though the other books in the series are equally as good. I received a free copy of this audio book at my own request and voluntarily leave this honest review. .

A convoluted mystery thriller in which Hannibal Jomes, ex police detective and secret service agent, now private investigator, learns from girlfriend, Cindy, that she'd lost all of her money, over two million dollars, in an investment scam. Her good friend, Jason, had lost his savings, too - $75,000. Jones hopes to recover it, but instead Jason disappears and Irene, his girlfriend and source of the information about the get-rich-quick scheme is shot dead. The characters are well developed but this reader found the constant eating and bar time irritating, and also very much disliked the main protagonist's patronising attitude with constant referencing to 'his woman' offensive, like a bare knuckled fighter of half a century ago: all machismo and make pomposity. Narrator Royal Mays was a fine choice for narrator, his rich rounded tones eloquent in voicing each protagonist separately as well as breathing further life into the main.character, Jonss. His reading contains emotion, involved understanding of what he is reading, and was pleasant on the ear.. A nice performance. My thanks to the rights holder of Pyramid Deception, who, at my request freely gifted me with a complimentary copy via Audiobook Boom. It was enjoyable and well written, though it felt unlikely to have happened outside of book pages. There is a fair amount of fist fighting as well as shooting to keep action fans happy but not recommended for anyone annoyed by misogynistic attitudes.