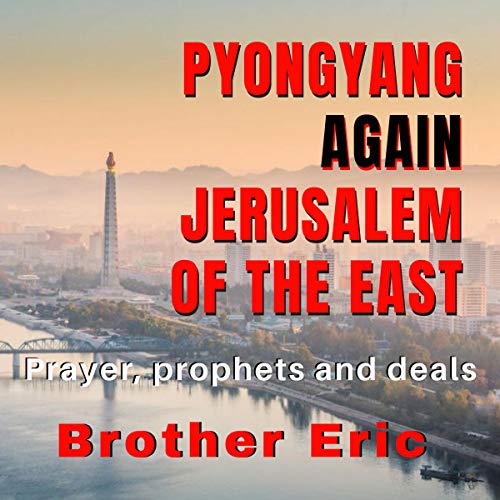 Pyongyang Again Jerusalem of the East

By: Brother Eric
Narrated by: Russell Newton
Try for $0.00

An inside view on the prayers and prophecies, the facts and fiction, the hope and hypocrisy in play behind the 2018 Korean peace talks.

"After sixty five years the people shall be too scattered to be one nation." - Isaiah 7:8

Can these words by the Bible prophet be applied to North and South Korea? The Peace Summit of 2018 marked 65 years since the armistice was signed. Does the example of ancient Israel imply that peace and development will precede unification? The book tells of the prophecies, the hidden secrets, Trump the deal-maker, and the future. Will the DPRK be freed from its gulag-status? It calls for a recalibration of vision, to pray for Pyongyang to again become the "Jerusalem of the East" - for the future destiny of Korea as a God-loving country.

What listeners say about Pyongyang Again Jerusalem of the East

Well researched piece on the current situation in the Hermit Kingdom. The book focuses on the religious aspects of what would happen if North Korea and South Korea achieved unification. It looks at the history of the country, important individuals and what could possibly happen in the future.

Interesting take on the Korean Unification

This book gives a religious take on the Korean Peace treaty and how it will affect the millions of Christians inside the country. The book introduces interesting information about the history of the 2 Koreas as well as prominent leaders responsible for the process.

Would recommend this to anyone interested in Korea, Trump's role in the meeting and what the future holds for the faithful in the country.

If you want to listen to how great Trump is and how he's going to save the world and religion, with some bible quotes, this is the book for you.