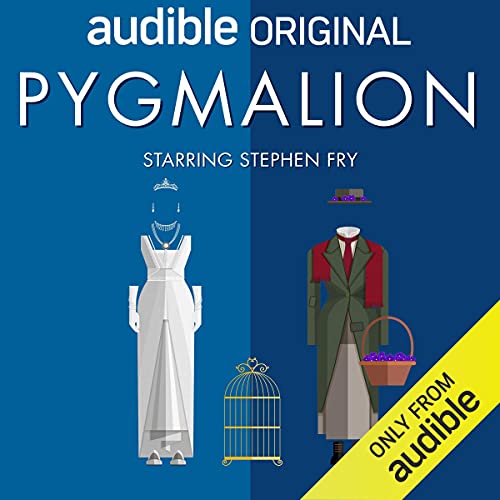 What listeners say about Pygmalion

A revamped narration of an old classic

Fantastic production and performance by all; Stephen Fry is a joy to listen to. I would list in the description narrators and parts they narrate. I hope Audible will continue producing these originals.

This is the best version of pig Mayleon that you were going to find an audible. Stephen Fry is brilliant as usual. I really liked all of the cast in this one. I hope there are more of these.

Listening to this again, and understanding where I have come from and where I was brought by education and transplantation, I understand that I am Eliza. I cannot go back. I cannot go forward. There is really no place for me. I feel for this character and I want to watch Mr. Shaw was trying to say in this amazing book. – – Dr. Hurst

I wouldn't change a thing about this performance. I thought everyone was perfectly suited to their roles and Stephen Fry was particularly excellent. I went through his reading of Sherlock Holmes and I couldn't get enough even after 30+hours, so I keep looking for more audiobooks with him as a reader. His persona for Higgins was thoroughly enjoyable. Love George Bernard Shaw.

good narration. the pace was too slow for me. the ending dragged on and on without any point

What can I say but.....it's STEPHEN FRY! One if the greatest narrators gives this new adaptation such life, humor and imagination, one will listen over and over again.

loved the new (to me) ending.

well done!
Prof Higgins was maddeningly superb of course.
Col. Pickering was courtly and suave and adorable.
Eliza was extremely believable and likeable.
I liked this production as well as My Fair Lady with Audrey Hepburn, and that movie is one of my favorites!

Not a Fan of Higgins

Higgin’s self absorption really bothered me because he didn’t treat anybody kindly or respectfully. I was really bothered by his mommy issues too. I think I may be so bothered because I had an ex that reminds me of Higgins! Eek!
In some ways, be an Eliza—want to make yourself better, and seize the opportunity. Know your worth, and what you deserve from life-don’t settle for anyone who treats you less. However, unlike Eliza, let go of those people who don’t treat you well-don’t fantasize about them…

Dud of a story

There's just no "there" there. The performance is fine but no production could save this lack of a story.