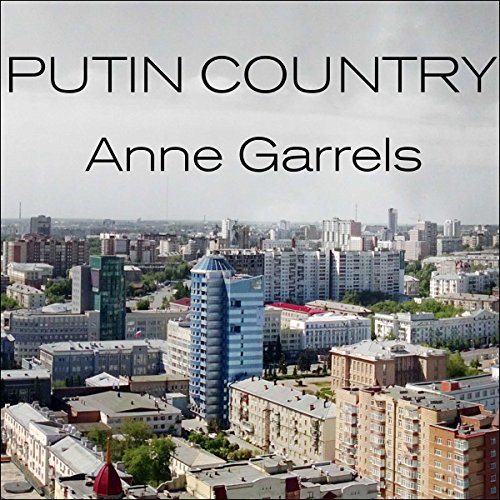 Long before the meteor strike, longtime NPR correspondent Anne Garrels had Chelyabinsk in her sights. More than 10 years ago, she began visiting the city in order to understand what life was really like in post-Soviet Russia, beyond the confines of the glitzy Moscow metropolis.

In Chelyabinsk, she discovered a populace for whom the new democratic freedoms were as traumatic as they were delightful. A closed nuclear city throughout the Cold War, Chelyabinsk was thrown into disarray in the early '90s as its formerly state-controlled factories were exposed to the free market. And the next 20 years would only bring more turmoil. The city became richer and more cosmopolitan, even as the forces of corruption and intolerance became more entrenched.

In Putin Country: A Journey into the Real Russia, Garrels crafts an intimate portrait of the nation's heartland. We meet ostentatious mafiosos, upwardly mobile professionals, impassioned activists, scheming taxi drivers with dark secrets, and beleaguered steel workers. We discover surprising subcultures, like the LGBT residents of Chelyablinsk who bravely endure an upsurge in homophobia fueled by Putin's rhetoric of Russian "moral superiority" yet still nurture a vibrant if clandestine community of their own. And we watch doctors and teachers try to do their best in a corrupt system. Through these encounters, Garrels reveals why Putin commands the support and loyalty of so many Russians, even those who decry the abuses of power they encounter from day to day. Her portrait of Russia's silent majority is essential listening at a time when Cold War tensions are resurgent.

"Former NPR reporter Anne Garrels...delivers a terrific narration of her own fascinating look at the current state of the former Soviet Union.... Whatever news she's delivering, it's mesmerizing." (AudioFile)

What listeners say about Putin Country

What did you love best about Putin Country?

I loved how it gave personal stories about how people are finding ways to survive in a deeply chaotic Russia as well as their history under the Soviet Union and how things have changed yet also remained the same.

What was one of the most memorable moments of Putin Country?

The story of the disabled children and the brave people building resources for them. That really hit home as I know that this is a real struggle even in America.

Which character – as performed by Anne Garrels – was your favorite?

I would say the women who's working toward building the disabled center for children.

I think the scenes involving the struggles of families with disabled children; how the government encouraged them to hand their children over to the States foster system. I was incredulous at that system and how it continues to fail these children and abuse them.

Overall, I really enjoyed this book. I'm a big fan of history and I think this book blended past events with the way things are now in Russia very well. It was a great view into a changed society and how the legacy of the Soviet Union continues to plague the vast territory of the new Russia, and how there's so much more to the situation than just the fall of the wall or glasnost. There's a deeper legacy and it will be interesting to see how things play out for this large country in the decades to come.

I was keen to get this book after I heard the author interviewed on NPR. I know little about Russia, and Garrels does an excellent job of explaining how the changes of the last 30 years (and the Soviet era before) have affected people's lives.
As a broadcast journalist, she does her own narration, which adds a lot to this first-person account.
Highly recommended for anyone who is curious about how and why Putin is so popular, and what Russians really think about their country's situation.

It's always interesting gaining a perspective into the lives of those different than us. Russians are certainly amongst those who have lived markedly different lives.

Anne Garrels spent years in the Russian city of Chelyabinsk getting to the heart of the "Real Russia." The results are fascinating but eventually feel a bit repetitive. More or less everyone we hear from has had the same experiences. Tales of corruption, shakedowns, and brutality abound.

Interesting - even if Russia's tourism board is bound to hate it.

This audiobook (read by the author) was very interesting and informative. I was captivated the whole way through, never bored. I loved hearing the stories of the Russians in this book and learning a bit about how they think, it's a great insight. I'm recommending this book to my friends & family.

Unfortunately, the book sorely lacks a strong coherent unifying thread. It's just a collection of vignettes. The Long Hangover had better writing and did a far better job at using vignettes on individuals to tell a compelling story. It's ok but I cannot recommend this book.

Excellent look inside Putins Russia. Well researched, beautifully told story of modern Russian heartlands. A must for anyone who wants to know why Russians support Putin.

Excellent. Garrels has spent many years in Russia and her depth and breadth of experience shine in this set of insights into modern Russia. The various chapters all tie together, but they read like extended articles or essays, offering a unique window into the daily realities of living in Russia. She spent her time in Chelyabinsk, a large city but not one of the premier cities, allowing Garrels to reveal more typical details of life for a great number of Russians. She does not cover some of the more well known scandals deeply, but rather concentrates on topics that do not get wide and thorough coverage. Highly recommended for those trying to gain a better understanding of this fallen and now seemingly re-risen world power.

This book benefits mostly from the writer/narrator being a seasoned radio journalist. Garrels has a wealth of great stories and insights about contemporary Russia, and delivers everything in an economical, highly listenable way.

There are probably better, more intensive books about contemporary Russia and all its peculiarities, but this is a great listen for anyone who wants a relatively quick and easy listen on the topic.

When interrupted, I hurried back!

I am filled with a mixture of emotions. Sorrow for the suffering of others, anger for the abuses in all their forms, compassion, and wonder. Thank you Anne Garrels for taking me with you to places I will never physically get to go. I'm grateful that I heard a recent radio interview, and chose to listen to your book!

Initially was annoyed the author decided to narrate. As it went along her voice was actually perfect for the subjective narrative. Would pass on this even though she obviously put it some real work.