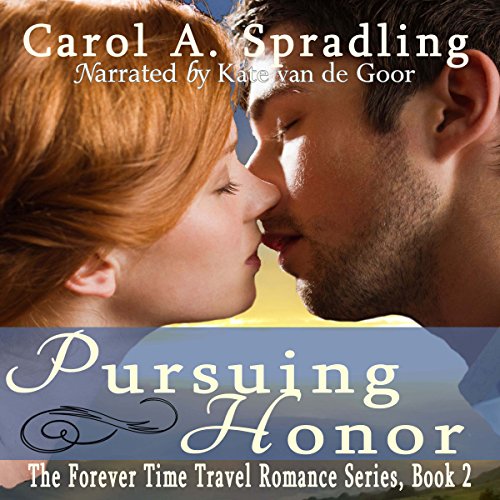 By: Carol A. Spradling
Narrated by: Kate van de Goor

Hunter Morgan is intelligent, handsome, and in love with Honor Moran. She has never given any indications that she would accept his marriage proposal, but medical school is over and Hunter needs to make his intentions known. All set to pop the question, he sees her nervously enter a dark alleyway known for ruthless activity. Hunter fears for her safety, and charges into the shadows after her. How could he know that his chivalrous act would launch him two hundred and fifty years into the past?

Honor had no idea it was possible to bring someone along with her when she traveled through time. She never wanted to hurt anyone during her stay in the future, especially Hunter. For two years, she has evaded his good looks and attention, but now, he lays unconscious at her feet, and has no way to return to his time.

Thrown back to a time as foreign to him as the means in which he got there, Hunter is determined to prove he is suited for anything as long as he has Honor's heart. Her growing feelings for him are threatened when her mysterious sister interrupts their chance for happiness. Honor will stop at nothing to prove her love for Hunter. And Hunter, he may have won the heart of the woman he loves, but is he willing to stay in a time that is not his own?

Better than a romance novel

Yes. A friend talked me into listening to this book because I normally don't listen to this genre but I was pleasantly surprised. It is a good story and the female character isn't a damsel in distress or the "strong woman" who goes weak when confronted by her superior male counterpart

No one in particular.

I'd probably rent the DVD

I thought the narrator was good. She started out a little fast but settled in by the 2nd chapter and her performance of the different characters was excellent

The narrator needs a little tweeking...

Would you try another book from Carol A. Spradling and/or Kate van de Goor?

Not from Kate van de Goor. While the story seemed pretty interesting, the narrator just read each sentence up and then down, up and then down. It was flat and just grated on me. I wish she would have actually read it before she recorded it. I'm sorry to write this because the story was really interesting, I just could not listen any more. I will say her tone was beautiful, it was the inflection and character play that was flawed. I'm sure she will improve.

Would you be willing to try another one of Kate van de Goor’s performances?

Do you think Pursuing Honor needs a follow-up book? Why or why not?

I cannot get past the up and down of the narration. So I think it would be unfair of me to comment.

She should listen to Katherine Kellgren or Ross Pendleton, maybe it would help.

Yes, it's descriptive and engaging. I was interested in the characters.

What does Kate van de Goor bring to the story that you wouldn’t experience if you just read the book?

She is easily able to go into character, in other words, I could recognize between the character's thoughts and the narrative. I also enjoyed her clear, consistent, and pleasant voice. It seems she has experience in acting. Her voice makes you focus on the story. Easy listening.

I rarely read one book in one sitting.