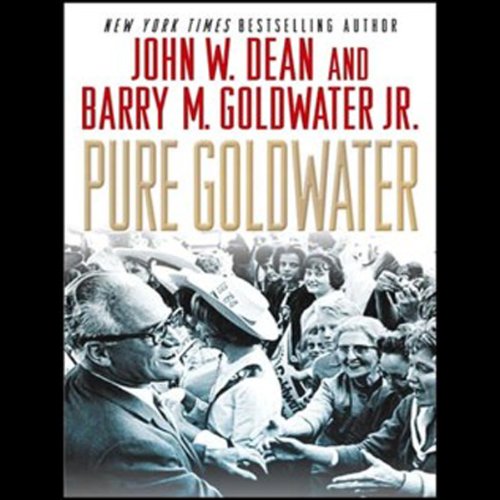 Barry Goldwater was a defining figure in American public life, a firebrand politician associated with an optimistic brand of conservatism. In an era in which American conservatism has lost its way, his legacy is more important than ever.

For over 50 years, in those moments when he was away from the political fray, Senator Goldwater kept a private journal, recording his reflections on a rich political and personal life. Here best-selling author John Dean combines analysis with Goldwater's own words.

With unprecedented access to his correspondence, interviews, and behind-the-scenes conversations, Dean sheds new light on this political figure. From the late senator's honest thoughts on Richard Nixon to his growing discomfort with the rise of the extreme right, Pure Goldwater offers a revelatory look at an American icon - and also reminds us of a more hopeful alternative to the dispiriting political landscape of today.

"An invaluable chronicle of the times." (Publishers Weekly)
"A sprawling treasure trove....Goldwater is worth rediscovering....Conservatives - and liberals, too - take note." (Washington Post Book World)

What listeners say about Pure Goldwater

I constantly read non-fiction and like Goldwater's story and personality. I listened to this for a little extra. Needless to say, the content is great, which is more product of the work but, the major downfall is the narrator. Mel Foster is so dry. I will never listen to another book of his. He makes this audiobook very boring. I ended up stopping the audio and just finished it at the library.

I've always been an admirer of Barry Goldwater and had I been old enough in 1964, probably would have voted for him. I was looking forward to this audio book considering the subject matter and the author, John Dean/Barry Goldwater Jr.; having greatly enjoyed "The Rehnquist" choice. That's what makes my disappointment all the more frustrating. It's not the substance of the book but rather its presentation. Goldwater's letters and ideas can certainly speak for themselves but how much better had they been set in more detailed context by some contemporary anecdotes and historical critiques. As is, the book is a rather long and tedious chronicle without enough scene setting to help it along. The Nixon/Watergate chapters are the most interesting but even here the drab format doesn't do them justice. Mel Foster's dry, flat and uninspired narration doesn't help matters.

Pure Goldwater lives up to its title

Two highlights of the book:
Goldwater's involvement with Nixon.
Goldwater's deep love of family and country.