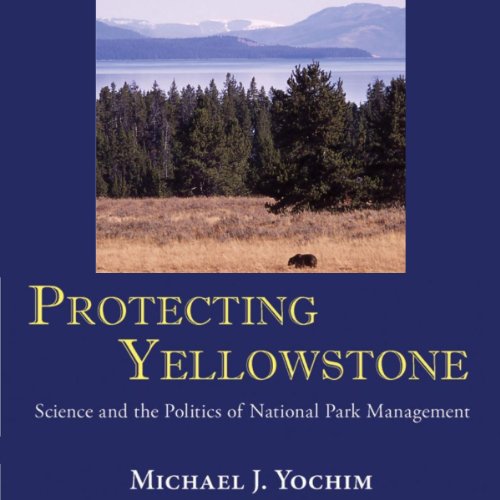 By: Michael J. Yochim
Narrated by: Jack Chekijian
Try for $0.00

Yellowstone National Park looks like a pristine western landscape populated by its wild inhabitants: bison, grizzly bears, and wolves. But the bison do not always range freely, snowmobile noise intrudes upon the park's profound winter silence, and some tourist villages are located in prime grizzly-bear habitat. Despite these problems, the National Park Service has succeeded in reintroducing wolves, allowing wildfires to play their natural role in park forests, and prohibiting a gold mine that would be present in other more typical western landscapes.

Each of these issues - bison, snowmobiles, grizzly bears, wolves, fires, and the New World Mine - was the center of a recent policy-making controversy involving federal politicians, robust debate with interested stakeholders, and discussions about the relevant science. Yet, the outcomes of the controversies varied considerably, depending on politics, science, how well park managers allied themselves with external interests, and public thinking about the effects of park proposals on their access and economies. Michael Yochim examines the primary influences upon contemporary national park policy making and considers how those influences shaped or constrained the final policy. In addition, Yochim considers how park managers may best work within the contemporary policy-making context to preserve national parks.

What listeners say about Protecting Yellowstone

How policies devised for Yellowstone

This presentation uses one of our National Parks and the specific issues noted in publisher's summary as a microcosm of controversies and policymaking issues within the NPS. This premise allows for a clear focus, rather than a muddle of multiplicity. As a government agency, policies are primarily part of a political agenda, and park superintendents have less influence in the decisionmaking process. Detailed studies into the specific controversies listed and the eventual outcomes are well presented in this piece, and reflect the US political climate.
Narrator Jack presents the material with the clear, well defined speech and tonality characteristic of the successful lecturer.
I received this book as a gift

I received this audio book in exchange for a honest and unbiased review. This book is about Yellowstone National Park. Here they talk about Yellowstone's history, present and future. What politics have to do with the park and effects politics has on it. They discuss the animals that live there and how laws have changed overtime to make this wonderland the wonder that it is now. There is so much information in this book that I found it to be truly educational!

The author, Michael J Yochim did a great job in his research about the park. He didn't leave a stone upturned or a buffalo left to roam. The information in this book is priceless and would be a great book to add to High Schools. The narrator, Jack Chekijian did a great job reading this book to us flawlessly and in such a way to keep us interested! Great job!