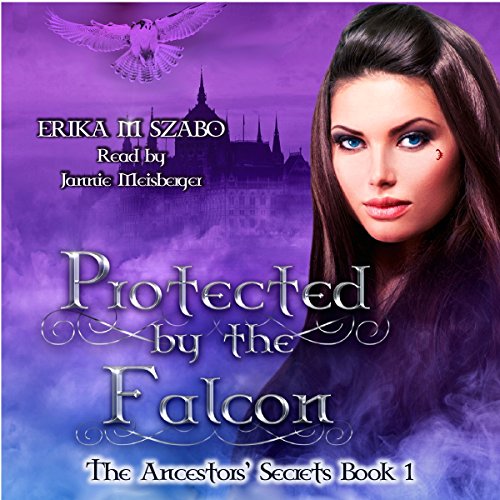 Protected by the Falcon

By: Erika M. Szabo
Narrated by: Jannie Meisberger
Try for $0.00

Ilona is a doctor and is ruled by logic. When she starts to develop unusual powers, her beliefs change and she's thrown into a world of mysteries, traditions, and secrets. She doesn't know much about her heritage, besides legends and rituals, when she begins to remember her mother's instructions concealed as rhymes. The discovery of her healing power and ability to freeze time is exciting and frightening. A sinister man appears and Ilona connects his presence with the series of mysterious deaths around her. She has been in love with her unsuspecting best friend, when she meets a stranger. She is drawn to him and confused by the sudden magnetic feeling.

The Ancestors' Secret series is an epic fantasy, heroic romance series with magical powers, ancient legends, a love triangle, and time travel that is a great listen for fantasy lovers and also suitable for young adults.

What listeners say about Protected by the Falcon

A book of hidden secrets and an epic quest

In the flower language of my ancestors, this is a book of hidden secrets.
‘Write your journal everyday…. Make sure you don’t ignore our customs’. Throw some time travel, superpowers, a love triangle and some epic romance into the mix and you have one hell of a story.
Add vivid instances where one sentence creates an entire vivid scene, the mastery of storytelling. The author is clearly an artist and architect in forming a structure with strong plot points, subplots, theme, character, foreshadowing, pinch points and building tension until the climax. I listened to it in two sittings.
This book delivers. Listen to it.
Review by Will Jelbert, Author of The Happiness Animal

I Read the original version of this book which I purchased as an eBook. Since then the book got a major reworking. New title, cover, professional editing, and finally this audio book edition which I received as a review copy.
I enjoyed the original story very much, but the extra professionalism brought to the current edition is much appreciated. Jannie Meisberger's narration is top notch. Her voice pleasant, the clear but definitely British accent is easy to understand, and she provides just the right amount of emphasis to the story without over reaching.
The story about a Hun woman with special inherited powers is compelling and believably told. It has several exotic layers as this young woman learns more about her family, her heritage, and herself. Well done!

Protected by the falcon

The author starts the chapters using the meaning of plants and flowers and a definition as the theme of the section.

An Entrancing Tale of the Ancients

This was my first audio book and I was glad it was Protected by the Falcon. Since I am passionate for the paranormal this tale had me from the jump. Ilona, a young Hun woman is left to solve mysterious riddles about who she is and why she has mystical powers. Her mother died leaving her with a legacy of Hun ancestral secrets. Every stranger that enters her life is there to help her with her quest. Ilona is a strong character who handles her newfound gifts well. I loved the fact that she could time travel and freeze time. She is in for a shock in the end with a message from her ancestors that will alter her future. An added bonus is the reader's voice that is very mesmerizing and made the story come alive. I can't help it feel this author knows much about ancient Hun legends and magic.
It is evident throughout the story.

I love when I find a new book that I FALL IN LOVE WITH! I LOVE IT EVEN MORE WHEN THERE IS A FOLLOW UP BOOK I'VE ALREADY GOT DOWNLOADED & CAN'T WAIT TO START!! THE NARRATOR JANNIE DOES AN AMAZING JOB & I AM SO HAPPY I FOUND THIS NEW SERIES!! I DON'T GIVE SPOILERS BUT I WILL SAY IT'S DEFINITELY WORTH A CREDIT!! I HAD A VERY HARD TIME TAKING BREAKS FROM THIS BOOK CAUSE I HAD TO KNOW WHAT WAS GOING ON!! WELL WHAT ARE YOU WAITING FOR??? GRAB YOURSELF A COPY.... YOU WON'T BE SORRY!! GREAT JOB ERIKA I CAN'T WAIT TO READ/LISTEN TO MORE OF YOUR BOOKS!!

Yes I would enjoyed it very much

Which character – as performed by Jannie Meisberger – was your favorite?

the reader's voice that is very mesmerizing and made the story come alive.

I loved the innocence of the story line.

What was one of the most memorable moments of Protected by the Falcon?

The history and heritage

Have you listened to any of Jannie Meisberger’s other performances before? How does this one compare?

It was hard to follow at times due to the narrator.

I enjoyed listening to this narrator, however, because she didn't use different tones, accents and etc to develop each character, it was difficult to distinguish when she was changing characters without having to concentrate on what she was saying. It was hard to follow the transition.

I would really enjoy following this story with either a new narrator or if the current one would develop the characters by different voices and such.

loved this book and the author. will definitely read more

Beautiful and expansive universe! Worth the listen

You could listen to this and over and over and be amazed all over again! Jannie's voice is perfect for this role and it fits the characters that Erika has developed and the story to a 'T'! Great job and very enjoyable!

This story has everything. Great writing, check. Great spoken word, check. Great story line and character development, check! I enjoyed the articulation and the details in the story. I don't want to give too much away but this universe is expansive and wide. Ilona is on a journey of discovery and its like jumping on a magic carpet and letting it take you away to another place and time. Sit back, relax, and listen to a great story unfold in front of your mind.

What does Jannie Meisberger bring to the story that you wouldn’t experience if you just read the book?

Jannie is so articulate and detail orientated. Precise and easy on the ears. She has a way of bringing out the best words in a book in only a way she can. I think Jannie's character elevates the book to another level and brings the listener on a wonderful ride with her. Well done!

I listened to this book in 2 days! I couldn't put it away. Most people will probably want to finish this once and listen to it again as it grabs you and pulls you into its spell. This magical world is worth the listen and now that fall is approaching it is the perfect time for 'Protected by the Falcon'.

this is a unique book, that is about the Huns. this book is contains time traveling so we jump from the current to the past. we met many different characters, from time travelers to healers. it starts with a story of a young woman who loses her mother, but was destined to become the town healer trained by her mother however her mother's untimely death many years before kept her from gaining the knowledge. we follow her as she slowly finds her way using her magical abilities to heal. the story leaves us with somewhat of a cliff hanger, I can't wait to listen to book two.

Absolutely loved this book setting out the characters in this myth and magic book I love the concept, can't wait to see where it goes in the second one

I think this is ideal reading for teenagers and young adults. I would have loved it when I was that age BUT I did enjoy it since this sort of book is right up my street. Yes, I would recommend it to friends interested in this type of book.

Ilona is a fascinating character and interesting that the author has written her as a doctor - a healer.

I like Jannie Meisberger's voice which brought the story to life and weaved the tale with consummate actorly art!

No - I was too busy waiting for the next chapter!

What disappointed you about Protected by the Falcon?

I found the whole book disappointing. The plot is disjointed and the characters not well developed. Some of those who seem important at the beginning vanish from the writer's storyline part way through and you don't see them again. Leaving a book with a "hanging ending" is also not a good plot device to those who want an ending and not just a fast way to sell the next book.

Would you ever listen to anything by Erika M. Szabo again?

No, for the reasons stated above. I'm not sure why the book got published at all.

Who might you have cast as narrator instead of Jannie Meisberger?

Just about anyone. I'm sorry but I don't like to listen to American narrators, especially those who can't narrate well. There is little or no attempt at accents or voices for the various characters and when there is it is only occasional. Her attempts to pronounce Elsa came across as Elsa, Ailsa or Alsa. I still don't know what the character is called.

Disappointment. I read a review on Amazon that praised the book and, looking for something a little different, decided to try it. Sadly, it was a trying experience.

I will be returning this book without delay.