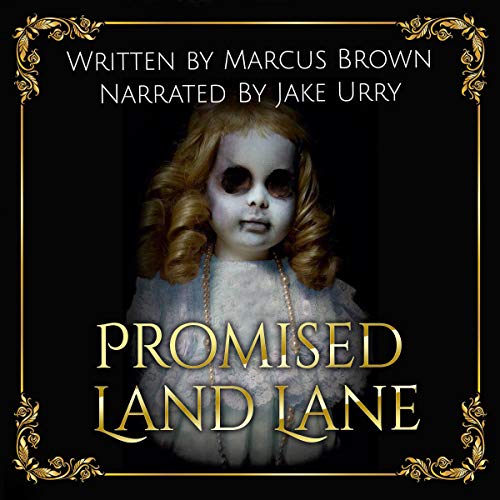 In 1901, Maisie Whitmore vanished without a trace. Her neighbour David Price was blamed for her disappearance and dealt with swiftly by the village elders.

A 100 years later, number six Promised Land Lane is steeped in mystery. Urban legend says the ghost of Maisie Whitmore stalks the grounds, taking revenge on anybody who crosses her path.

Sandra Miller is a prominent reporter assigned to investigate the murder of a 12-year-old boy. She has her own history with the house. Her sister vanished from there 20 years earlier.

Caught up in the mystery of the lane, she meets David, but something about him seems familiar.

What does he know about the murders?

And is Maisie Whitmore more than just an urban legend?

If you are a fan of horror and you haven't listened to a book narrated by Jake Urry yet, you're really screwing this up.

"Promised Land Lane" is a paranormal horror story with a classic feel and I thoroughly enjoyed every bit of it. The plot revolves around a series of happenings both past and present, an interweaving tale that is well done by Marcus Brown. I definitely prefer the moments that stick to horror and stay out of romance-land but there wasn't enough of that to lower my enjoyment of the book.

As I mentioned, Jake Urry is a powerhouse of a narrator. I've listened to countless books narrated by him and I am now completely unwilling to miss any of his work. I will recommend anything narrated by Jake Urry.

A little girl was brutally tortured and murdered, transforming her into an evil monster. Decades later, she takes revenge on anyone crossing her path at Promised Land Lane.

This was an unforgettable horror! It was dark and creepy and spine chilling. I absolutely loved how the story built up as well as how the scary parts came through. The author did a fantastic job creating the right atmosphere and details for the scenes. It was very well written.

Jake performed brilliantly. His voice was perfect for the horror story adding eeriness and spookiness to the character voices as well as the narrative. I thoroughly enjoyed his performance.

I highly recommend this book, and i look forward to hearing more from both the author and narrator!

Trigger warning: violence against kids in this book. This book was pretty good! It has a really creepy vibe. There is violence in book so I wouldnt recommend it for anyone who is t okay with that.

However, if you like creepy vibes with a sprinkling of death, this could be for you. It has some witchy parts and also so mystery. I finished it in 1 day. It was very creepy the way the narrator spoke for the Ghost/Demon child.

I got this book free to review. My opinion is still unbiased.

Scary and gory. This story will frighten and tug at your heart. Jake Urry brought each of the characters to life. Brilliant job.

Reminiscent of The Ring

Reminiscent of The Ring but I did really like it. The narrator is awesome. Creepy devil child, weird doll, a well and a reported haunted house where people go missing. All the classic ingredients for a good spooky story.

This book was very good.I had some issues with the plotline.How it twisted around that a sweet girl,is now a hungry monster that a caring man/ghost has to watch murder the people who look into her dolls eyes....yeah...they are ok to kill,but those who don't look into her eyes are not ok to kill,well he protects the monster.So that is the premise.When you get past that,it's a good story.Jake Urry is the ultimate narrator,anything he does sounds awesome! I was given this free review copy audiobook at my request and have voluntarily left this review.'

ok, this book is complicated to review. I liked most of it but i had problems with it too. The story begins out good. A little girl and the only caring adult around are murdered. Both are tied to the land where she lived (he was the neighbor). David (the neighbor) has chose to spend eternity protecting the innocent from Masie. Because in her death, she has become something evil and hungry.
The house takes on an urban legend like appeal. Kids dare each other to go up to it and such. Well, people disappear from this place ALL THE TIME. problem #1- and the cops are just now catching on? this house isn't under surveillance? the latest kid disappears and reporters get involved. Meet Sandra, a journalist. She's put on the story. but oh! her sister also vanished from #6 Promised land lane as well. After spending a lot of time around the house, Sandra finds herself falling for David. And here's where some of the problems i had with the story come in. i'm leaving out the details so i don't spoil anything. Although i didn't love this one or find it scary, i would read more by this author.
Jake Urry narrates this and i loved his voice! he did a great job.

i requested this audio book and have left this review voluntarily.

This book is creepy good. I highly recommend it to anyone who likes a book with an intense, scary plot. It is very well written and the story flows easily. It was hard for me to stop listening when I had to. I could have listened to this all at once if I had the time. The narration is also good and easy to listen to. I was voluntarily provided this review copy audiobook at no charge by the author, publisher and/or narrator.

This is a first-class horror novel that would make a great film. The author uses a couple of horror tropes in a unique and ingenious way.

An atmospheric tale that grabbed my attention

I absolutely adore paranormal tales - the type that keep you on your toes. This book is an eerie tale that interlinks the past to the present and kept me gripped throughout. The cover drew me to the book initially and didnt disappoint. The narrator was the perfect person to bring this book to the ears of the reader. His voice is just ideal for this genre . I was given this book by the author/narrator in return for an honest and unbiased review

All of this has been for you.

Jake Urry, who narrates, has a voice which could make his reading the telephone directory terrifying. And it was his reading alone which carried this reader through to the ending of this not so much horror as horrid story. Trite, drawn out and just plain unpleasant, this combination paranormal, gore and love story was not even scary, with the writing dependent on stirring the mire in the reader's psyche with constant character references to their shitting, or nearly shifting, their pants and the blackened teeth of anyone obnoxious (in addition, of course, to their bad smells and sniffing). Ah well. It seems from the other reviews that I am alone in my belief that fear comes from something far more subtle.
I doubt that I will bother with any other of the author's stories.
But the narration was, as anticipated, excellent.