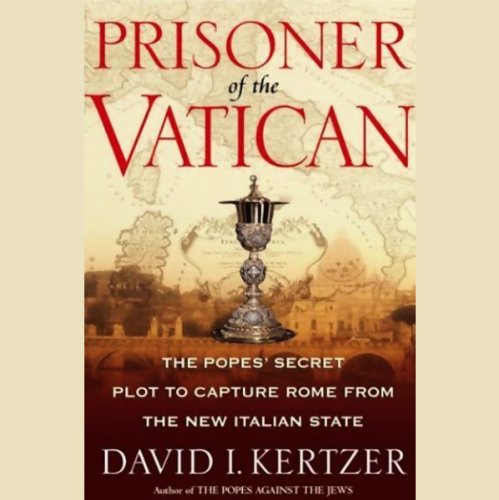 Prisoner of the Vatican

Based on a wealth of documents long buried in the Vatican archives, Prisoner of the Vatican tells the story of the Church's secret attempt to block the unification of Italy and seize control, not in ancient times, but in the late 19th century. For more than 50 years, the pope was a self-imposed prisoner within the Vatican walls, planning to flee Italy, to return only as the restored ruler of Rome and the Papal States. The scheme to dismantle the newborn Italian nation involved not only the cardinals and the Curia but also attempts to exploit the rivalries among France, Germany, Austria, Spain, and England.

Kertzer brings to light an untold drama played out among fascinating characters: Pope Pius IX, the most important pontiff in modern history; King Victor Emmanuel, working behind the backs of his own ministers; the dashing national hero Garibaldi; France's ill-starred Napoleon III, and many more. During this time, Italy was besieged from within and without, and Church history changed forever when the pope was declared infallible for the first time.

Prisoner of the Vatican looks deep into the workings of the Church in its final bid to regain the pope's temporal power. Kertzer sweeps readers along with riveting, revelatory panache. No one who reads his new book will ever think of Italy, or the Vatican, in quite the same way again.

"Populated with a colorful cast of authentic historical figures, this fascinating slice of papal and Italian history will intrigue and enlighten both scholars and the merely curious." (Booklist)
"Kertzer, given access to newly opened Vatican archives, tells a first-rate tale of the political intrigues and corrupt characters of a newly emerging nation, offers history writing at its best, and provides insight into a little-known chapter in religious and political history." (Publishers Weekly)

What listeners say about Prisoner of the Vatican

A Slice of Italian History

I enjoyed this book because it was not like reading a text book, it was interesting! Non-fiction can be tedious to read (dry) at times, so generally I take what I can from them and don’t worry about the parts my brain doesn't want to absorb – no matter how interesting it may be. In this case, I feel like I absorbed much more than I discarded.

I've been to Italy quite a few times, so I really enjoyed putting “Umberto” “Emmanuelle” “Cavour” “Garibaldi” “XX September” into context. I've seen the names and dates in a zillion piazzas and monuments and street names and metro stops, so it’s nice to learn a little more about them. We’ll see how much I retained next time I am in Italy! Will I think: “I know that name! but why?” or will I turn my husband and bore him with all the details I leaned?

I was dissapointed that the Lateran Treaty was just a blip in the epilogue, I think that ties in rather significantly with this slice of Italian history so I'm surprised the author didn't elaborate a bit more.

The book describes the history of Rome in the 19th century when the independent papal state of Rome was seized during the formation of the new Italian national state. The story is not about "The Popes' Secret Plot to Capture Rome from the New Italian State" as the publisher (or probably a semi-literate summer intern at the publishing house, who never read the book) thought to summarize this book, but more about the difficulties of the papal state and its souvereign, the pope, after Italian, national forces had seized it. The history is very well researched and explained, and the author holds a healthy distance towards its main characters and uses only original sources. I do recommend this book for people that are interested in catholic, papal, Italian or European history. Very well read.

History at its Worst

This is easily one of the most poorly researched "popular" works of history and certainly is a scholarly joke. We have Pius IX being ridiculed as "in his second childhood" and senile by others, none of them Catholics. The influence of the Pope during the second half of the 19th Century was modest at best. To assume that it played a major role is absurd for anyone knowledgeable about the Franco-Prussian War or the one fought between the new German state and the Austia-Hungarian Empire where Italy played a minor role at best. That Pius IX tried to meddle in various affairs is not doubted. But that he had any serious effect is absurd. And after a variety of negative comments about a hapless Pius IX, the author goes on to assert he was the most important Pope in modern history (a curious thought in an age which has seen the recent death of a far more important Pope.) The writer struggles to put Lombardy in the correct geographical position, one of several foolish errors, and discards all the accessible Italian and Papal histories of the period in the introduction. Even conflicting histories, if they be so, must be considered. Instead he views history through the eyes of French, German, Austrian and other historians. And no I'm not a Catholic but a philosphy student of Austine, Aquinas, Aristotle and many others. In fact at one point Aquinas is said to be more important as Peter's "descendant," as the foundation of the Catholic Church. Read the History of the Middle Ages or Charlemagne and you'll understand more about Italian history than this pathetic book. This would NOT be an acceptable thesis for a history student. The title is chosen to help it sell. "The Minor Role of the Papacy in the 19th Century" would be a better choice. And it is clearly not a history of modern Italy but someone's idea of making a buck or simply thinks that something anti-Catholic might sell well.

Not what I expected but allot of information. This was worth it. I had no idea of all of this that took place. Kinda makes me look at this subject with a new set of eye's.

It was v eryinteresrting with all the historical facts and dates that are presented. I think I'll read it or listen again.