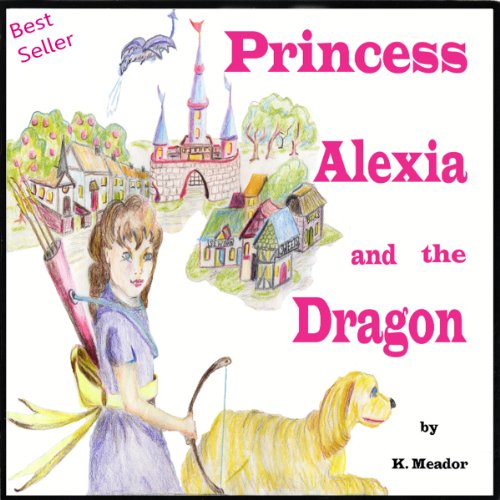 Princess Alexia and the Dragon

Follow Princess Alexia as she and her brave dog, Zoey, embark on a mission to confront a fire-breathing dragon. She hopes to do what her father's soldiers could not, capture the dragon so another Ample Apple Orchard celebration would not be attacked and the land set ablaze.

When Princess Alexia faces her adversary, she is frightened, but her fears abate once she and Titus, the dragon, begin talking. Can she convince Titus to stop plaguing her father's kingdom, and will the festival be celebrated without fear of destruction?

What listeners say about Princess Alexia and the Dragon

Where does Princess Alexia and the Dragon rank among all the audiobooks you’ve listened to so far?

This is such a great story. One of the best children's audiobooks I have listened to. It's a easy tale to get absorbed into.

I love this this book features a strong spunky female lead and the best sidekick ever, her dog.

What does Michaela James bring to the story that you wouldn’t experience if you just read the book?

You really feel like the action is happening all around you. Michaela James does an awesome job making it all seem real.

I saved this quote for my review because it was so sweet.


“Princess Alexia loved the outdoors. Each day she would go to the courtyard to practice shooting her bow and arrows at targets set up. To please her mother, she wore a dress of a different color each day around the castle. But, if it was up to her, she would wear pants like the boys did around town so she could climb trees easier.”

The plot feels so empowering for young girls as Princess Alexia goes on a noble journey to protect her people from a fire breathing dragon. This fairytale is one of acceptance and great compassion.

What was one of the most memorable moments of Princess Alexia and the Dragon?


The interaction between Princess Alexia and the dragon who speaks in pirate jargon.

Which character – as performed by Michaela James – was your favorite?

I also recommend the Spanish version of this title, which I thoroughly enjoyed.

My Grandson - 3 years old - can't get enough of this book. He loves the dragon who sounds like a pirate. As with K Meador's other children's book, the message is great and the illustrations beautiful.

So very cute with a great lesson too.

What did you love best about Princess Alexia and the Dragon?

I love the imagination of this book. I love the lesson that happens within it also.

I can't wait for my granddaughter to get old enough so I can read this to her.

What made the experience of listening to Princess Alexia and the Dragon the most enjoyable?

What was one of the most memorable moments of Princess Alexia and the Dragon?

Zoey, the dog, and Titus, the dragon, playful interaction towards the end

She did the pirate talk perfectly and add in her British accent and this story comes alive and stirs the imagination.

The obvious love the grandfather and granddaughter shared.

I liked the underlying message about sharing. It's a great way to teach kids without a lecture.

Princess Alexia and the Dragon

I like this book because it is really interesting,fun, amazing, and funny. I would recommend this to mom's or teacher's that teach younger readers and younger people who are learning to read and share.

What a darling story!

I loved the narration on this audio book! The story was fun, adventurous, and with a moral lesson. Loved the pirate talk!