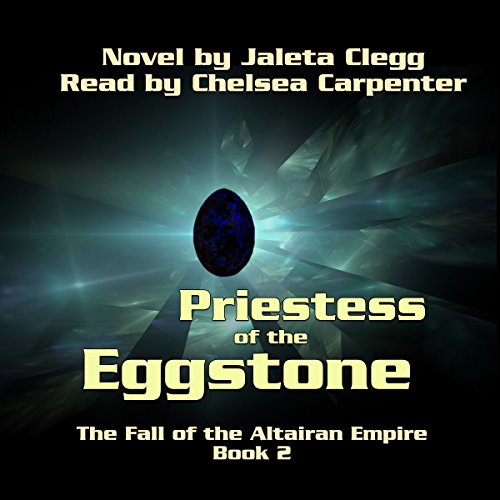 By: Jaleta Clegg
Narrated by: Chelsea Carpenter
Free with a 30-day trial

Pursued by the Targon Crime Syndicate bent on revenge, the Patrol intent on recruitment, and the Sessimoniss who want their god back, the last thing Captain Dace needs is a handsome copilot with romance on his mind.

It isn't Dace's fault she leaves chaos everywhere she goes. She didn't know Belliff, the company who hired her to courier sensitive materials, is a front for the Targon Crime Syndicate. Now Targon is after her for stealing their shipment of smuggled goods. The Patrol is chasing her for piracy, smuggling, and disruption of trade on a dozen different planets. But that's nothing. Her copilot, Jerimon, has an entire sentient species chasing him for stealing their god, the Eggstone.

The two of them set off on a desperate chase to get the Eggstone back to avert war with the Sessimoniss while evading the Patrol and the Targon Syndicate. But the Eggstone isn't just any rock. The Patrol isn't chasing her for the reasons she thinks. And Targon's days are numbered.

What listeners say about Priestess of the Eggstone

Space Opera at its best!

At long last, we have the second book of the Altairan Empire in audio. And it was worth the wait!
In book one, we got to see Dace disrupt everything on one out of the way planet. This time, she's causing chaos on multiple planets and spaceports. But really it's not her fault. Even Commander Lowell will tell you, she just has a nack for it.
Dace just wants to fly, and be her own person. But, when her crew sabotaged her ship in the first book, she's now penniless and out of options. So, she signed on to a slightly sketchy company to pilot a courier ship. Only to find out she's secretly smuggling for them. And that's just the start of her problems. The co-pilot she hired is running from an an entire alien race, having stolen a sacred artifact. Even Dace hasn't managed to upset an entire species. But Dace being Dace, well, can it be long before she does?
I've loved all the books of this series, and am thrilled that there are more in audio. Give them a chance. Jaleta has created something amazing with her Fall of the Altairan Empire series. You'll love them too.