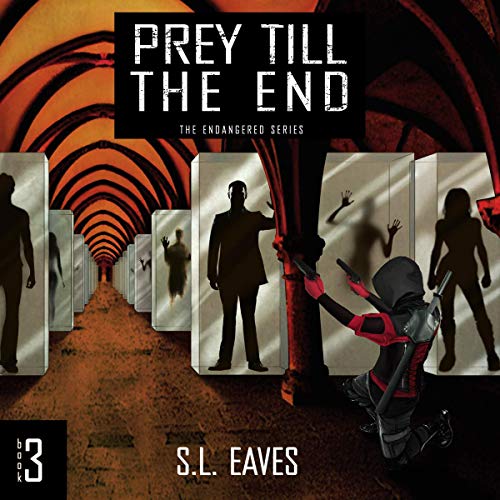 Prey till the End

The third installment brings the The Endangered Series to a gripping conclusion that will keep you on the edge of your seat till the last page.

Seven years have passed since Lori exiled herself from her clan. Seven years without bloodshed, without demons, without torture, without premonitions. Seven years of peace and quiet in the civilian life she's cultivated for herself.

Then Vega appears at her doorstep with alarming news: a former member of his clan is responsible for the recent string of homicides across the southwest and the Purebloods are holding her clan responsible. To make matters worse, this traitor is working with an enemy from Lori's past who is hell bent on revenge.

Now she's faced with returning to the world she's tried so hard to escape in order to save the only family she has left. Lori finds unlikely allies in a slayer and a werewolf hybrid, both survivors of S&D Pharma's experiments. Together they fight to stop the vampire's killing spree and absolve her clan from the Pureblood's wrath. That's if a ghost from her past doesn't succeed in stopping her first.

What listeners say about Prey till the End

So this wraps up the story wonderfully!! S.L.Eaves does a fabulous job creating such a masterpiece!! I will relisten to this! And I'm pretty sure I will update my reviews after each relisten! When I find stories that I love so much I come back to again and again I find something new each time!! I couldn't stop with this story. I binged on all 3 books and it all flowed together so I'm finding it hard not to clump my review up with all of them! Its worth a credit!! Holly Holt is a classic favorite of mine when it comes to narration and I couldn't see anyone doing half as good of a job as she did with this series!!

The Endangered Series is pretty great on its own, and doesn’t really need much talking up. What I do want to talk about is this narrator. Holly Holt has very quickly become one of my preferred narrators. She is a rising star and I see great things coming from her.

Lori has been on hiatus from her chaotic life for the past seven years. She’s made a normal mundane existence for herself in Los Angeles, hanging with the humans. She’s done quite well for herself; a nice apartment owns a blood bank and works part-time at a bar. All this normalcy is about to change. A ghost from the past will make an appearance that will complicate her life enormously. At the same time, the Purebloods are upset with the rash of recent human deaths linked to vampires. Notoriety is not high on their bucket list and they take a fatal view of vampires that break the rules. Our old friends at the DIA (Defensive instead of Central), another shady government agency, are getting itchy too. Lori’s old clan back at the English castle is in trouble and she is asked to help. How the issues are related is beyond Lori, but it can’t be a coincidence. Lori is forcibly pulled back into the life she tried so hard to retire from. This third volume is the best of the series; more action, clear goals and a tighter plot line. Four.point.five. I was given this free review copy audiobook at my request and have voluntarily left this review.

Take a little bit of Twilight, a Little bit of Underworld and you will have this series. Tho not my usually style this young adult book has well developed characters and story line. It kept me reading the entire series. If you like any young adult, vampire or werewolf books this series is for you.

I hope Eaves continues the series or creates similar ones as I love her stories and how she develops characters. Her take on all things paranormal is wonderful and she brings it to life so well.

This was a really interesting series and concept. I liked the way that the author was able to wrap everything up and I enjoyed the suspense aspect leading up to the end. Holly holt is also a fantastic narrator who really pushed this one and made it great

The Endangered Series enjoyed the book very much well written by S.L. Eaves
Narrated by the wonderful Holly Holt who brought it all to life