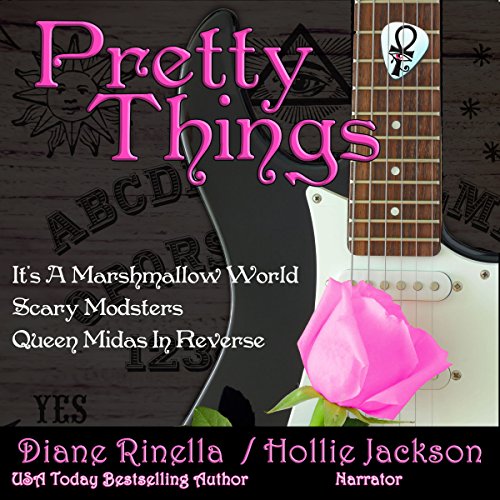 Rosalyn and Friends, Books 1-3
By: Diane Rinella
Narrated by: Hollie Jackson
Series: A Rock and Roll Fantasy, Book 1-3
Length: 12 hrs and 10 mins
Categories: Romance, Fantasy
4 out of 5 stars 3.8 (10 ratings)
This title is included in Audible Escape

This special set includes the first three standalone books in the collection including an extended version of Queen Midas in Reverse.

It's a Marshmallow World (novella).

Once upon a time, Darla was given a mystical gift, along with an ominous message. Now, meeting Chris puts her head in a spin. Could it be that gift from long ago holds the key to their happiness?

A fantastical romance involving a woman, the music that fuels her, and her Ouija board.

Rosalyn possesses a sunny personality that is laced with quirks. Although she seeks acceptance in a world where she lives out of time, what she gets is ridiculed for her eclectic wardrobe and unconventional music collection.

One fateful night, Rosalyn bewitches Niles, a stylish man whose offbeat character perfectly complements her own. Unfortunately, he possesses a critical flaw that means relationship suicide for him and pretty much anyone.

While under the influence of insomnia-impaired judgment, Rosalyn summons Rock 'n Roll deity Peter Lane back from the dead. Not only does he spin her hormones into a frenzy, Peter is also the precarious puzzle piece that brings sense into her world. When Niles learns that he can overcome his life-long challenge by helping Peter avenge his death, how far will he go to secure Rosalyn's heart?

For Jacqueline, a second date is as rare as a unicorn. She's beautiful. She's intelligent. So why is she experiencing a string of first dates that leaves her ducking behind bushes and running for buses? Contrary to her nature, trading in her heels and curling iron for an easy chair surrounded by cats sounds appealing. Is she cursed, or can she find the man who will steal her heart?

OK. I must admit, Marshmellow World left me unimpressed so I stopped listening for awhile. When I started upon again, I was surprised and intrigued by Scary Modsters. I love Peter! It's theme could have been the basis for a longer book with hotter sex. All in all, all three delivered fresh storylines.

Narrator was very good. She did Peter's voice in a way that reminded me of Bones in The Night Huntress series. Maybe that's why I liked Peter so much.

One Thumb Way Up.

I got this book via audiobook boom. This was a story that kept me asking what the___ the more I listened to it. Tha narrator sounded like a sixteen-year-old which made me think this was YA book. I could not follow the story. She did a lot of cursing and telling what was going on. I kept trying to listen to the story but could not make it through the first one. I wanted to like this story but it was just unreal.

The Pretty Rock and Roll..


This book set is comprised of three stories that cover a Ouija board, a special gift , and a unicorn.

The characters were well developed, quirky, yet, complex and the story line covers loyalty,

Hollie Jackson did well with the narration.

Oh, the power of never-fail girlfriends

Would you consider the audio edition of Pretty Things: The Rock and Roll Fantasy Collection to be better than the print version?

With audio books, I don't get caught up in the mechanics of the writing, so from that respect, reading with my ears is freeing.

Rosalyn was probably my favorite character, but that's because we got to spend the most time with her in the second of the three stories, Scary Modsters and Creepy Freaks. She's strong and quirky and surprising.

What does Hollie Jackson bring to the story that you wouldn’t experience if you just read the book?

Jackson does a great job with the different voices of all the characters in the three stories. In reading, most of the characters sound the same in my head!

I definitely had some laugh out loud moments as well as some tender ones, especially with Gran-Gran in It's A Marshmallow World.

Rinella's characters are real, robust, and ridiculously fun. Listening to these stories was time well-spent.

Would you listen to Pretty Things: The Rock and Roll Fantasy Collection again? Why?

absolutely!
firstly, I Love this narrator! Hollie Jackson is amazing and brings depth to the characters and story
second, this is a quirky and fun series

it was fun and quirky
I enjoyed the paranormal aspect in the first two books, the friendship between the three gals and how individual they are
these stories have a little bit of everything you want in an entertaining story

Rosalyn's sorrow ... she is such a happy and fun character that he sadness was heartbreaking

i was gifted this audiobook after i requested the honor to review it!
I am so grateful that I was choosen to review this ... Diane Rinella is a new author to me so i had no idea what to expect with her books
her characters are amazing!
It's a Marshmallow World & Scary Modsters...and Creepy Freaks have a paranormal flare that is fun and exciting ... add in falling in love ... it's VERY entertaining!
Queen Midas in Reverse ... can't we all relate to bad first dates?

These are TOTALLY worth buying and listening too ... fantastic
I can't wait to listen to more by this author

All the stories are really good and well written. I enjoyed the journey I went on with the characters. They were easy to connect to and like.

Would you consider the audio edition of Pretty Things: The Rock and Roll Fantasy Collection to be better than the print version?

I loved listening to the audio version and I wouldn't know the answer to this as I did not read the books.

These are three fantastic stories with a hint of paranormal. Loved it and the narrator did a fantastic job !

Would you listen to Pretty Things: The Rock and Roll Fantasy Collection again? Why?

Absofreakinglutely!
This fun group of friends and their stories just melt your heart! How I'd love to find a place like Mulligan's and get my closest group of friends together for a "Cheers" atmosphere of camaraderie and adult beverage. Life is much too serious, so why not have a groovy cool rock and roll fantasy set to read with characters you come to love <3

Hands down, it's Niles. Keep in mind, I'm a product of the sixties, so his funky, eclectic style made me swoon. He's such a gentleman!

It was a tearful, heartbreaking moment in Scary Modsters where Rosalyn reveals something from her past. TOTALLY didn't see this coming and I actually teared up.

In It's A Marshmallow World, I was so moved by the relationship Darla had with her Gram Gram....It's a beautiful relationship and call me sappy, but I was moved by it.

Also, in Scary Modsters, when Rosalyn and Niles finally got together, it was pretty moving and groovy too!

I'm a huge fan of Hollie Jackson - this narrator can do absolutely ANYTHING! The voices she gives to Ms. Rinella's quirky characters is pretty darn incredible.

As I said, being a product of the sixties and a huge music lover, I found these stories to be so entertaining and I look forward to more.

The only way this would have been a better listening experience was if there had been a different narrator.

What was most disappointing about Diane Rinella’s story?

Let me state that I couldn’t even finish this audiobook. I forced myself to complete Part One and that was it. I attempted Part two but no.

I had so many issues with Part One (“It’s a Marshmallow World). The story seemed more like diary entries to me with a very immature/juvenile sounding main character (for example, ‘that bites’, ‘that sucks’). Instead of being able to experience the story, it was more told to the reader. As in, so-and-so did this, then she did this, etc. The story went from one scene to the next and there was barely any dialogue. Was Darla even described? If she was, I don’t even remember what she looked like besides the multi-colored hair and wild clothes later on in the story. What exactly was the point of this supposed story anyways? It didn’t catch my attention AT ALL!

I wasn’t really a fan of this narrator. She was WAY too upbeat, perky, enthusiastic, (any other positive word you can think of) and it was really annoying. It made it hard for me to focus on the story. She also lacked a variety of voices for the characters. The females pretty much sounded the same (for example, a seventeen-year old and a ninety-two-year old sounded about the same age except GranGran had a somewhat country sounding accent); likewise, the men sounded alike. When the narrator went from telling the story to being a character who was talking, most of the time I wasn’t even sure what was happening.

So the story starts off with Darla whose seventeen and then suddenly jumps to her being a different/older age. I don’t know if I missed something or what. Where they flashbacks/flash-forwards? If so, there were no transitions whatsoever.

What time period was this story supposed to be taking place during? I ask because it was weird that the main character’s friends were jealous that she had her own cell phone.

The lead character ends up asking for bleach from her sister after their gran dies. Now I don’t know if gran died while she was young…because you don’t hear anything about it until she’s obviously older and has multi-colored hair. That whole jump forward in time was really confusion.

What was with Chris? When he was complimenting/flirting with Darla and her friends and then later with just Darla, I swear it sounded like he was reading from something. It was very unnatural sounding. I don’t know if that was the way it was written or because of the narrator.