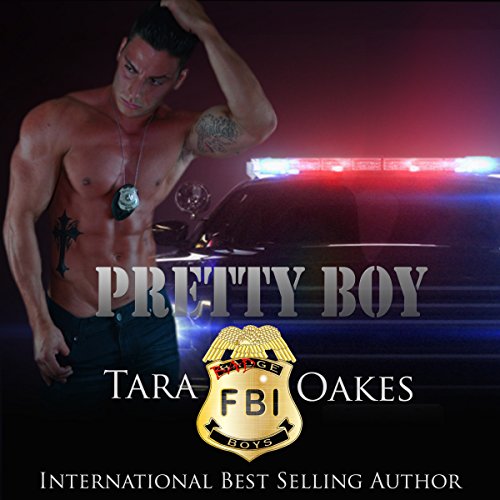 By: Tara Oakes
Narrated by: Leyna Baltimore
Free with a 30-day trial

*** WARNING *** This novel is intended for those over 18 yrs. of age due to mature and sexual material.

"Didn't anyone ever tell you what happens to BAD girls? Well... let Pretty Boy show you."

Agent Christopher Gibson has everything a man in his position could want. A successful career as one of the FBI's most credited undercover field agents, with no personal ties to hold him back. He tried that once, it didn't go over too well.

Jessica Leary is on her way to the top, working on her father's Senate re-election campaign. She has the job she wants- the opportunity to prove herself to both the political elite and her father.

What could these two people from very different worlds ever have in common? Nothing.

Nothing other than a hot, sexy, torrid love affair that was left in the past- torn apart by the different directions their lives were headed. Now, months later, Jess finds herself in a perilous position. The past that once brought "Pretty Boy" Chris Gibson into her life has now come back to haunt her, threatening everything that she's worked for.

When trouble comes knocking on your door, what's a girl to do? Why, call your bad-ass, sexy-as-sin, FBI agent of an ex-boyfriend to do what he does best... take down the bad guys and anyone else that stands in his way, because when Pretty Boy sets his sights on a target, nothing distracts him. But, why is it that this time is different?

Being close to Jess again, seeing first-hand what he's given up is just enough to throw everything off course, as Jess seems to be the perfect mix of good AND bad girl.

Didn't anyone ever tell you what happens to BAD girls? Well... let Pretty Boy show you in book one of the brand new BADGE BOYS series of standalone novels.

What listeners say about Pretty Boy

What a start to a series!

--I was given the audiobook in exchange for an honest review.

This book was fast paced, suspenseful, hot and all out fun. It was a fast, enjoyable listen. Jessica, the senators daughter needs the help of an FBI agent, and who better to ask but her ex, Chris. He is good at what he does, is married to his job and still is in love with Jess. She broke up with him because he did not have enough time for her. Together, will they find who is trying to blackmail the senator? I cannot wait for book two to be released, this is a good series.

Leona Baltimore brings this story to life. Her voice is perfect. Sensual, rough, sweet..fits every scene and character. She made it extremely easy to listen to.

I was voluntarily provided a free review copy by the author, narrator, or publisher at my request

Pretty good story. It was well narrated and very fun to listen to.

glad i listened to this. i loved it

This story will shock you

This story will shock you with every turn. You will get so involved that you can't put it down until you have finished.
"This audiobook was provided by the author, narrator, or publisher at no cost in exchange for an unbiased review courtesy of Audiobook Blast."

If It's Meant to Be, It Will Be

What did you love best about Pretty Boy?

I loved the fact that Jessica and Chris were able to reconcile and find their way back to each other.

I loved the mystery and the fact that the amazing sex was worked in so well. It actually enhanced the story. I also loved the twist at the end (even though I had already suspected it was who it was...)

Which character – as performed by Leyna Baltimore – was your favorite?

My favorite character was Christopher. He was spontaneous, caring, determined and went for what he wanted. He was also really good at his job.

Beside every bad boy, is a good bad girl... Or something like that lol

I would definitely recommend this book to anyone who needs a good, fast, hot read.