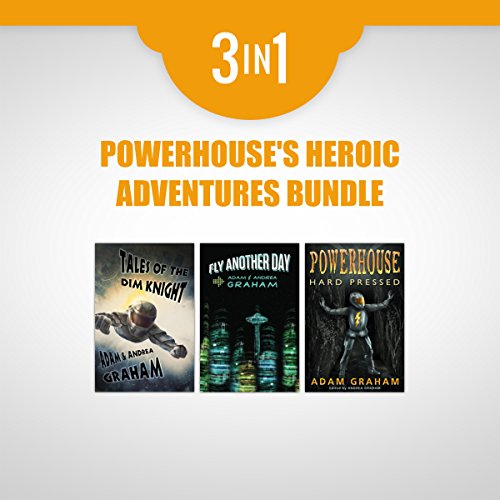 In Tales of the Dim Knight, mild-mannered janitor and superhero fanboy Dave Johnson gets all his wishes at once when an alien symbiot gives him supernatural powers. But what's he to do with them? Follow his laugh-a-minute progress as he fights crime and corruption while trying to keep his family together and avoid being sued for copyright infringement.

In Fly Another Day, it's been a year since Dave Johnson lost his powers. Now, a new menace has emerged, leading Dave to gain his powers and once again confront evil as Powerhouse. In this audiobook of new adventures, Dave battles kidnappers, robbers, and even a gang of rampaging robotic lawyers.

In Powerhouse Hard Pressed, Dave Johnson's dreams have come true. He's taken Seattle by storm as Powerhouse, a metal-clad crime fighter, but Mitch "the Pharaoh" Farrow wants to turn Dave's dream into a nightmare. Mitch's job is to spread cynicism ahead of an interdimensional alien invasion. With the help of new allies and old friends, Powerhouse strives to protect his family from the forces of cynicism.

A well written collection of superhero stories with tributes paid to some of literature's best known detectives.
A very enjoyable listen.

This is a childish and supercilious comic

What could Adam Graham and Andrea Graham have done to make this a more enjoyable book for you?

Who might you have cast as narrator instead of Scot Wilcox?

If you could play editor, what scene or scenes would you have cut from Powerhouse's Heroic Adventures Bundle?

This is not worthy of being classified as science fiction