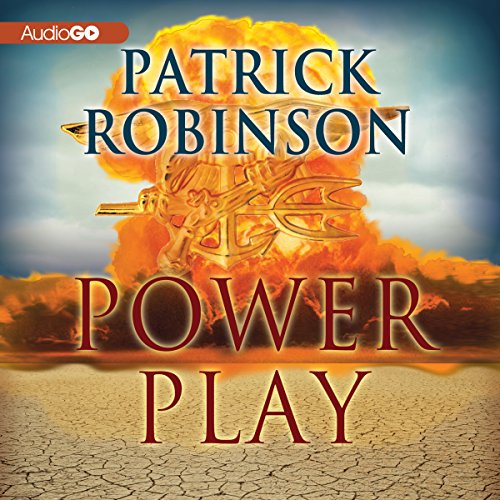 By: Patrick Robinson
Narrated by: Joe Barrett
Try for $0.00

The year is 2018 - a highly volatile nuclear world. Israel has obliterated the deep underground nuclear weapons facility built by Iran. The United States has destroyed the nuclear facility of a defiant North Korea. The Russians have upped the stakes in the latest world power-play - cyber warfare - to reduce the United States to helplessness: a three-strike missile attack on the National Security Agency at Fort Mead, Maryland, while simultaneously jamming the top-secret electronic access key to America’s nuclear launch system - the nuclear football. If successful, Russia would blow the United States off the nuclear map.

Meanwhile the British Royal Navy, formerly the most powerful in the world, is rapidly crumbling, leaving the United States without its main deep-sea ally at a time when they’re needed most. As this geopolitical battle comes to light behind closed doors dealings and dark secrets, it is up to Mossad spymaster, codenamed the 'Golan', to avert the Russian scheme, and there is only one man he in turn can trust to get the job done: US Navy Seal Mack Bedford.

It’s up to Mack Bedford to devise a plan to stop the Russians before they and their cyber weaponry reach the Chinese border - the launch site of their master plan. And with the entire country’s fate in his hands, Mack and his hard-trained, one of a kind SEAL Team 10 must not, cannot fail.

What listeners say about Power Play

Power Play is the latest in the Mack Bedford series. At this point there is no doubt that the old Patrick Robinson style of the Admiral Moran series is not coming back. In that series, Robinson made you feel for the villain almost as much as for the hero.

Power Play is about a resurging Russian nation and a plan to strike back at the United States for making it feel impotent. The plot is interesting and there are plenty of twists -- however, many of these twists are foreseeable and the story lack surprise and depth. Joe Barrnett did not add any punch to the story, his character voices were mainly flat and without emotion.

This is a fence novel in that, if you are a eager fan of Robinson - listen ; if you are considering reading this novel as a first Robinson reader -- I'd pass. I am going to pass on novel 5 if it is ever released.

Slow moving, with dull characters made worse by the monotone and uninteresting narrator. Bring back George Guidal!

Cannot keep changing the narrator in an ongoing

1st and foremost all of these books are a slow burn if you're not into the slow burn don't even bother.
2nd if you're listening to this book as a standalone you shouldn't enjoy it just fine if you've listened to all the other books in this series it's in this series you're going to want to put a bullet in your skull. The main character Mac Bedfords Accent keeps changing because the narrator keeps changing the 1st 2 books the narrator made it narrator made a base for this character and it was good and it was good good accents as he traveled the world to change who he was but whenever he went to his homeland in Maine he had that good he had that good mainland Boston accent. In book 3 that guy did not even attempt to maintain the accent just sounded like a good old boy. flat out American, The guy in this book I have no idea what the hell hes doing at 1 point he sounded Scottish is Scottish. Can't even continue listening to it the character is ruined and therefore the story is crap. my opinion

The best Patrick Robinson book yet!

If you could sum up Power Play in three words, what would they be?

What other book might you compare Power Play to and why?

Other books by Robinson, Tom Clancy books, Marc Cameron books They are all military/what we could face. I would cal them realfiction.

I can't tell because it would spoil the book so I will just say the build up to the seals mission.

Oh yeah. Things kept getting in my way of listening to it straight through.

If you like Clancy but a little shorter, get this book.

I enjoyed the novel; but the author's love of Ireland was distracting. Ireland has been a consistently a neutral nation; I found the idea that they would allow a US base on their soil implausible,

During WW2 thousands of Allied sailors (both merchant marine and military) died because Ireland denied Allied use of their southern ports for anti submarine duty. At the end of the war they sent a delegation to express their official regrets when Hitler died; they expressed no regrets when Roosevelt died.

As a neutral this was their right; but the idea that they would change so dramatically to balance their budget was just too much.

Nor his best work.

I like this authors other books, and enjoy the personality of the personality’s of Ramshaw, Morgan, and Bedford. Unfortunately this entry fell flat. The premise was far-fetched in by the standards of these types of books, there was no character development, and even the action sequences were unnecessarily abbreviated. Most annoying was the author’s apparent fixation with Ireland becoming the 51st US state. Well that could be another story Internet itself, what little foundation this book did lay for it was so perfunctory and naive that it would have been better to leave it out.

If you like Robinson’s other books, the first two entries in this series are great and the Arnold Morgan series is fantastic. Every author gets to have at least one bad book. I would recommend skipping this one.

to long to get to the fun

just like the prior book the beginning has little to do with the main character and you know where the story is going. and the last few chapters is what I wanted.

Well, I still enjoy these stories. This one was slow to develop and still slow to the end. It lacked even the excitement during the battle for the ship.
Hmmm
Regroup?

Again, book 4 disappointing Mack Bedford story. Not much about Mack! The epilog didn't even mention him once!

Historically inaccurate, the regional accents were the worst I have ever heard on an audio book, still have no idea why the whole Irish base thing was even part of the story. If this had been my first of the series it would have been the last the ending was terrible.