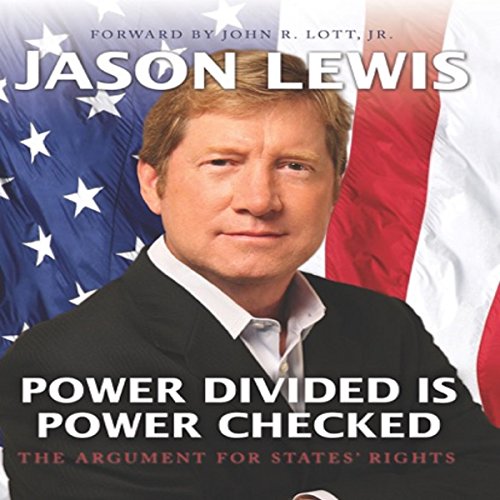 The Argument for States' Rights
By: Jason Lewis
Narrated by: Jason Lewis
Length: 3 hrs and 45 mins
Categories: Nonfiction, Politics
5 out of 5 stars 4.8 (31 ratings)

Jason Lewis reminds us that the concept of states' rights, as bequeathed by the Founding Fathers to a grateful nation, was about a constitutional framework intended to limit the missteps of government and provide the greatest amount of freedom by not allowing the consolidation of power in the nation's capitol. He defines the essence of our constitutional republic and highlights the legal history of the relationship between the states and the federal government.

Lewis sounds the alarm for states' rights and offers a way out of the constitutional confusion the nation has witnessed with several recent Supreme Court opinions. But if his prescription for returning power to the states seems radical, Lewis would argue that this is only because we are unaware of just how far America has drifted from our limited-government tradition. He calls upon us to understand what it means to live in America, recognize how fragile our republic has become, reclaim our tradition, and, in doing so, reclaim our liberty.

In the bonus commentary from the audiobook, Lewis further describes the judicial unraveling of our liberties and offers insight into the factors that play a part in the continued erosion of our constitutional protections as evidenced by the recent Supreme Court decisions related to health care, same-sex marriage, immigration, religious liberty and property rights. Lewis, who holds an MA in political science and is a talk-radio veteran, narrated this audio version of Power Divided Is Power Checked.

''[Jason Lewis] has been a force in Minnesota for two decades, lacerating Democrats, centrist Republicans and conservative apostates. He is to Minnesota Republican politics what radio titan Walter Winchell was to New York politicians: a force capable of delivering migraines.'' - ( The Washington Post)

So informative it makes me angry

Jason lays it out so well and understandably that I cannot believe we haven't solved this yet.
Thanks Mr. Lewis

Jason takes a deep and thoughtful look at the history and principles behind states rights in America. He is one of the great teachers of our day--Mr. Lewis presents information in a clear, concise, and entertaining way. I especially enjoyed the bonus commentary provided at the end of the book.