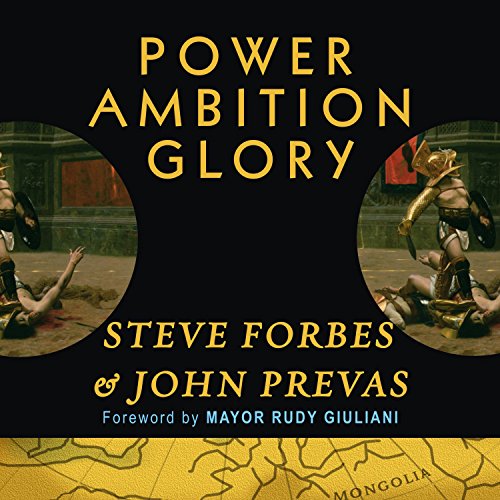 By: Steve Forbes,John Prevas
Narrated by: Alan Sklar
Try for $0.00

Based on an extraordinary collaboration between Steve Forbes, chairman, CEO, and editor in chief of Forbes Media, and classics professor John Prevas, Power Ambition Glory provides intriguing comparisons between six great leaders of the ancient world and contemporary business leaders.

Great leaders not only have vision but know how to build structures to effect it. Cyrus the Great did so in creating an empire based on tolerance and inclusion, an approach highly unusual for his or any age. Jack Welch and John Chambers built their business empires using a similar approach, and like Cyrus, they remain the exceptions rather than the rule.

Great leaders know how to build consensus and motivate by doing what is right rather than what is in their self-interest. Xenophon put personal gain aside to lead his fellow Greeks out of a perilous situation in Persia---something very similar to what Lou Gerstner and Anne Mulcahy did in rescuing IBM and Xerox.

Character matters in leadership. Alexander the Great had exceptional leadership skills that enabled him to conquer the eastern half of the ancient world, but he was ultimately destroyed by his inability to manage his phenomenal success. The corporate world is full of similar examples, such as the now incarcerated Dennis Kozlowski, who, flush with success at the head of his empire, was driven down the highway of self-destruction by an out-of-control ego. ---A great leader is one who challenges the conventional wisdom of the day and is able to think outside the box to pull off amazing feats. Hannibal did something no one in the ancient world thought possible: he crossed the Alps in winter to challenge Rome for control of the ancient world. That same innovative way of thinking enabled Serge Brin and Larry Page of Google to challenge and best two formidable competitors, Microsoft and Yahoo!

"Steve Forbes knows the importance of history, and this book brings that to our attention in a fascinating and pertinent way.... People in all fields will learn and be inspired by it." (Donald Trump)

As an admirer of Steve Forbes with an interest in leadership I gravitated to this book and I was not disappointed. The strength of this book does not come from insights into leadership, per se. Rather, the book informs us about ancient leaders and the situations they encountered. Those incidents and stories are juxtaposed with the experiences of contemporary industrial titans. Parallels are drawn and generalizations presented. The book was well written, thoughtfully organized, and read. It is worth your time.

I have two observations about the book. First, in the first quarter of the book the reader pauses between (it seems) every paragraph read. That was a bit distracting for me personally. However, that changes later and the problem goes away. Second, the book seems like two books - one on ancient leadership and one on contemporary leadership. I would like to see a more expanded thoughtful book on the ancient leaders by John Prevas. I would also be interested in more stories and comment from Mr. Forbes related to contemporary leadership in this environment.

This book was a requirement for an academic course. In the beginning I was not thrilled to read it, but as the pages turned (I have the book as well, purchased audio for multitasking purposes) I found myself intrigued by relation of past leaders and today's corporate culture. This is a great read for anyone, because we all lead in some capacity.

Wow, what a history lesson

I totally enjoined the book. Ancient history by John Prevas coupled with Steve Forbes commentary on recent history then tyeing it all together in a understandable and motivating book. Brilliant.