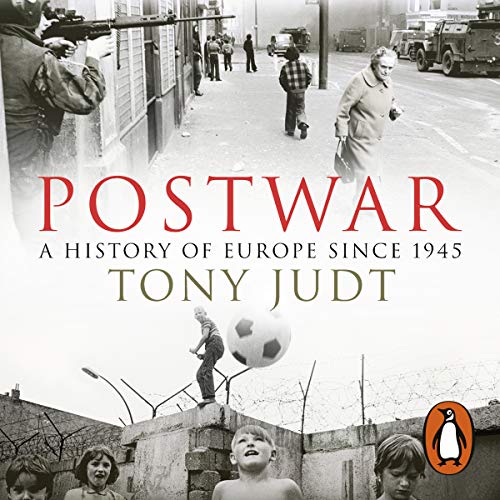 Tracing the story of postwar Europe and its changing role in the world, Judt's magnificent history of the continent of our times investigates the political, social and cultural history of Europe from the wreckage of postwar Europe to the expansion of the EU into the former Soviet empire. Judt's stress is on the continent as a whole, from Greece to Norway, from Portugal to Russia.

This, uniquely, is a history that pays due attention to both Western and Eastern Europe, to cultural and social developments as to political and diplomatic events. Throughout Judt shows how politics, society, culture and popular culture influenced each other. A masterly and definitive history of our continent in a crucial period of its history, Europe in our time.

What listeners say about Postwar

I was not very knowledgable in post war European history and this book was a great source of information. I read it from cover to cover and even bought a paper version of it.

I was surprised that the author is not biased at all. It is an intense reading full of facts and names. It helped me to understand where many contemporary problems started as well as connect many dots in history of my country (Czechia).

Great listen, even though it does hold plenty of facts that are hard to remember without actually reading. nevertheless it was incredibly interesting and fulfilling to understand Europe.

This book is essential reading for all those who want to have an understanding of how Europe became to be what it is and what it didn't become. We can't hide from our past and mistakes, but the last decades we are certainly trying to ignore them, a trent the author did foresee. The narration was engaged and very suitable for this kind of complex work.

The Definitive Survey of Europe After WW2

A lot happened after world war 2 and until about 2007 and this book endeavors to give you an overview of it all. This is essential reading for this period and something that I even find myself coming back to when I need context for another title.

Extremly learned and facinating. Some will probably argue that it contains too much of jewish suffering/extermination, but i think it's proper when thinking about the abyss nazism created. It gives interpretational depth also to other forms of totalitarian ideologies.

I thoroughly enjoyed this book. Full of insights and challenges from an eastern European perspective. Small grips about pronunciation from the author, lack of chapter headings, sentence structure not conducive to understanding when heard first time, issues with syncing across several devices. But still a must read.

Vast in scope and detail. It behoves Europeans to remember well our troubled past, for it is all to easy to forget. This book offers little comfort, instead it forensically dissects the different currents of shared European postwar experience, and reveals starkly the abyss upon which our civilisation is built. A magnificent work of history.

An astonishing book and performance

I can't recommend this book highly enough. it covers all the most important and interesting political, social, economic and intellectual developments of Europe's postwar period. I had a reasonable foundation in the history of the period, but still found every chapter fascinating. It's comfortably the best history book I've read.

The audio performance is also very engaging and the author is very easy to listen to even up to 45 hours.

The narrator is not good unfortunately. Not bad, but his voice lulls me to sleep. It's a pity really...

outstanding book. It's the best explanation of Brexit I've heard from decade before the referendum

All Europeans old and young should listen to this audiobook. Highly educational and lovely to listen to.

Very good book, although I am slightly annoyed by another narrator constantly dubbed over the pronunciation of names.

Obviously the narrator struggled with quite a lot of pronunciations, however rather than re-recording at the time with the correct pronunciation they have overdubbed using a low quality microphone later.

In my opinion it's not listenable and should be removed from Audible.

I thought this book and audiobook was a thoroughly detailed account of the recovery of postwar Europe.

I don’t think you could find a better narrator for this body of work.

I constantly go back to listen to refer to chapters and are in the process of ordering a physical copy of the book.

well worth a read for all students of politics

A slow building narrative that ultimately leaves you with a great understanding of the role of memory and memorislisation. the role of the welfare state and the emergence of the EU. well worth a read eventually got use to the voice you probably will too as it's a monster of an audiobook in length.