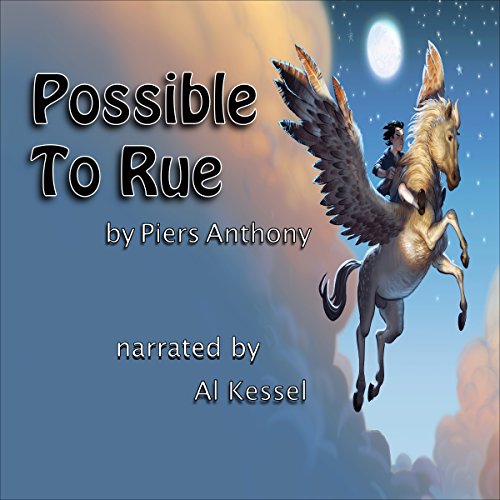 By: Piers Anthony
Narrated by: Al Kessel
Free with a 30-day trial

In this comedy by the legendary Piers Anthony, the six-year-old son of a wealthy man wants a pet for his birthday, so he promises his son to get him whatever he wants. Well - the boy wants a Pegasus! The father, knowing such an animal does not exist, proves it to the boy by grabbing the encyclopedic edition for that very entry. Not only do they find the Pegasus doesn't exist, but the animals they know exist in fact - do not! It all goes downhill from there as the father frantically searches for a pet for his beloved son. Is everything merely mythical? Do any animals actually exist?

What listeners say about Possible to Rue

The boy wants what he wants - a winged horse!

The boy wants a pegasus. What is the father to do? Being a wealthy man, he had promised his 6 year old he could have whatever he wanted for his birthday. Of course, he wasn’t expecting the lad to ask for a mythological creature!

What ensues is creative fun involving an encyclopedia and several other animals. This short story was a joy to listen to as it was both clever and filled with child-like wonder. And perhaps a touch of 6-year old stubbornness. :) With a touch of adventure and beauty, Piers Anthony has the reader looking as reality in a different light.

The ending was fun and satisfying. Even though this story is probably marketed for kids more than adults, I felt that it was good fun for this 36-year old!

Narration: Al Kessel did a good job with the narration. He had distinct voices for the characters and injected emotions into the story. He especially did ‘wonder’ quite well. I liked his little kid voice the most.

What I Liked: The cover art; magic in the mundane; the pegasus of course!; questioning reality in a fun way.

What I Disliked: Nothing – I think this is a great short story!