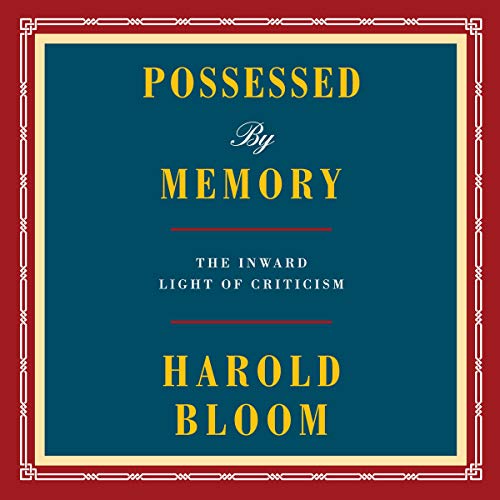 By: Harold Bloom
Narrated by: Stephen Mendel
Try for $0.00

In arguably his most personal and lasting work, America's most daringly original and controversial critic gives us brief, luminous readings of more than 80 texts by canonical authors - texts he has had by heart since childhood.

Gone are the polemics. Here, instead, in a memoir of sorts - an inward journey from childhood to 90 - Bloom argues elegiacally with nobody but Bloom, interested only in the influence of the mind upon itself when it absorbs the highest and most enduring imaginative literature. He offers more than 80 meditations on poems and prose that have haunted him since childhood and which he has possessed by memory: from the Psalms and Ecclesiastes to Shakespeare and Dr. Johnson; Spenser and Milton to Wordsworth and Keats; Whitman and Browning to Joyce and Proust; Tolstoy and Yeats to Delmore Schwartz and Amy Clampitt; Blake to Wallace Stevens - and so much more. And though he has written before about some of these authors, these exegeses, written in the winter of his life, are movingly informed by "the freshness of last things".

As Bloom writes movingly: "One of my concerns throughout Possessed by Memory is with the beloved dead. Most of my good friends in my generation have departed. Their voices are still in my ears. I find that they are woven into what I read. I listen not only for their voices but also for the voice I heard before the world was made. My other concern is religious, in the widest sense. For me poetry and spirituality fuse as a single entity. All my long life I have sought to isolate poetic knowledge. This also involves a knowledge of God and gods. I see imaginative literature as a kind of theurgy in which the divine is summoned, maintained, and augmented."

Includes a PDF diagram from the book.

"These essays reveal a deeply personal attachment and fresh perspective. An eloquent and erudite rereading of the author's beloved works." (Kirkus Reviews)

"A rich lifetime of readership and scholarship can be found within the covers of this equally rich book." (Publishers Weekly)

"Describe is what he does, perhaps more brilliantly than anyone else alive." (Esquire)

What listeners say about Possessed by Memory

laden with poetry &laced literary insights, cannot get enough,will listen to this over and t, like a compelling piece of music.

This is an incredible inheritance for anyone who delights in a very personal tour of literature. Here, great poetic (broadly speaking) writing is embroidered with the rich expertise of one of the great scholars and public intelligence our time. I was particularly moved by the section on A.R.Ammons, who turns out to have been Bloom’s dear friend. Bloom is not only encyclopedic in his knowledge of poets but actually has spent time and/or corresponded with many of them personally. And his exegesis of Biblical passages is also memorable especially his review of the Book of Job. The familiar—and fair—critique applies that Bloom has noticeably few entries other than “dead white men.” But this is his experience and, fortunately, one can now turn elsewhere to read beyond that canon. Overall, this is a masterpiece.

A scholar's book without crystal clear presentation. Too many names, more facts than can be absorbed. Pace of reading too fast. A sad story.