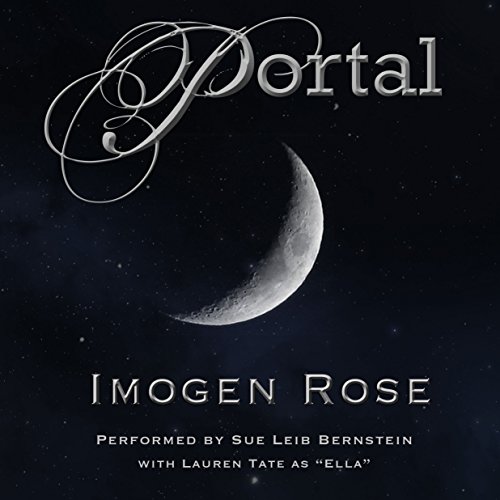 Come Find Me Two Years Ago...

She suddenly finds herself living the life of a glamorous cheerleader. She finds herself transported from her happy life with her dad to living with the mother she hates. Everyone knows her as Arizona Darley, but she isn't. She is Arizona Stevens.

As she struggles to find answers she is certain of two things - that her mother is somehow responsible, and that she wants to go back home to her real life. That's until she meets Kellan...

Portal is the first book of the Portal Chronicles.

The narrator made this a tough read. Love the books but the narrator's inflections and accents are pretty terrible, the worse being the valley girl accent. I love this series but cannot go on if they don't change to a more seasoned narrator.

Portal is a very good book. However, it was difficult for me to listen to the woman reading it. I just didn't care for her voice. That did not take away from the book itself tho and I did enjoy the book.

Would you listen to Portal: Portal Chronicles, Book 1 again? Why?

Yes, I loved the narration and the story line.

What was one of the most memorable moments of Portal: Portal Chronicles, Book 1?

When Arizona discovers that she is a blonde.

It made me laugh in numerous scenes.

Great book and wonderful narration. I can't wait for the next in the series.

I have read this book series over and over again! I absolutely love this story! When I got the opportunity to listen to the audio version of it I was super stoked! The performance was amazing, and brought out a whole other feeling to the story for me. I can't wait until the other books are on here so I can listen to those as well!

i loved this book when i read it. ...having it come alive in an audio book is amazing. the world's imogen rose has built this story around are wonderful. it keeps you guessing

Interesting start, then what a mess....

It started off as a promising idea, the first few chapters, even the original song, I really like the dreamy quality of it. Then, it just falls apart, I felt like just when the main character would try to tackle something important, she'd just get distrated by the most mundane situations - choosing clothes, walking the dog, etc. The dialogues are terrible, I can't imagine a teenager, particularly the guys, talking like that. The ending and parts of the story are just too confusing to follow. It feels like such a waste of a good concept.

Painful to listen to.

A different narrator and a little more to the story. It felt all over the place and too much attention was given to the littlest detail.

Would you ever listen to anything by Imogen Rose again?

Maybe but I'd have to know that it was better than this.

What didn’t you like about Sue Leib Bernstein and Lauren Tate ’s performance?

I liked the narrator who did the little girl but the main narrator was awful. I hate giving bad reviews and rarely do but honestly, it was painful to listen to her. She made all the teens sound like they were from the movie Clueless!!! It was unrealistic.

Not Sure About the Book - Hated the Narration

I am really not sure how I feel about the book.

The narration is not that good. The narrator tries to do these different accents and voices; they are pretty awful. Not only that, but there are times her attempts at accents are given to another person. Example, a California Valley girl voice for character A but later it is now character B. The way she read the boy parts made the characters seem a little slow as in unintelligent or even, I am not even sure how to describe it, like they have no backbone. Some men are usually strong characters, but these men are a little wimpy.

The nicknames for Arizona where horrible. I get the brother calling her shrimp but who allows their boyfriend to call you shrimp. Doesn't seem even remotely cute. Shrimp has a meaning of being an insignificant person. Arizona tells Kellan not to call her that anymore towards the beginning but feels guilty and allows him to continue.

The book briefly touches on the science as in you know there should be something scientific about this portal but nothing is really developed in regards to the portal. Just touch and go on anything portal. It was really never explained. It was like the book was written and then an idea was thought of so the author went back through and a few hints here and there to say it was sci-fi.

I had a hard time trying to figure out Ella, the younger sister. It was difficult to tell her age when you are being told she is 8. Arizona is this tomboy in one dimension but a "Barbie" (as she refers to herself) in another. She can remember parts of both lives, so why does she need to rely on her 8 year old sister to pick out her clothes and suggest how to act. In the beginning of the book, Arizona hates her sister but in a few paragraphs she adores her. Ella was a difficult character to believe and 8 year old's do not speak the way she does or is so insightful, even up and coming actresses.

Then there are the way the kids all act and talk. The way they spoke was so formal and nice. Even during the fight scenes (if you can really call them that) they were so pleasant to each other. In addition, they grew up in America. Yes, Olivia (the mom) is British, but there is a lot of British wording/slang used by these teens in high school, even teens not from the same household as Arizona. What normal American teenager would refer to the parking lot as car parks.

Of course, they are all rich with huge houses, credit cards, Harleys and Porsches. They were middle class in one dimension but when they are moved to another, they are filthy rich but yet they go to public school. Some of the conversations and actions of the kids just don't seem to fit. The father she left behind is a drunk and now she has landed in this perfect family, a few more kids and they would have been the Brady Bunch. She only had trouble adjusting at times and other times she seemed fine with everything.

The other thing I had issues with was all the name brands. Every time she changed or got dressed it was this designer or that one. That "designer name" purse. Those "designer name" shoes. It was throughout the book. There was a lot of brand names in the book. It sometimes felt like it was a commercial, catalog or magazine ads there was so much. Some description is OK, but I am trying to read a book and connect with a character, not worry about her iPhone, her jean brand, or shoes.

Olivia, the mom, is supposed to be so smart that she create this portal to bring her to another dimension so she can be with someone else, yet she can't even have a conversation with her daughter. The end of the book, when the "talk" finally happened, Olivia had to have Rupert, her boss, and Arizona's boyfriend in order to attempt to explain what happened but even then, there wasn't so much explanation. Olivia seemed rather self-centered and selfish. At the beginning of the book, Arizona is going on and on about the conflict and anger she has towards her mom, but after a few paragraphs, it fizzled and everything is good. There was no real confrontation between Arizona and her mom.

I think the book has great potential and maybe since I listened to parts and read parts, it was a little more aggravating because of the narration. I had a really hard to connecting with any of the characters but the idea behind the book is good, just under developed. I am not sure if I will get the next book or not. The book has me on the fence on liking it or not. Even though there were good parts, they seemed to be overshadowed but the not so good parts.

I found Portal to be confusing at times and a little boring. No desire to listen to the next book.

Narrator made this book almost unbearable

The book was interesting enough, if confusing at times, but the narrator ruined it.

I have the series on kindle and was looking forward to listening to it but I wasn't impressed by the music in fact it spoiled it for me and you could have found a better narrator, it is only my opinion, I do like the story