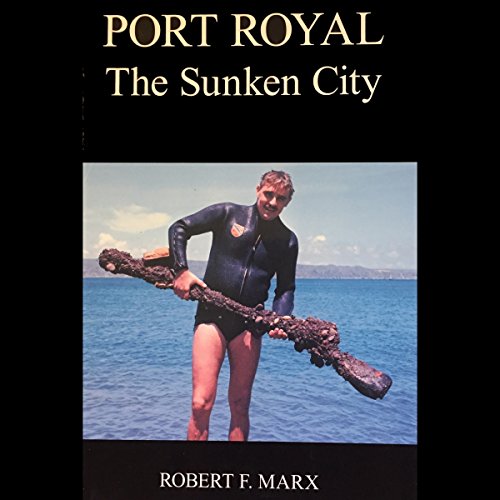 The true story of the city of Port Royal in Jamaica. In 1692, an earthquake and tidal wave caused the city to sink beneath the sea. Robert F. Marx was one of the men caught up in the legends of buried treasure and this audiobook describes the fulfillment of his childhood dream: a two-and-a-half year exploration of the historic Jamaican port.

The first investigation of the site by a trained marine archaeologist, his expedition discovered thousands of perfectly preserved artifacts of life in the 17th century city: silver and pewter ware; brass, iron and wooden tools; and much more, including two hoards of classic buried treasure: Spanish pieces of eight.

If you're a fan of pirate and buccaneer history, of the Caribbean, or just a history buff in general, I'd highly recommend this book. Bob Marx is THE preeminent authority on the Sunken City of Port Royal, Jamaica, an engaging author, and this is one of his best works.

Mr Marx does a great job laying out the lusty, drunken history of this blood-soaked buccaneer town, once the richest in the Caribbean, if not the New World. Through his archaeological finds, he paints a lively picture of the once-bustling city and brings to life the sea-dogs, whores, artisans, merchants, and other colorful characters that once called Port Royal home.

Additionally, the narrator of this book adds much to Mr Marx's already-exciting tale. Her recitation is all at once warm, engaging, and authoritative - perfect for the written word of one of underwater archaeology's top experts.

All said and done, I am VERY pleased I stumbled across this gem!