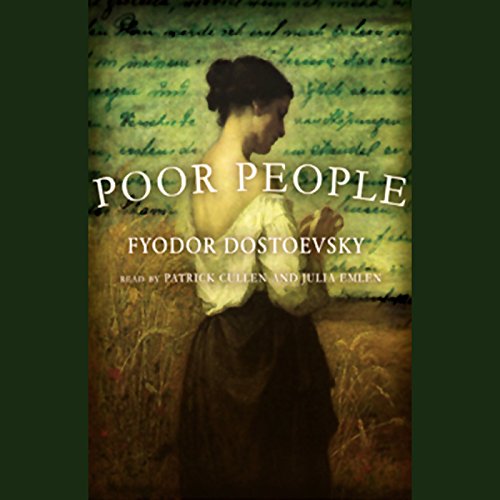 By: Fyodor Dostoevsky
Narrated by: Patrick Cullen,Julia Emlen
Try for $0.00

As both a masterpiece of Russian populist writing and a parody of the entire genre, Poor People is an early example of Dostoevsky's genius.

Written as a series of letters, Poor People tells the tragic tale of a petty clerk and his impossible love for a young girl. Longing to help her and her family, he sells everything he can, but his kindness leads him only into more desperate poverty, and ultimately into debauchery. As a typical "man of the underground", he serves as the embodiment of the belief that happiness can only be achieved with riches.

This work is remarkable for its vivid characterizations, especially of Dievushkin, the clerk, solely by means of his letters to the young girl and her answers to him.

"Patrick Cullen and Julia Emlen read the letters with deep emotion, exhibiting the love, frustration, and ultimate sorrow felt by the characters. Cullen's portrayal of Dievushkin's bouts of drunkenness, as well as his frantic efforts to save Dobroselova, are marvelous and intense." (AudioFile)
"On this excellent audiobook, the epistolary format is well presented by the single-voiced first-person readings of Cullen and Emlen. Both readers express the hopeless love and rage that the two correspondents capture in their heartfelt letters." (Kliatt)

What listeners say about Poor People

My Kind of Novel

My Kind of Novel

Ottawa - Over twenty years ago, as I was studying French literature, I followed a course entitled: The Inflence of Foreign Literature on French Literature. It is then that I was aquainted with one of the greatest Russian authors, Fydor Dostoevsky. I then read, Crime and Punishment, Karenina, The Brothers Karamazov, The Idiot... and was fascinated by this Russian writer who reminded me in certain aspects to Guy de Maupassant, also a pessimist philosopher in his study of life. Dostoevsky and Maupassant and Marcel Proust became “my kind of authors” (c’est mon genre!) to use a popular expression...
Recently, as I was crocheting a snowflake tablecloth, I was captivated by the reading of another Dostoevsky novel, “Poor Folk”
This story reports the letters exchanged between a poor old man and a poor young woman who live in the same housing complex but who rarely see each other.
“Poor Folk is an epistolary novel -- that is, a tale told as a series of letters between the characters. And oh, what characters these are! Makar Dievushkin Alexievitch is a copy writer, barely squeaking by; Barbara Dobroselova Alexievna works as a seamstress, and both face the sort of everyday humiliation society puts upon the poor. These are people respected by no one, no ...more. (Goodreads).
One of the first novels published by the author in 1845, it was published in a time when Dostoevsky was under financial stress. In fact, his sufferings transpire in his writings and remind me of everyday toils and worries which are similar to those experienced by the Russian writer who was proclaimed “the champion of the deprived and destitute”.

OKay in giving this one a "2" I'm also giving myself a "2." I usually like to read a book, even a classic, without background to get my immediate "Take" and then I might read more about it, background etc. if so driven. And though I've read "Crime and Punishment," I didn't know that Poor People was Doestoevsky's first work, and was not familiar with the story or what to expect. I absolutely recommend that American readers not familiar with the story-- familiarize themselves. Both because of the multiple characters involved with names that may blur together to our ears, and also because without background, the book quickly becomes tedious. I'm also not sure how well the epistolary novel translates into audio-- I think this is one of those forms that probably does better via written word vs. audio. I'll give this another try, and may append this review later if my enjoyment increases dramatically now that I've read more about the book -- but definitely recommend that anyone else who listens to this who doesn't know the background get it first!

Would you consider the audio edition of Poor People to be better than the print version?

The performance is excellent. I normally dislike audio books with more than one narrator, but given that the book consists of a series of letters between two people, it is appropriate to have a separate narrator for each, and it in no way detracts from the story. I have never read the print version, but I highly recommend this version

What was one of the most memorable moments of Poor People?

The most memorable moment of the Novel is the final letter, which I won't spoil, but the novel is full of great characters who face circumstances derived from their social and economic class, and their personal motivations. Despite the overall somber tone of the novel, there are many moments that will make you smile and even laugh.

So many great scenes to choose from, but I would have to say that I most enjoyed the part where Makar is called before the chief official of the government office where he is a copyist. He is embarrassed financially, and greatly concerned over his shabby appearance. After he is reprimanded for a mistake he made with an important document, just as he is about to leave, a button falls off his worn coat and rolls to the officials feet. It may not sound particularly iconic, but it is a very strong emotional moment that speaks to the heart of Makar's character and the sacrifices he is willing to make.

I had to stop myself from litsening straight through from start to finish without a break.

The language of this piece did not flow well. Perhaps the translation was a fault, but I found it difficult to enjoy.

I didn't like the story. It was boring I couldn't get myself to finish listening to this book

Solid story, hard to listen to for five hours...

For Dostoevsky fans, it's a good read. The narrator can be a bit difficult to listen to for a mere five hours, though. He has a sort of repetitious, stilted manner throughout the piece.

Praises the purity of poverty and exposes the corrupting elements of wealth.

The narrator Cullen did a fair job but his reading style interfered with my being able to believe the character.
I could see Dostoevsky in the book, but not like "Crime and punishment" or "Notes From the Underground".