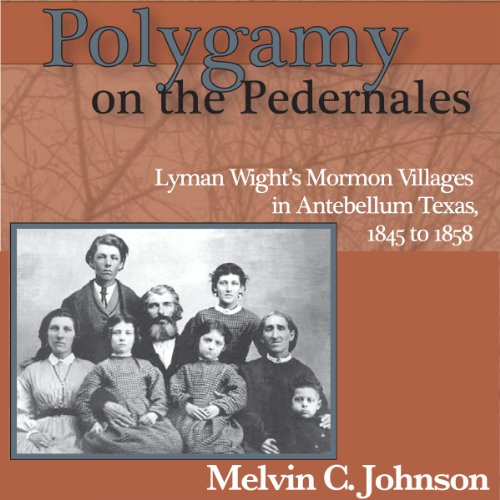 Polygamy on the Pedernales

By: Melvin C Johnson
Narrated by: Don Coltrane
Try for $0.00

In the wake of Joseph Smith Jr.’s murder in 1844, his following splintered, and some allied themselves with a maverick Mormon apostle, Lyman Wight. Sometimes called the "Wild Ram of Texas," Wight took his splinter group to frontier Texas, a destination to which Smith, before his murder, had considered moving his followers, who were increasingly unwelcome in the Midwest. He had instructed Wight to take a small band of church members from Wisconsin to establish a Texas colony that would prepare the ground for a mass migration of the membership. Having received these orders directly from Smith, Wight did not believe the former’s death changed their significance. If anything, he felt all the more responsible for fulfilling what he believed was a prophet’s intention.

Antagonism with Brigham Young and the other LDS apostles grew, and Wight refused to join with them or move to their new gathering place in Utah. He and his small congregation pursued their own destiny, becoming an interesting component of the Texas frontier, where they had a significant economic role as early millers and cowboys and a political one as a buffer with the Comanches. Their social and religious practices shared many of the idiosyncracies of the larger Mormon sect, including polygamous marriages, temple rites, and economic cooperatives. Wight was a charismatic but authoritarian and increasingly odd figure, in part because of chemical addictions. His death in 1858 while leading his shrinking number of followers on yet one more migration brought an effective end to his independent church.

What listeners say about Polygamy on the Pedernales