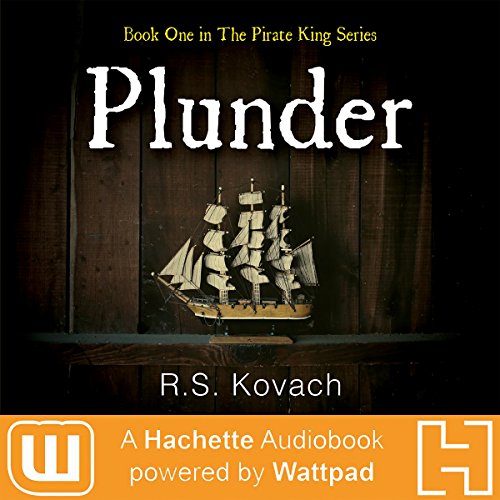 Plunder is a new release from Hachette Audiobooks: Powered by Wattpad - an innovative collaboration between Hachette Book Group and Wattpad. Your favorite online stories, now available in your headphones!

After pirates kidnap 17-year-old Ana in a case of mistaken identity, the orphaned housemaid prepares for the worst. Instead, playing the wholesome daughter of a Spanish admiral among ragtag buccaneers becomes the least of her concerns. Battles, a shipwreck, mutiny, and, most unexpectedly, love are what really turn her world upside down.

When the truth threatens to end Ana's adventures, it's the secrets of the dashing Alestair Kincade, pirate king of the Caribbean, that prove to be the most dangerous. Ana will need to use her wits and charm not only to stay off the gallows but also to avoid a fate she now considers to be worse than death: being sent home to Panama to a hopeless future.

What listeners say about Plunder

Fun listen for that boring commute

You get exactly what you'd expect from a pirate adventure - kidnapping, sword fights, and even a heist. The narrator does a great job with all the different accents, too! A fun listen all around.

Would you consider the audio edition of Plunder to be better than the print version?

The language and writing in both versions are excellent. The narrator, Charlotte Wright, is perfection as the 17 year-old maid.

What other book might you compare Plunder to and why?

Similar to Pirates of the Caribbean, but what I love is that it is told from a woman's perspective.

I have to admit, I'm a fan of romantic scenes.

Plunder is the story of a young woman named Ana who is pitted against the most ornery and dangerous men of her time—pirates. We immediately feel for Ana who sacrifices herself to save her mistress from murderous pirates. Throughout the story, with her intelligence and wit, she manages not only to survive, but thrive. Wonderful tale!

Can't wait for the next book and hoping that Charlotte will read the rest of the series.

This story was amazing it had forbidden romance as well as adventures and it was easy to follow. The author was really creative, I personally have never really enjoyed pirate books as I find the lingo hard to understand but I never really struggled during this story. I would recommend this story to 14+ as of the sexual references.

I am very excited for the next book to come out!!